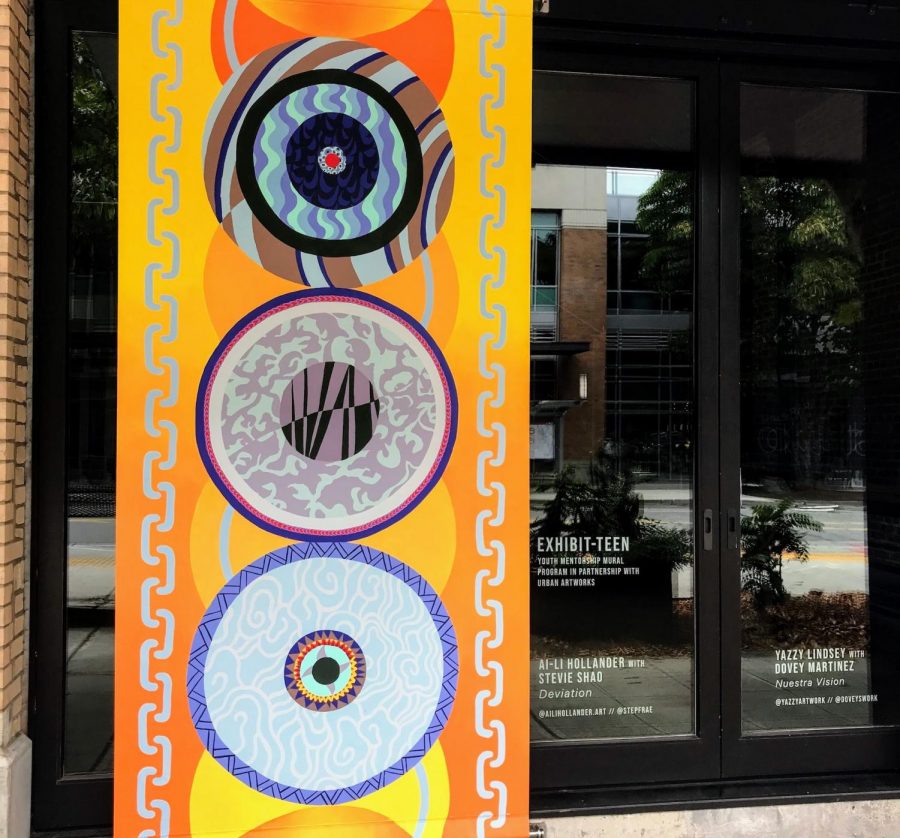 This past July, Ai-Li H. ’22 was one of two youth artists commissioned by the MadArt Studio to paint a mural for their building on Westlake in South Lake Union. The 158×58 inch piece painted on mural cloth was installed onto the studio’s facade from July 5th until August 31st and now resides with the artist herself. Ai-Li first learned about the mural opportunity through a mentorship program called Urban ArtWorks which she described as “an organization that engages youth and communities in the creation of public art.” Together, Ai-Li and her mentor Stevie Shao began to visualize what their product would look like: “It was clear that we were going to utilize my concentric circle motifs in some form. From there, I began to think about the composition.” Over the past year, concentric circles (circles with a common center) had become a staple piece in Ai-Li’s art. She started toying concepts in her Lakeside Drawing and Painting class where she crafted both 3D and 2D circles, unknowingly laying the groundwork for her future mural.

The mural itself consists of three separate concentric circles, which Ai-Li described as each “chronologically recording this time, with the topmost circle representing the beginning of the pandemic, the middle recording my day-to-day experience, and the bottom representing the beginning of reopening.” Ai-Li’s use of different colors, patterns, and “energies” are complementary and opposing simultaneously.. By including this contrast, she hopes viewers will see how “layered juxtapositions create harmony or discordance, reflecting the contradictions and layers of my emotions. When linked together, the circles are an exercise in introspection that translates my personal experiences into a visual language.”

The 21-hour mural painting process provided Ai-Li time to reflect on her art-making process: “I learned that I like to hesitate and take my time when making choices or writing, which can be a positive and negative thing.” On the other hand, Ai-Li believes that working with her mentor Stevie has shifted this perspective: “I saw that the mural painting process necessitated speed, and I did not need to be so precious with all of my decisions.” While she is proud of her work, Ai-Li cannot help but think about what different colors, patterns, or imagery she would alter now, an inner dialogue many Lakesider perfectionists can relate to.

In addition to working on her mural, Ai-Li served as a counselor at an Urban ArtWorks and Parkour Visions summer camp, where, in a reversal of roles, she worked as a mentor to a group of 9-12-year-olds who created their own mural. In the future, Ai-Li plans on pursuing art throughout college, but at present, she sees creating as a form of relaxation. While Ai-Li’s mural has since been taken down, you can visit her Instagram @ailihollander.art or Madart Seattle and Urban Artworks’s Instagram pages to see images of her piece.