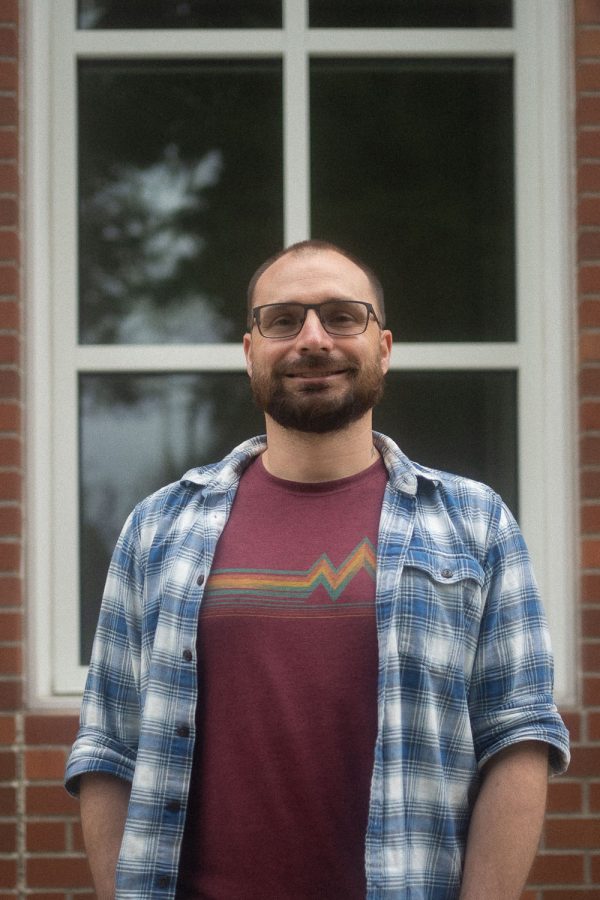 Dr. Dounas-Frazer, a new teacher in the science and math departments.

September has rolled around once more, and Red Square is buzzing with the energy of a new school year. This year, alongside the new freshman class, Lakeside is also welcoming many new faculty members.

Mr. Black will teach Physics and Honors Physics. Before coming to Lakeside, he taught at various independent schools on the East Coast, though he lived in Washington state 28 years ago. Besides teaching, he is also a lacrosse coach. After relocating back to Washington, he has been enjoying the Pacific Ocean view and going on hammock camping trips.

Dr. Dounas-Frazer will work with both the science and math departments, teaching Physics, Advanced Calculus-Based Physics, and Accelerated Calculus AB. Dr. Dounas-Frazer earned his Ph. D. in physics at UC Berkeley, where he “shined purple laser light on atoms and watched them glow green,” using the data to infer properties about the atomic nucleus. After completing his dissertation, he focused on teaching, as well as recruiting and preparing other physics teachers. “Eventually, I recruited myself into a teaching career,” he joked.

The science department is also welcoming a new chemistry teacher, Dr. Ramanan, who will be teaching Chemistry and Honors Chemistry. Originally from India, he spent a decade researching viruses and cancer biology after earning his Ph. D. in biochemistry. He switched to teaching science full-time and just relocated to Seattle from Mountain View, CA.

Katie Piper will be teaching Modern World and You and United States History this year. Ms. Piper is passionate about project-based learning, and she has spent much of her teaching career at the Bellevue School District as a history teacher, as well as a curriculum and instructional coach. Though originally from Baltimore, Ms. Piper has been in Seattle since 2001. She says that, in her classes, she “hopes to create opportunities for [students] to see themselves in the curriculum.”

Jiabang Wu will join the Chinese department this year to teach Chinese I and Chinese V (and Chinese A at the Middle School). Ms. Wu has a diverse range of interests: she majored in Chinese Language and Literature in college and earned two master’s degrees in Film Studies and in Education. Before moving to Seattle, Ms. Wu worked in Maryland as a lead classroom teacher in a Chinese immersion program. In her free time, she loves kayaking, hiking, and trying out different cuisines.

A new face in the physical education department will be Kyle Lawhead, the new physical education department head. Mr. Lawhead grew up in western Washington and studied at Western Washington University and Seattle University. After teaching and administrating at University Prep for 15 years, he said that he “found [him]self missing interacting with students in the classroom.” He is excited to join Lakeside and get back into the classroom. Aside from teaching, Mr. Lawhead has also been coaching volleyball, baseball, and basketball.

Mr. Campbell is joining Lakeside’s college counseling team from Pomona College. He is “excited to lean into [his] earthy-crunchy, granola self here in the Pacific Northwest, whether that’s deep in the woods, or with coffee and baked goods.” Originally from Springfield, Mass., he has worked in college admissions at Pomona College and the College of the Holy Cross. Mr. Campbell spent his summer in mid-coast Maine reconnecting with family while hiking, boating, and paddleboarding. He is looking forward to “connecting more intentionally with young people on a sustained, relational level.”

Ms. Foster came to Lakeside in February as a full-time college counselor. Born and raised in St. Louis, Missouri, she has mainly resided in the Midwest before her most recent move to Seattle. She graduated from Truman State University and earned a Master of Public Health degree from the University of Iowa. Over the summer, she embarked on a road trip across Colorado, Wyoming, Utah, Oregon, and Idaho to move to Seattle, which she describes as “the longest and most beautiful road trip I’ve ever taken.” Upon arriving in Washington, she hiked on the Poo Poo Point Trailhead, kayaked in Green Lake, and spent lots of time at Golden Gardens. Besides being an outdoors lover, she is also an avid knitter and houseplant enthusiast.

Mx. Nan comes to Lakeside’s college counseling department with a background in college admissions and as a youth programs coordinator with Asian American/Pacific Islander community-based organizations in the Bay Area, CA, and Philadelphia, PA. Mx. Nan loves good scones and is eager to get a dog as soon as possible. They describe some highlights of their summer as “seeing a family of otters while stopping on a bike ride across the 520 bridge, eating as many wild blackberries as I could get my hands on (and learning about tayberries!), and trying not to buy everything in the Wing Luke Museum gift shop.”

As Upper School Director Felicia Wilks expressed in the summer mailing, one of Lakeside’s strengths is a community full of “students and adults who choose to be here, learning and working together.” Lakeside is thrilled to welcome the extraordinary group of faculty joining us this year and looks forward to engaging with such a diverse array of passionate educators. Both within and outside the classroom, their presence will enrich the campus with energy and enthusiasm.