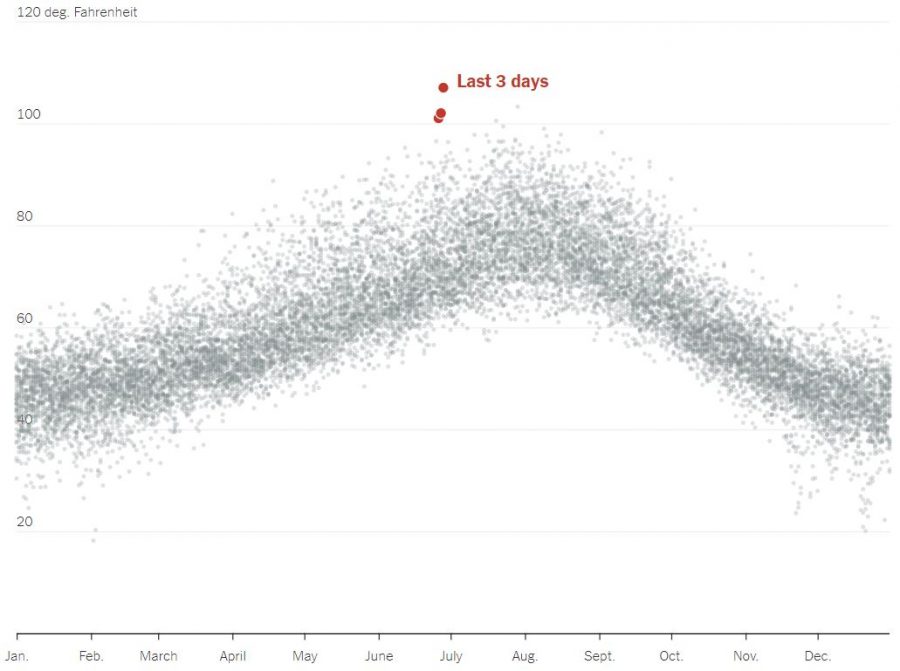 On August 9th, the International Panel on Climate Change released a report described by the UN Secretary General as a “code red for humanity.” The report confirms that, even in the best-case scenario of emissions reductions, weather patterns will become more and more extreme for the next three decades – a fact reinforced by June’s record-breaking heatwave and last September’s blanketing wildfire smoke. Historically, the Pacific Northwest has had a mild climate and is generally unprepared for extreme weather, but experts predict that as climate change worsens, Seattle will have hotter and more humid summers, increased annual precipitation, and an increased risk of flooding due to rising sea levels. With this in mind, climate change and Lakeside’s response to it will impact the school and its community.

Lakeside’s response to climate change starts with its facilities. In the past, summer heat has not been a major concern, which has rendered facilities unprepared to deal with it. The June heatwave established the urgent need for air conditioning on campus, as summer school classes had to be temporarily relocated from Allen-Gates to cooler buildings. The air-conditioned portables worked well to soften the effects of the heatwave, but being temporary, rented structures, they will need long-term replacements.

However, installing ACs in every classroom will be costly – in the millions – and old buildings like Moore Hall will make renovation difficult. It is also time-consuming to train employees and adapt to working in new weather situations. Head of Facilities Dan Dawkins noted that while the committee prepares for weather hazards at the beginning of every school year, the increasing dangers of heat and wildfire smoke are still relatively new occurrences for them. More extensive plans for the facilities are still in progress, and Mr. Dawkins sees a future with ever-changing plans, determined by the administration’s decisions and new lessons learned.

The philosophy of experimentation is reflected in the Tech Department’s work. While Technology Director James Britto and his department have been focused on using technology to adapt to the COVID-19 pandemic, many of their innovations also respond well to disturbances caused by extreme weather – namely, the Doublerobot.

The Doublerobot, which looks like an iPad on a segway, allows students who need to be remote temporarily (such as those quarantining because of a COVID exposure) to attend classes by connecting to it through a website. They can then see the classroom through the robot’s “eyes,” navigate the robot’s movements, and converse with other students directly. Focusing on community connection, the robot provides a physical presence for those not present.

And its applications for extreme weather and the delta variant have been tested: during the June heatwave, summer school students were given the option to stay home instead of going in person; those who did were able to participate through the robots. Based on positive feedback, the school plans to increase the number of Doublerobots from six to 26.

As Lakeside is one of the first educational adopters of this new technology, which is expensive ($3000 per robot), others will be able to learn from its experiences. Whether the adoption of Doublerobots is successful or not, it will help the school understand how to respond to a changing climate in a pragmatic way.