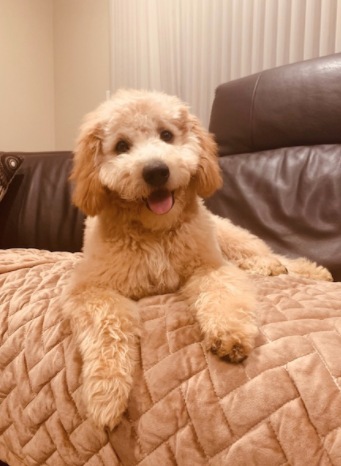 “My dog’s name is Nala. We got her in June of last year and she has brought BOTH chaos and joy into our lives! She loves to bark at every moving thing in front of our house, and times it perfectly so that when we unmute our mics on meetings, all you can hear is her barking! It’s been kind of stressful to raise her during a time that’s already stressful due to the pandemic, but there also couldn’t have been a better time, since we’re always at home! She makes me smile every day, even when I’m angry, down, or pushed over the edge with stress. She has hilarious quirks and is just the cutest when she’s sleepy!” – Anbini G. ’24 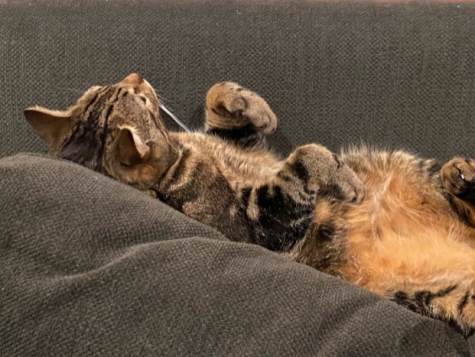 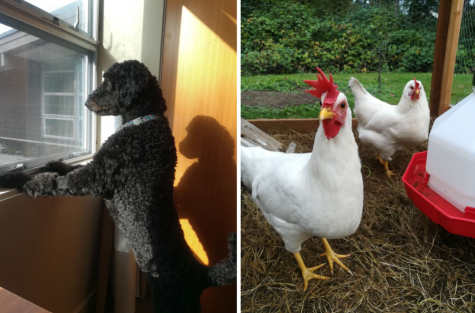 “We got SEVERAL pandemic pets! We got four chickens because my sister is an Animal Science major in college. They’re all grown up now and laying eggs, except my sister is off to college again, meaning I got saddled with them. I get to wrangle them into their coop and lug the several-hundred-pound coop around the yard with my dad when it’s time to move it. (Eleanor, Sourdough, Dinosaur, and Triple B).

We also got another puppy, bringing our total to three dogs. We got a puppy because our other dog had recently passed away, and I was hoping we could get a more…active dog (the other two are couch potatoes) to accompany us and get us outdoors. She’s known for her massive burps and the chaos she brings to the house. She’s a poodle, though, so she’s really smart—and we can SEE that she’s planning mischief.” – Samantha W. ’21 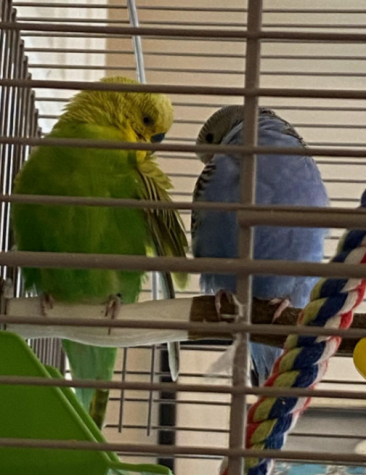 “We got two parakeets. At the beginning they brought chaos as we were not aware they would be so talkative, messy, and try — and succeed — to escape from their habitat. However, recently when we have meals in restaurants or in hotels, we miss their chirping. They bring a component of joy to the kitchen, and they are super cute. After the first couple of weeks of quarantine, they became comfortable with us. They started chirping during all of our meals, until their little bickering went from, surprising, to annoying, to familiar. When we go somewhere without the birds, one thing we miss is definitely the echo of their chirps. They brighten up the house and open up room for positivity and jokes even on the worst days. After a while though, our green parakeet, Juliet, began to outsmart her “bird-proof cage” undoing the lock with her beak and flying around the house. The blue one always stayed inside but few around in her cage when this happened. All of my family had meetings or classes where we had to switch rooms while the rest of us try to lure Juliet back to her cage. We got a better, bigger cage to train her, and she has stopped this. She is very spirited though! The blue one, Romeo, was always calmer. But, when we play music he always matches the beat of it with his chirps and even some dance moves. He also plays with this basketball-for-birds hoop that we got him, and it’s always so amusing to see! Both birds have brightened up our lives and homes during quarantine and put us through some adventures.” -Iris O. ’24

“I got a horse. Now my mini pony Daphne has a best friend. The best chaotic expensive decision of my life.” – Anonymous

“We got baby chicks! They brought and are still bringing both joy and chaos” – Anonymous