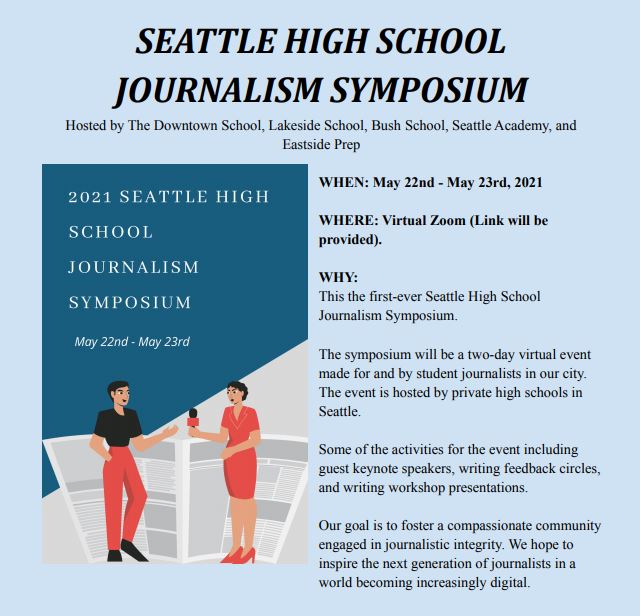 On May 22 and May 23, high school student journalists from several Seattle schools gathered in a Zoom meeting at the first Seattle High School Journalism Symposium. The goal of the student-organized event was to connect different high school newspapers to discuss journalism, school cultures, and the pandemic’s impact on their respective papers.

The symposium, the brainchild of Farah L-A. ’21 and executive team members from the Downtown School and Lakeside School, also involved students from Seattle Academy, Eastside Prep, Seattle Prep, and University Prep. Farah, the Editor-in-Chief of the “Downtown Post,” said that the program aimed to “provide an affordable, accessible, and fun opportunity to unite journalists across the Emerald City.” As a passionate journalist and an editor-in-chief, she was curious about how other schools operated their student newspapers, and felt troubled by “the lack of unity among student journalism outlets.” This led her to reach out to members of the Tatler staff to host a symposium.

Planning and logistics started in early April. The executive team met weekly to brainstorm potential activities, reach out to other schools, and organize an itinerary. Through personal connections and numerous cold emails, the team got in contact with more than five high school newspapers. Many of them expressed interest in the event, and sent their staff writers to join the planning sessions.

Besides connecting with potential schools, another challenge encountered by the executive team was understanding the differences among the various student papers. Some newspapers were understaffed due to the pandemic, and others were shifting to a web-only format. Some schools did not have a traditional newspaper at all, only a literary magazine or writing club. It was important to accommodate and adapt to each school’s differences so that they all could bring their best to the table and share their unique insights.

The two-day symposium began with a guest lecture from Knute Berger, a Lakeside alumnus and the editor-at-large of Crosscut, an independent news site based in the Pacific Northwest. Mr. Berger introduced his role within the organization and delved into the importance of local community-based reporting. He also shared insights about how local historical events were often linked to current affairs.

Another highlight of the symposium was a series of “workshops” in which journalists from each school gave presentations on various topics. Tatler staff writer and section editor Stellan M. ’23 commented: “seeing other schools’ newspapers gave me a greater perspective on the variety of ways that school newspapers can be effective and the goals that Tatler should have for the future.” He also noted that the showcases gave him inspiration for “elements that would add more dimension to [Tatler], such as podcasts and long-form articles.” Farah agreed with this sentiment, saying that one major takeaway of the symposium was an appreciation for “the diversity in the journalism field,” as well as a sense of community and support among student journalists.­­­­­­­­­­­­­­­­­­­

Because we are constantly bombarded with national or international news, coverage of local events rarely captures our attention. A student-run school newspaper such as the Tatler bears the obligation to cover events at the microscopic scale of a school community. At the same time, this local reporting provides a nurturing environment for future professional journalists. The Seattle High School Journalism Symposium was the fruit of student-driven efforts to connect a diverse group of student journalists, share their areas of expertise, and bring together a supportive community.