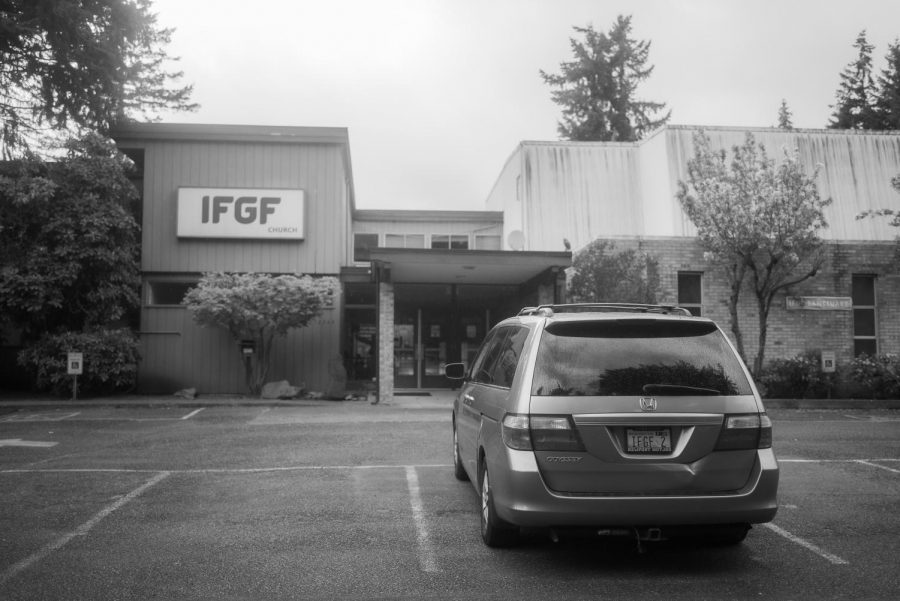 My family didn’t quite receive Southern hospitality on our last trip to North Carolina. En route from the Charlotte airport to neighboring Asheville, we stopped at a small bar off the freeway, hoping to get some dinner after the five-hour flight. As my Korean dad walked onto the deck, I heard someone exclaim, “what the hell?” as if an alien had just beamed down. A flurry of slurs were subsequently hurled at us by a heavily intoxicated group of white North Carolinians as my family and I hurried back to our car, shocked and strangely embarrassed. My dad, used to the occasional anti-Asian slur, seemed to shrug off the incident quickly. However, my eyes had just been opened to some of the harsh realities of being Asian in America. The incident lingered and nagged at me for days after. Some of the hate speech was predictable: imitations of martial arts noises or the occasional degrading threat to my dad. However, one of the more memorable epithets used was when one person yelled, “it’s one of those Siamese motherf*****!”, a term so confounding and odd that it made my family view the demeaning experience in a somewhat more comic light.

As we did more research, we discovered that the term wasn’t random. After their days in the circus, Chang and Eng, conjoined twins from Thailand who originated the term “Siamese twins,” had in fact moved to the same region of North Carolina that we were in, where they married sisters and raised twenty-one children together. The man who had called my dad “Siamese” may have actually believed that we were the offspring of Chang and Eng. Like Chang and Eng, the man saw our very existence as a circus act, a freak show, something to be gawked at and exoticized.

This incident was the only time where I’ve been called racist slurs and physically threatened because of my Asian identity. If anything, I’ve experienced more inner conflict of feeling not Asian enough than external discrimination for being too Asian. And while my immense privilege has shielded me from much of the bigotry that many Asian Americans experience every day, some will still view me as foreign or an invader. Though these hate crimes seem like a recent development, they are born out of the deep-held belief of many that we are foreign and will never be American enough. They really mean that we will never be white enough.

One of the events that significantly changed my understanding of being an Asian American female was a little more than a month ago — the Atlanta spa shootings, in which eight people were killed, six of whom were Asian women. I remember feeling paralyzed from shock when I first read about what had happened.

Never in my life had I felt scared to be an Asian female in the United States until that moment. And when I heard the reasoning behind the shooter’s motivation, I was disgusted. The shooter had denied that the crime was racially motivated, instead blaming his sex addiction and his need to “eliminate his temptations.” This just goes to show how hypersexualized and fetishized Asian women have become in the U.S. To know that my race has been dehumanized by people like Robert Aaron Long — labeled as temptations to be eliminated — is sickening.

It’s important to note that racism against Asians has always existed in the U.S. Even here in Seattle — a city known for being more progressive — multiple attacks against Asians have occurred since the beginning of the pandemic.

My grandparents, who were highly educated doctors in their respective medical fields back in Korea, struggled to find jobs when they first immigrated to America because they were Asians in a mostly non-Asian city (Chicago) in the 1960s. In addition to that, they were also often called racial slurs and were even verbally harassed on the streets.

While my experience with racism has not been quite as extreme as that of my grandparents, I (along with many others in my community) still often face things like harmful stereotypes and microaggressions directed towards Asians or Asian females (especially now, with the coronavirus).

Actions like reposting Instagram infographics or something relevant that you might have screenshotted on your Snapchat story are definitely a start towards fixing this problem, since they can often spread useful information to the general public. But I urge Lakesiders to go beyond these actions, which are so often solely performative. For example, if you know someone that might be emotionally affected by a hate crime against their race, such as the Atlanta spa shootings, check up on them to see how they’re doing. I know that talking about how I felt about current events with friends that cared really helped me process things.

I know that most people probably hear this all the time, but if you hear someone say something that is bigoted or racist against a group of people, speak up against it. A racist thought can later turn into a hate crime if left unchecked by society.

I mentioned before that my perception of my identity as an Asian American female has shifted dramatically. In no way do I feel ashamed of my race or its history. In fact, the events of the past year or so have made me want to stand in solidarity with my fellow Asians and Asian-Americans, since we need each other’s help and support during this harrowing time. I am determined to show people that Asian females are more than this hypersexualized, fetishized caricature that America has so often seen them as.

This time of COVID-19 and quarantine has brought many issues of racial inequality and discrimination to light in the U.S. I truly hope that we can use this time of uncertainty to permanently change our society for the better, and I wholeheartedly believe in the Lakeside community’s ability to help the world take a step towards this change.

I remember first reading the news about the Atlanta spa shootings and feeling numb. While deeply saddened, I did not expect much to happen. Hate crimes against Asian Americans are oft-unnoticed and deplorably underreported, microaggressions and fetishization are still widespread, racist caricatures are still second-nature to many Americans, and the model minority myth remains a common racial stereotype. I did not expect a response because I was disillusioned with the United States’ ability to handle racial crises and people’s capacity to care about each other after the events of this past year.

But, I was deeply relieved to find activism in my community. I learned more about the history of Asian American advocacy and their invisibility in Civil Rights history, as these movements were the logical evolution of the Asian community’s steady advancement of unity and action. I attended a Stop AAPI Hate rally in the Bellevue Downtown Park, and another at the Seattle Center. Several Asian American leaders around Seattle gave speeches, pushing for change and convincing others to fight for it. In addition to confronting various stereotypes, obstacles, and invisibilities, there was a focus on solidarity for Asian women, whose history as being long-targeted for racial fetishization and sexualization was epitomized by the Atlanta shooting’s inception as an act of “sexual frustration.” To quote Eric Nam’s, a Korean-American singer-songwriter and entrepreneur, much more eloquent words, “To dehumanize the lives of eight individuals because someone was, as the sheriff’s department spokesman put it, ‘having a bad day’ or to blame their actions on ‘sex addiction’ is the height of white privilege and reveals the depth of the over-sexualization — and objectification — of an entire race’s gender. Why are women of our community the outlet for and victims of your sexual addiction?”

I felt one aspect of these movements was especially important: the emphasis on ending bystanderism. This focus was noticeable in the AAPI community leaders’ speeches, such as pastor Michael Lee who spoke on committing oneself to change in the first place, then continuing to act for change beyond simply showing up to a single event.

To clarify, Asian American activism is astounding. Solidarity among the communities is and has been abundant, and its erasure throughout history is unfortunate and deplorable. This phenomenon of bystanderism is simply one I’ve witnessed; I personally know Korean American family and friends who have stated that recent high profile hate crimes didn’t “apply” to them. I can speculate about this phenomenon.

In my experience, I’ve found that Korean American immigrants often build themselves up on a concept of “hard work.” It’s an Asian American, and moreover, immigrant stereotype, but it is a genuine Korean cultural belief that hard work is rewarded by success. To severely oversimplify, one’s worth is based on the “effort” they put into something. This form of classism is by no means exclusive to Korean society — this idea of good fortune rewarding hard work is the backbone of most Western societies, with wealthy people of all nations and races losing touch upon achieving some form of extravagant wealth or success.

Additionally, the targeted spa had been targeted by prostitution stings, and many pointed to that as the reason for his crime. This form of victim-blaming is most overtly a gender issue, both as a matter of the fetishization of Asian women and general taboo around sex work. I have found the latter used most extremely to justify the murder of eight people, but occasionally as a justification for why people would not be interested in this movement. To some, the women killed in this attack were somehow lesser due to their social stature and being targets of prostitution stings, and thus obviously in a different category. Needless to say, this is not the case. I know a successful Korean American engineer who got a perfect score in the Korean college entrance exam, a feat deemed nearly impossible, that was punched in the face and told to “go back to where he came from” while jogging near Seattle. His family never found the perpetrator, as they didn’t want to cause a scene. This experience is obviously anecdotal, but it demonstrates the basic reality that racists target people based on race, which I feel some people are either oblivious or purposefully ignorant of. Regardless of social stature, all members of a marginalized minority group can experience said marginalization.

At the end of the day, however, these are conjectures based on the experiences of one Korean American teenager. And those I speak of are a small number of bystanders surrounded by many, many others on the front lines. And they themselves have countless reasons to not participate in movements, and it should not be the job of those that do to shame others into doing so.

In September I wrote of “Sa-I-Gu,” the 1991 LA Uprising that exacerbated an already-widening gap between Black and Korean communities, LA and elsewhere. As that article was an issue of interracial solidarity between different groups, as opposed to the current situation requiring cooperation within the Asian American communities, the situation is entirely different. A shared element, however, is the activism of various Korea/Asian American leaders who chose to communicate, bridge gaps, and act in favor of change. In that respect, modern movements have improved upon that significantly. I sincerely hope that as more ground continues to be made, those few that have the freedom to act, but remain on the sidelines, choose to step in.