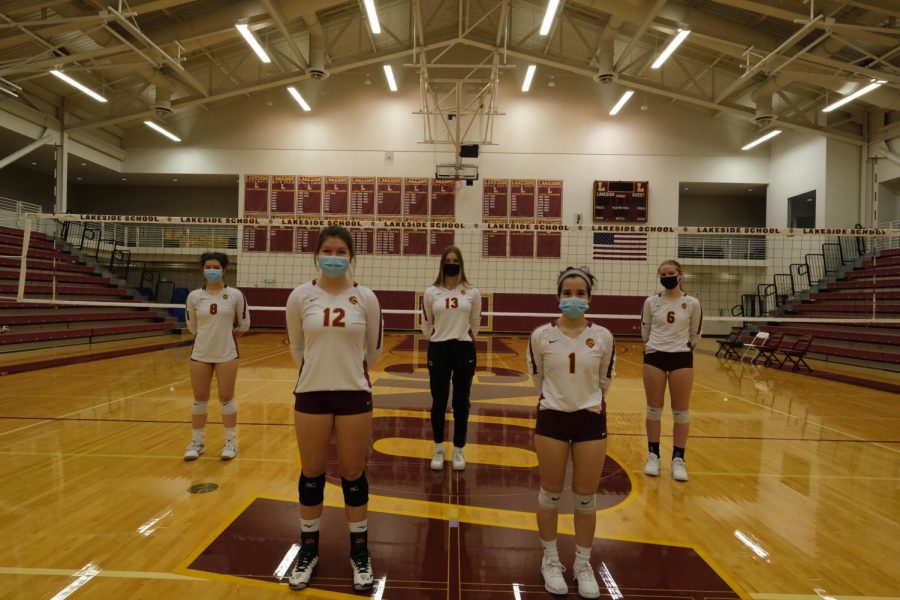 It’s safe to say that for most seniors, this has been the most confusing, if not the most challenging year of their high school careers. For much of the year, they were stuck behind computer screens, unable to come to campus, and unable to see their friends. As pandemic was raging around the world, playing sports was most likely on the back of everyone’s minds. In fact, for many seniors, playing sports didn’t even seem like a possibility. Seeka C. ’21 recalls her initial thoughts about a potential volleyball season: “I didn’t think we were going to play. Two of my teammates and I had a little group chat, and we were already mourning the loss of our season.” A little more bullishly, football player Max D. ‘21 said “by the time September came around I was pretty pessimistic about our chances to play, but still a little hopeful.” Expectations were low and it seemed like hope for a sports season was all but gone. What made it worse was that sports meant a lot to these senior athletes. For David W. ’21, sports had always been “a place where you can be the best version of yourself at something.” As well, “going through adversity in sports brings people together. You get really tight knit communities when you all go through something together.” For Eric Y. ’21, “At Lakeside, sports has been a community, therapy, and a way to see personal improvement.”

On January 14, Mr. Hartley sent a school-wide email announcing the return of Season 1 sports. Student-athletes, especially seniors, for whom this would be their last season, rejoiced. When Seeka and her teammates got that email, she said, “we were so excited. We knew that there were going to be many restrictions, but even just having the season itself made the year feel a little more normal.”

Fast forward multiple months, with Season 1 finished and Season 2 already under way, seniors now have a chance to reflect on their final year of fall Lakeside sports. For Max R. ’21, “It was an escape… Exciting things were happening for the first time in a year. It meant a lot to me that Lakeside was able to bring it back and I”m so thankful they worked so hard to do it.” Max says, “A lot of my favorite memories from high school come from playing sports, and at first it felt like I was robbed of the opportunity to create those memories with my teammates and coaches…. I’m so happy I got the chance to carry out a season.” David similarly reflects that “sports is what I look forward to especially during the remote weeks because I know that I’ll be able to go on campus and see my friends and compete. We’ve been missing it for so long and I’m just really grateful that we have the sports season.”

During this challenging year, being able to participate in athletics has brought joy and excitement to Lakeside’s student-athletes. None have felt this more than the seniors, to whom, in their final year, sports has brought back a sense of normalcy.

Finally, Seeka would like to give a shoutout to all her teammates, and “how amazing they are through everything they’ve gone through,” and Eric has some wise words for younger student athletes: “make your four years great because you won’t get them back.”