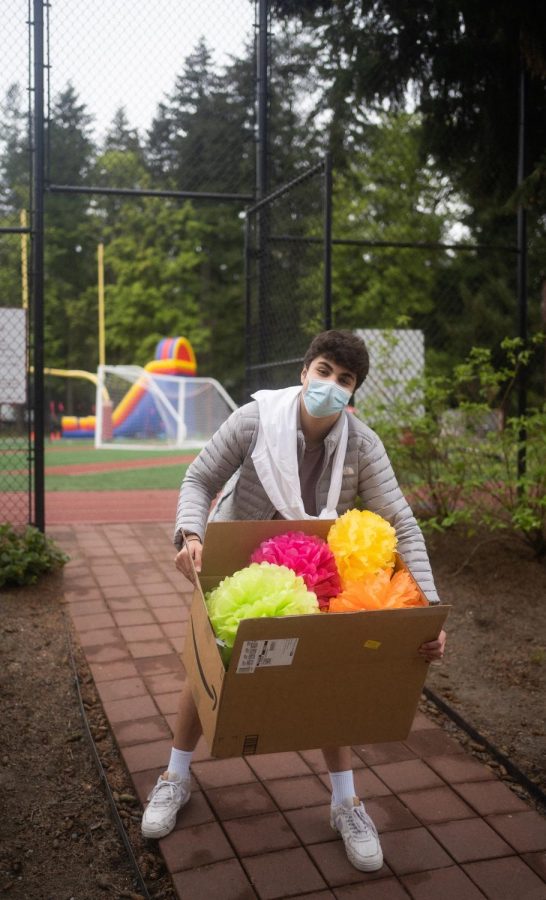 The tradition of May Day at Lakeside has undergone many changes since its inception. Originally, it was a day for completing off-campus community service projects in advisories. In 1992, three years after the creation of Student Government, it began to transition toward its current iteration: afternoon festivities and games (including sumo wrestling!) following a morning of community service. With less community service and more fun traditions, May Day became a celebration of being close to the end of the year, until, of course, last year. Following a brief hiatus on Zoom, May Day celebrations were back in person this year (mostly), and the planning for this event looked different from any May Day in the past.

Planning for this year’s May Day began in earnest back in February, a similar time to what it would take normally to plan the events. However, this year’s event consisted of two May Days, one for each cohort. Stud Gov divided into eight groups to plan the events. The apparel group selected Caileen W. ’27’s and Dahlia S. ’23’s designs for the May Day T-shirt from a range of student submissions and made wristbands to distribute. A plan to design and give away masks and hats was eventually scrapped due to time constraints. The second group worked on inflatable buildings, a staple of May Day. To do this, they worked with COVID Health and Safety Officer Bryan Smith to find structures that minimized congregation. The third group planned the cake competition, which was held in person with student judges and streamed on Zoom. The decorations and entertainment groups coordinated the “Music Day” theme throughout campus, with the latter planning the talent show: this involved recruiting student performers, coordinating equipment, and establishing various precautions, such as protective equipment for playing wind instruments or singing. Two more groups worked on games and food, and the final group designed remote activities, which were also meant to be watched later by students who missed them in person.

In some ways, there were two May Days going on at once. For remote students, there was a rotation of games separate from the events for in-person students. A feature of the day was a game meant to involve both remote and in-person students: “Are You Smarter Than a High Schooler?” The brainchild of Rishi L. ’24 and Jibreel B. ’24, the event pitted teacher volunteers against questions that other teachers have asked students in their classes. Other remote games such as poker were chosen for online activities. The remote activities were intended to be separate from the in-person ones, recognizing that most in-person students would probably prefer to enjoy in-person activities as opposed to being on Zoom.

The planning of May Day revolved around giving students a celebratory end-of-year experience that felt somewhat normal despite the circumstances. In the words of Student Government President William M. ’21, “in a year when we’ve had to sacrifice so much, we deserve a celebration. If there is a way to do it safely, let’s go big.”