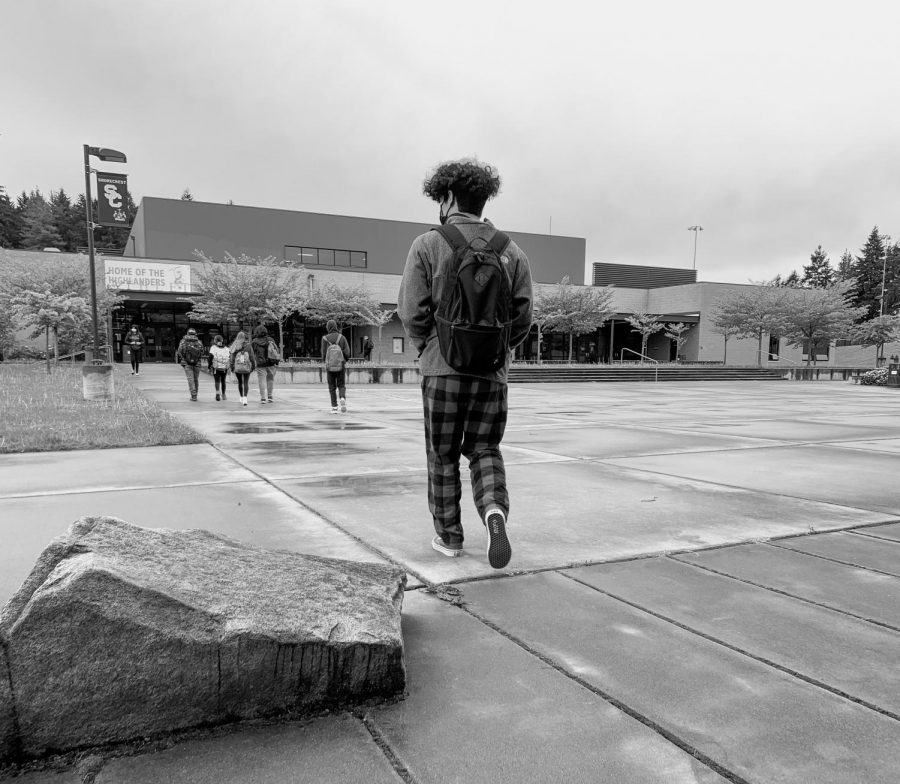 On Wednesday, March 11, 2020, Hamilton Middle School students were sitting in fourth period when an announcement came over the intercom asking teachers to check their emails for an important message from the district. The tension around COVID-19 had been building up, with private schools around the county announcing their shutdowns the week before. When that announcement was made, the students all knew what it meant. Half the class erupted into laughter and excitement, and the other half sat there silently.

By now, the world knows that this did not end up being just a two-week-long break, as over a year into this pandemic, public schools in Shoreline and Seattle have just begun their reopening for middle and high school students. In Seattle Public Schools, reopening has been a hot topic for the last few months, during which the teachers’ union has negotiated with districts on the safety and importance of reopening. Before the vaccine was widely available and vaccines were allocated for teachers, many did not want to return to teach in person over fears of being exposed to the coronavirus. Even now with teachers being vaccinated, there are still questions relating to safety, such as building ventilation system efficacy. In a January survey, 37% of the teachers’ union Seattle Education Association members expressed their belief that in-person learning should not happen until the fall. Both the school district and the union have had concerns about the equity of reopening, with a survey showing that white families were much more enthusiastic about returning to school than Black or Asian families. Before Governor Inslee’s emergency proclamation requiring schools around the state to offer hybrid learning, the district taught fewer than 150 students in person (mostly in special education programs) and ranked around 200th out of 295 Washington State school districts in the number of in-person students, despite being the largest district in the state.

In his announcement on March 15, Governor Inslee commented on reopening public schools: “If I had a nickel for every excuse I have heard for not giving our children on-site instruction, I would be a millionaire at this point. These excuses are getting just a little bit tiresome.” Under the governor’s plan, schools are required to offer students in-person learning for 30% of total instructional time, with families being allowed to be fully remote if they choose. Following Governor Inslee’s proclamation, SPS middle and high school students enjoyed their first week of hybrid school starting the week of April 19th.

At Lakeside, students have been on-campus on and off every week since February. Students at Lakeside have the privilege of learning new material in each of their classes on campus – in-person students at SPS are only supposed to review and practice previously learned material. Lakeside’s schedule is typical of a normal school day, whereas Seattle Public Schools have a different schedule, with students going to school twice a week and their in-person school days beginning mid-day, with online learning in the mornings. While in-person students receive live instruction and feedback, remote SPS students have a period of asynchronous time, not entirely different from what happens at Lakeside when a class is geared towards students on campus. SPS students are also unable to participate in much of the interactive, physical learning that is possible at Lakeside. These inequities are due to budget restrictions and equity concerns: for example, a major difference between the two reopenings is the lack of COVID-19 testing and a contact tracing app at SPS. However, there is a health questionnaire similar to Lakeside’s Magnus Health screening that students complete each morning.

As an example, according to Ballard High School students, during their cohort’s two in-person days, they have three forty-minute Teams classes in the morning. These classes are typically teacher lectures, and very little hands-on work. Then, they have a brief lunch period, at the end of which they are expected to be in their classes on campus. Parents and guardians must either take time out of their days to drive students to school, or students must take the bus or walk. Students express that this makes their single break of the day even shorter. In person, students then have the same three classes in person for 75 minutes each, with no breaks. Since teachers are responsible for both in-person and remote students, in-person learning covers similar material to online classes. One student mentioned “We’re working with people who are online, while we’re in school, so we pretty much just do the same thing they’re doing. There’s not really a difference, other than the environment you’re in.” However, she does describe some benefits to this in-person learning system, such as being able to do group work and being able to actually play together in music classes.

A new reopening plan and especially its half-day nature has created logistical challenges for many Lakeside families with students in public schools. Tatler Poll respondents expressed that the SPS reopening had thrown some of their well-established logistics habits into disarray. “It’s chaos. The focus is all on my sister, which is exactly as it should be, because it has to be,” one respondent said. “We’ve had to cancel many plans so we can figure stuff out.” Another mentioned having to balance their sister’s transport to school as well as their own. Others’ plans remain relatively unchanged owing to the ability of many SPS students to walk or bike to school instead of being driven. Overall, Lakesiders expressed feelings of happiness and gratitude on the parts of their siblings, who have finally been able to enjoy parts of what Lakesiders have been able to for the past four and a half months.