OBAMA Proves the 44th President Was an Artistic Genius 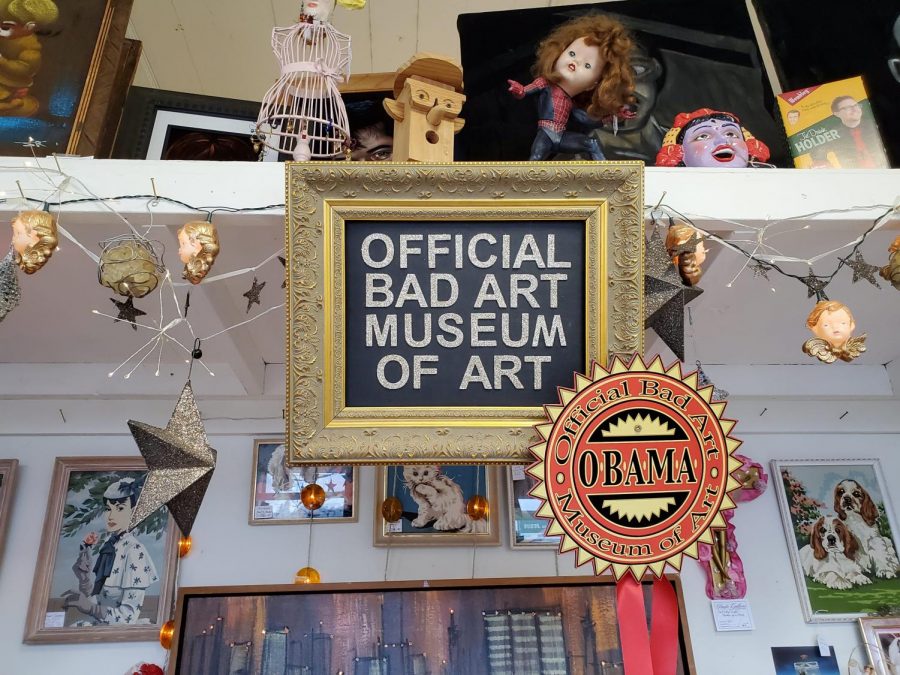 It has been 12 years since Barack Hussein Obama II was elected for his first term as the 44th President of the United States. However, one topic regarding Mr. Obamacare most seem to gloss over far too often is his artistic prowess. After all, we all know that you can’t be a good leader without being a good artist, right? Right?

Alas, my endless searches have finally been awarded. Introducing OBAMA: the Official Bad Art Museum of Art. And truly, the moniker “Bad” was propagated by the Fake News MediaTM in an attempt to smear the ex-president’s iconic artistic ability.

Unfortunately, due to limited space, there is only a single small room to detail the absolute majesty of OBAMA.

First thing to notice is the abundance of both Jesus and Elvis. After all, everybody knows the theories that Elvis and Jesus are related, or even the same! Jesus said “Love thy neighbor.” Elvis said “Don’t be cruel.” Jesus is the Lord’s shepherd. Elvis dated Cybill Shepherd. Jesus walked on water. Elvis surfed (Blue Hawaii, 1965). You know who else surfed? Barack Ohana. Truly a stroke of genius.

Another is the bust of Obail painted as Heath Ledger’s Joker, which masterfully represents how we Live in a SocietyTM.

Hone in, finally, on the abundance of Elvis. And you might wonder, what’s the significance of the King in relation to 44th President of the United States Barc Husse Ohanda? If you do basic research you’ll find that it is due to an overflow of art from the 50th anniversary of Elvis’ death. However, this is only partially true; in fact, all of the art you see was created by Mr. President Bark Gmail himself! Truly, the stroke of artistic genius, to impersonate the entire population of Seattle! Of course, there’s the heavy-handed symbolism of Elvis as the King, with “king” meaning “the male ruler of an independent state, especially one who inherits the position by right of birth”. However, if you aren’t an absolute baby and do some actual research, you’ll discover that the Old English word for king was in fact “cying”, which sounds an awful lot like “crying”. You know who cried for the sins of his people, eventually sacrificing himself for their redemption? That’s right, Mr. Bronx Obbamna himself.

But the true genius lies if you look closer: you see, if you look at the space between Elvis’ enchanting eyes, zoom in, tilt your head 2.4 degrees to the left and breathe out for three seconds, you’ll notice something odd: this art, this art is bad.

But before you cry out “heresy!” and behead me for such treason, hear me out: this is all part of Barac Ohama’s brilliance! With the bad art of Elvis, he is saying that with 50 years gone by (time passing), the King has lost his image, and is a distorted image of his former self! You know what else has been diluted with time and made and remade in its original form over time? The United States of America, of which Barnk Omnana was the president of for eight years, 12 years ago, as the president!

Truly, Barraque Oshawa’s radiance as an artist and philosopher shines through. And if you wish to gain further insight into Broccollini Obababamama’s true artistic genius, pay a visit to the Official Bad Art Museum of Art at the Pacific Galleries at SoDo. Not sponsored or anything, but tell me one other place where you can get a 20 MPH sign (legally). Tell me. That’s what I thought.

And don’t even get me started on The Regal Umbrella Museum of Pampa (TRUMP).

See the museum for yourself: https://photos.google.com/share/AF1QipMqMIOyPS-Sne2P0nStmHON5y-R2Q1fGFBbnxqqUdjRfDUgQmy5kA-gnMwrOAHHFg?key=U3NCTFFFeTVnYlJWcHl4alhVZ2puUWtZZGxJQ25B