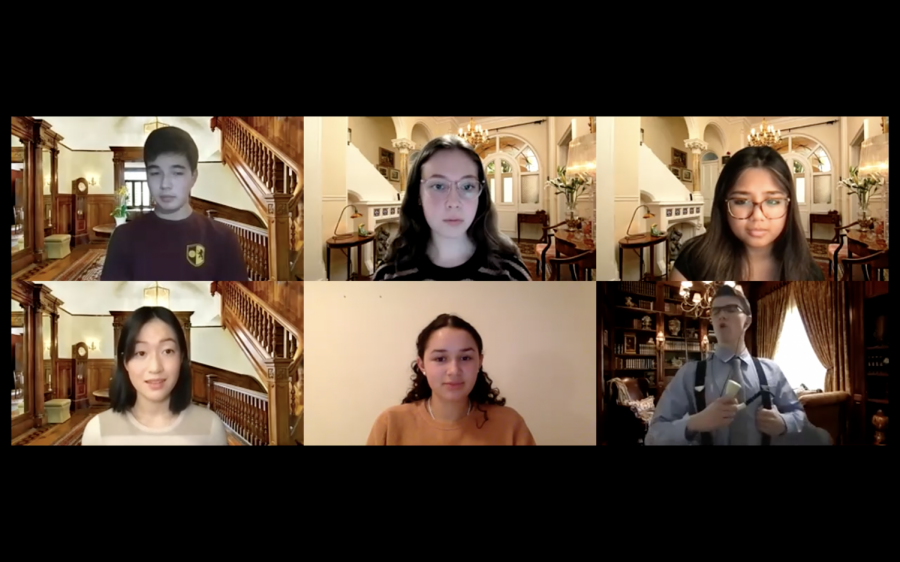 As Mary Poppins descends down to dreary, industrial London by umbrella, it’s clear from the opening minutes of the movie “Mary Poppins” that she is not the normal nanny that one would find in such a mundane setting. Throughout the 1964 Disney classic, conventions are broken and expectations subverted, with Mary Poppins showing the stern Banks family the importance of warmth, playfulness, and imagination through her eccentric personality. The making of the movie changed the audience’s idea of what was possible as well with the integration of live-action and animation in the film, a remarkable technological feat for its time. It’s fitting, then, that Lakeside’s musical this year is “Mary Poppins,” attempting to bring the same sort of whimsy and magic to the often tedious Zoom as Mary Poppins does to the Banks family.

“Mary Poppins” wasn’t always the director Micky Place’s choice for the musical this year; initially, he wanted to put on a production of the musical version of “Titanic” for its wealth of ensemble roles and vignette-driven plot. While “Titanic” is not entirely unfitting for the times, Micky quickly realized that the choice may be too darkly ironic and pivoted to “Mary Poppins” after seeing the joy that the movie sparked in his children. “There’s something about the joy, the color, the buoyancy…that felt really congruent with what the community is hungry for right now,” Micky said with a grin.

In addition to being a colorful, vibrant musical, “Mary Poppins” was chosen by Micky for its message of healing and catharsis, which is especially apparent in the stage adaptation. While the movie version can sometimes feel like it relies more on cartoon penguins and Mary Poppins’ zany exploits rather than character development and nuance, the musical adaptation focuses on the character arcs of the Bankses from a dysfunctional family to a loving and playful one. Underneath the layers of Disney pizzazz lies a rich story of warmth and heart, of family and love, and of personal growth and improvement in trying times, messages that feel relevant to our community right now.

For Micky, finding the nuance and depth of the story means exploring the potential of danger that the Banks children face that lies beneath a seemingly light-hearted story: “With that possibility of disaster, the triumph that results in the play, felt a little bit sweeter, a little bit deeper and richer because the stakes felt a little bit higher.” To focus on the triumph and growth of the Bankses, Micky is trimming down the musical, cutting extraneous songs that don’t service the plot.

Putting on a musical through Zoom doesn’t come without enormous technological challenges, however. While the drama department’s fall production of “Love and Information” was able to be a live performance on Zoom, it is virtually (no pun intended) impossible on Zoom to synchronize music and perform a two-hour-long musical live. As such, Micky made the necessary decision to turn the musical into an entirely recorded experience, making the production process more comparable to filming a movie than staging a traditional musical. Creating a recorded musical also means taking on many of the technical challenges of filmmaking, such as filming, editing, and mixing sound.

While rehearsals for the musical typically last a few months, this year’s musical is shortening that rehearsal time to just four weeks, redirecting focus onto filming and editing. Rather than spending time becoming comfortable enough with delivering a live, non-stop performance multiple times, this year’s cast members will be able to learn and forget sections, as all that is needed is one good take for the recording. While this year’s cast won’t become as fluid performing the entire show straight through, Micky says that actors will be able to explore the intricacies of each scene in this new format more so than in previous years: “I think it’s going to be really exciting for actors to get a stab at the same moment three or four times in a row to find out what the depth of that moment can be.”

Even with all its challenges, filmmaking has its advantages. While this year’s production sacrifices the thrill of adrenaline produced when performing for a live audience, filming this year’s musical will allow Micky to incorporate special effects and stylized color palettes, additions that Micky hopes will give the musical some of the magic that “Mary Poppins” is about. Additionally, editing helps Micky and music director Chris DiStefano to create the lushest possible sound, even bringing upper school Jazz band director Eric Patterson to be a consultant with the sound mixing and editing.

Ultimately, Micky’s goal is to create a recording that can stand alone as a powerful theater experience, or as he says, “make a piece of art that doesn’t have an asterix on it as a Zoom play.” Tasked with the unique challenge of adapting a musical to Zoom, Micky is finding new, creative ways to bring a little color to Lakeside.