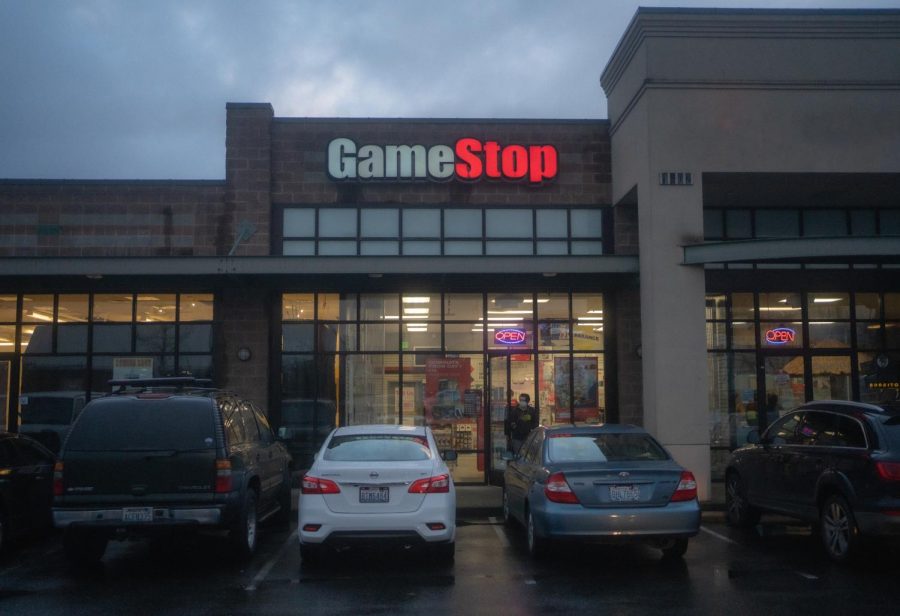 On January 6th, Lakeside senior Hai Dang N. took a risk and invested 10% of his portfolio in GameStop stock (ticker GME). For an amateur investor like him, it was a leap of faith. But, when GME suddenly skyrocketed as part of a collective effort by subreddit r/WallStreetBets, Hai Dang’s risk paid off, making him a success in the midst of one of the stock market’s biggest controversies.

But what actually happened with GameStop stock? For some people, it seems that the world of stock investing just clicks, but for the rest of us, investing means terms we don’t understand, economic situations we can’t quite make sense of, and old guys in suits shouting, “Buy low, sell high!” I know I can’t be the only one who found every article covering GameStop intimidating. So let’s break it down.

Two of the buzzwords from the GameStop fiasco were “hedge fund” and “short sell.” A hedge fund is a group of investors who use complex methods to make money off the stock market. One of these methods is to short stocks. If a hedge fund predicts that a stock will go down, they can borrow a share of the stock, sell it at its current price, and later buy back the borrowed share when the price has dropped for a profit. Keep in mind — and this is the key idea — that they still need to return the shares to their original owner. This is how shorting stocks is supposed to turn out: through the selling and repurchasing of huge numbers of shares, hedge funds make thousands. But in the case of GameStop, things didn’t go to plan.

Late last year, users on r/WallStreetBets, a subreddit dedicated to discussing trading strategy, began to notice that certain hedge funds were short selling huge amounts of GME shares. In fact, these hedge funds were so confident in the value of GME falling that they had shorted more shares than were actually in existence. Hai Dang, who had been following r/WallStreetBets since winter break, remembers seeing a post on January 6: essentially, r/WallStreetBets came to the conclusion that GameStop was actually undervalued, due to the recent hire of exec Ryan Cohen, who they speculated could turn GameStop’s business situation around. Hai Dang did his research and decided to put 10% of his portfolio into GME, citing the faith he had in GameStop.

What ensued was an attempted “short squeeze.” Users on r/WallStreetBets realized that if enough of them purchased shares in GME, they could use the basic principle of supply and demand to drive up the value of the stock and put additional pressure on hedge funds. A week after Hai Dang bought his first shares, their value had doubled. Users like him who had gotten in early made huge amounts of money as the price of GME rocketed from around $18 to $483 on January 28th. As it continued to rise, Hai Dang assessed the situation and continued to buy more shares, eventually putting 100% of his portfolio into GameStop stock. While it was a risky move, by that point, he had made enough profits to cover any losses he might sustain. “Diamond hands, baby!” he asserted, using Reddit lingo to describe his belief in the stock. The raised value took a huge toll on the hedge funds that had shorted GME — when hedge funds sold their shares in GME, they had betted that they could buy them back at a lower price, making a profit when they returned them. Instead, these hedge funds were forced to buy back their shares at a much higher price, costing them billions in asset values.

Here’s where the real controversy comes in. As prices skyrocketed, many brokerages restricted the buying of GME, meaning that investors could only sell GME. When that happened, Hai Dang explained, the share price dropped, and many of the retail investors who bought in late lost money. The fact that so many lost huge sums isn’t what’s causing the controversy — it’s how brokerages restricted the selling of GME. By essentially lowering the value of GME, brokerages defended well-established and wealthy hedge funds against a completely legitimate market trend and left amateur investors in financial chaos. Some investors believe so strongly that the brokerage Robinhood committed illegal market manipulation that they’re filing a class action lawsuit.

I wanted to know what Hai Dang’s opinion on the controversy was. Hai Dang had decided to sell half his shares on January 28 after Elon Musk tweeted about GameStop, knowing that the new media attention could lead to a possible price drop. So while he walks away unscathed and successful, many of his fellow Redditors are left desperately holding on to their GME shares in hopes that it might rise in value from its current place around the $50 mark (as of 2/21). Hai Dang said not only was the brokerages stopping buying ethically wrong, but that many of the hedge funds’ strategies were too. “Hedge funds will artificially deflate the value of a stock for their own benefit,” he explained. “This event exposed a lot of the immoral and illegal actions that hedge funds will take to prevent their losses. Even if that means halting the purchasing of a security.”

Looking at the bigger picture, Hai Dang said that while the stock market can be a financial opportunity for people, many are blocked by educational barriers: “We’re not taught this stuff in school, so unless you’re actively looking out for these kinds of opportunities, they’re not going to come to you.” He explained that for lots of Americans who are living paycheck to paycheck, it’s difficult to save money for an investment account. That said, “I definitely think the stock market has the potential to become a financial equalizer, but I think there need to be changes seen that remove this educational barrier.”

Despite the controversy surrounding GameStop this past month, Hai Dang achieved something major. While he doesn’t want to disclose the amount he made, he shared that it’s a sum that will change him and his family’s life. Looking forward, Hai Dang plans to set aside a portion of the money to support his parents’ restaurant, which has been in financial decline during the pandemic. In terms of investing, he will put 50% of his profits into an exchange-traded fund (a relatively safe investment), and he’ll be a little riskier with the rest,  experimenting with day and swing trading. His advice for Lakesiders? “Distance your emotions from investments.”Hai Dang explained that it’s important not to get caught up in the excitement of the stock market, especially when social media often promotes a fear of missing out that leads to impulsive decisions. Any investor needs to do their own research – and that doesn’t mean watching “investing” TikToks — to make an educated decision. But Hai Dang also humbly acknowledged that part of his success was down to luck. That’s why, he explained, he doesn’t intend to take it for granted, saying, “I could not have imagined this being possible a year ago.”