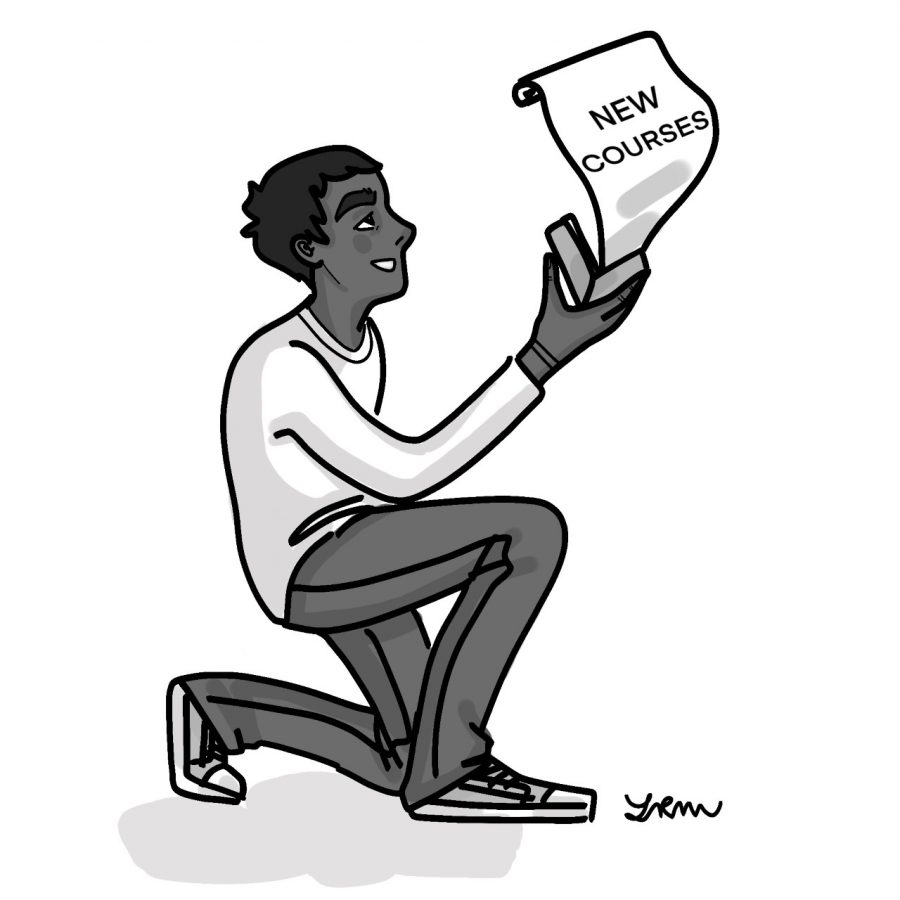 Will you approve me? (Richter-Munger)

Each year, somewhere around five new courses magically appear in Lakeside’s curriculum guide. Lakeside teachers’ commitment to creating a dynamic curriculum is shown with the publication of each new curriculum guide, but few understand the complicated process that brings a course from just a proposal to a full-fledged class with a spot in that PDF. While much of the inner workings remain hidden from students, there is an effort to include the student voice in the process as well as the voices of the administration and department heads. This is achieved through the Curriculum Committee.

The course creation process begins with a teacher creating a course proposal, which is brought up in a Committee meeting by the section’s department head. For example, Blue Planet was created primarily by Ms. Wallace and was brought up at the meeting by the department head, Dr. Parry. The proposal consists of three parts: the general information about the course (length, prerequisites, etc.), a description of the course that will end up in the curriculum guide, and explanations on how the course meets Lakeside’s goals, follows the school’s values, and/or how it fills a gap in the existing curriculum. Over the course of a 45-minute meeting, students and faculty Committee members ask the department head questions about the course and critique parts of the proposal. For some courses, there may be a concern over how many students will independently choose to take it, which is sometimes addressed by adding other incentives. Before the next meeting, the proposal is revised and any feedback is incorporated, and a similar process of critique and questioning happens at the next meeting before the course is approved or rejected. This all happens at a general level, as many of the specifics are determined after the course is approved by and leaves the hands of the Committee. The vast majority of course proposals are approved.

All this might feel somewhat vague, so it’s time to dive into some specifics with the new Science electives – Astronomy (S454) and the Blue Planet (S407). These courses were intended to “offer some classes that would be accessible to a wider range of students,” said Science Department Head Dr. Parry. He notes that most science electives before this year were advanced and mostly limited to juniors and seniors. Sometimes, freshmen and sophomores end up with an extra space in their schedules for science, especially if they took a science course over the summer. Since these new courses don’t have long prerequisite lists, the Course Selection Committee thought they would be able to fill this gap in the curriculum, providing underclassmen with more accessible science electives.

As an aside, the scrupulous student might be wondering why Biology is a prerequisite to Astronomy — are they investigating alien life? As it turns out, the real reason is less about content knowledge. Rather, the science department wants Biology to be the “entry point” to the Lakeside science curriculum. “These electives are not intended to be the very first science experience a student has at Lakeside,” Dr. Parry said.

Despite having similar purposes, the two electives have very different backstories. The Blue Planet is mostly the brainchild of Ms. Wallace, who teaches Honors Chemistry at Lakeside, so it’s unsurprising to know that she drafted the course proposal and will be teaching the course next year.

On the other hand, Astronomy has actually been offered as an elective at Lakeside before. The science department needed to make sure that a teacher with the expertise to teach Astronomy was available before proposing it. They turned to Mx. Martin from the mathematics department, since they had extensive previous experience teaching the course.

The creation of a new course is a complicated process designed to provide courses that students can truly learn something from. As Lakeside’s course catalog undergoes its annual revisions, the Curriculum Selection Committee ensures that students will have an eclectic set of electives to choose from. The constant addition and refinement of courses is a tribute to the thoughtfulness of Lakeside staff. Sure, the vast majority of Lakesiders don’t have direct involvement with the process. But in the end, whether an elective is good or bad boils down to each and every one of us — we, the students, are the ones voting with our course sign-ups.