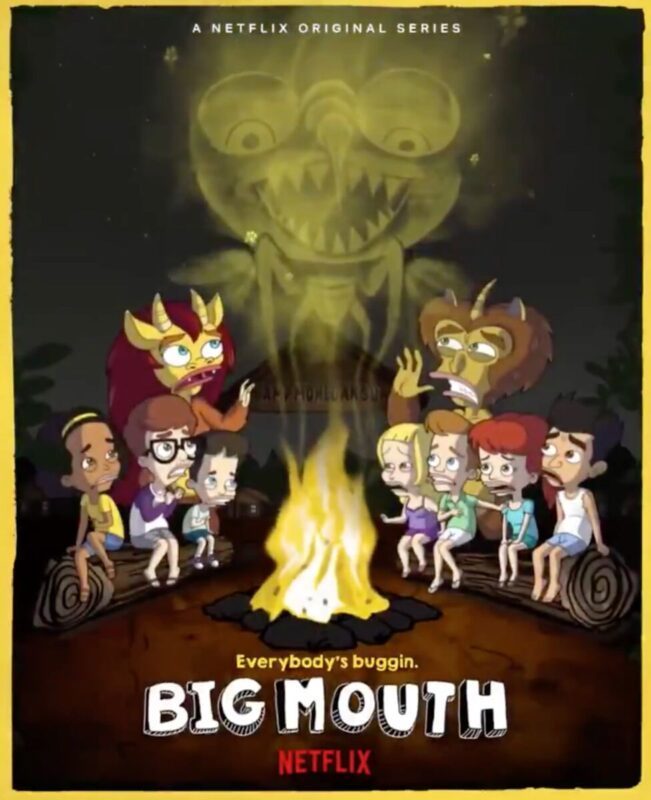 In the growing genre of edgy comedic animated series, sweetness is not the first word that comes to mind. While often clever and intelligent in their own ways, shows like “Rick and Morty,” “South Park,” and “Family Guy,” don’t usually send the most wholesome or kind messages and sometimes feel mean-spirited. Edgy humor often comes at the expense of compassion towards the characters and an episode of “Rick and Morty” often leaves me feeling entertained, but not uplifted.
Walking the line between rauchiness and sensitivity is “Big Mouth,” a hilarious animated series tackling puberty with surprising nuance, compassion, and creativity. The show, loosely based on the experiences of creators Nick Kroll and Andrew Goldberg, follows middle schoolers Nick and Andrew and their group of friends navigating puberty and all the confusion, awkwardness, and self-doubt that comes with it. The kids are influenced and advised by their own hormone monsters, creatures representing every preteen’s hormonal impulses who guide and direct the kids’ decisions, often in questionable ways. While hormone monsters could’ve easily been one-dimensional, flat characters, the monsters instead take on eccentric personalities, backstories, motivations, and lives of their own, which is one of the many delights of the show. The monsters, who can’t be seen by adults, cultivate intimate and endearing relationships with their preteens, almost like Hobbes is to Calvin in “Calvin and Hobbes,” only if Hobbes was far more vulgar and talked much more about sex.
The middle schoolers also become acquainted with other manifestations of pubescent influences, such as Tito the anxiety mosquito, the depression cat, and the shame wizard, who work together to isolate and confuse the kids as they try to make sense of relationships, their sexuality, and who they want to be as adults. By making these emotions and impulses distinct characters, “Big Mouth” humanizes each of the middle schoolers; no one is ever simply gross or mean or lame or dumb, but instead a complex, confused individual trying to understand their rapidly changing body and life.
Season four focuses on the characters’ anxiety and their fears of loneliness, concluding in a surreal battle between gratitude and anxiety inside Nick’s subconsciousness represented by a massive toad beating up a mosquito. Creative and hilarious touches like these elevate “Big Mouth” from a goofy cartoon about gross preteens to one of the more complex and unique shows that I’ve seen. Through the show’s endless creativity, messages that could come off as preachy or contrived in a cartoon, like sexuality, body inclusivity, and hyper-masculinity, are instead some of the most entertaining parts of the series. Whether it’s through a musical number sang by a massive tampon about how having one’s period is nothing to be ashamed of or a sex-ed-themed Star Trek spinoff, “Big Mouth” has a remarkable ability to make uncomfortable subjects more accessible and more entertaining, albeit in an often graphic manner, as it doesn’t shy away from any of the gross intricacies of puberty.
However, as is often the case when making a comedy show about sensitive topics, “Big Mouth” has been criticized for insensitivity and inaccuracy. In an episode where a new student comes out as pansexual to her classmates, the new student creates a metaphor to describe pansexuality: “It’s, like, some of you borings like tacos, and some of you like burritos. And if you’re bisexual, you like tacos and burritos… But I’m saying I like tacos and burritos, and I could be into a taco that was born a burrito, sure, ’kay, or a burrito that is transitioning into a taco.” While well intentioned, this description of pansexuality was offensive to the non-binary and transgender community by implying that gender was binary and that a transgender man or woman isn’t actually a man or a woman.
Instead of responding by bashing political correctness or oversensitivity—like many other comedians have done when criticized for being offensive—creator Andrew Goldberg offered a sincere and thoughtful apology, in which he reflected on what the show had done wrong and thanked the critics for “opening [the writers’] eyes.” While the show is filled with its share of edgy, graphic, and explicit jokes, the jokes rarely are insensitive or cruel, never breaching the show’s central value: inclusivity. With an exceedingly diverse cast of characters, “Big Mouth” makes an effort to portray puberty for anyone, whether they’re black, white, biracial, gay, straight, or transgender. In “Big Mouth,” edgy jokes aren’t simply to test the boundaries; rather, they make the characters more sympathetic and relatable. No matter who we are, “Big Mouth” knows that everyone has their inner hormone monster.