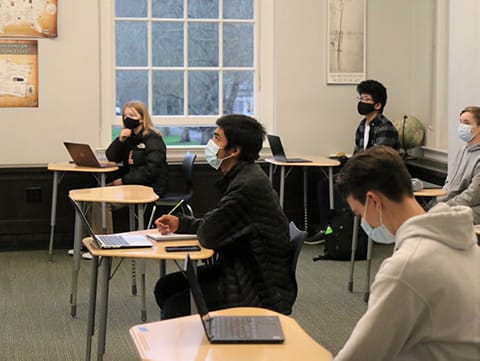 On Monday, January 11, the first batch of students arrived at the Upper School campus for the first entire week of in-person learning this year. But for students of each learning style, the experience of the other in the new hybrid setting may be a mystery. How different was a day in hybrid versus one spent remote? Did hybrid live up to our expectations?

From a social standpoint, it is a lot easier to converse with people in person, even with masks and social distancing measures in place. Michael L. ’24, who attended school in person, says, “You can see and talk to other people when going to different classes and connect with more people more often.” Even the students still attending school remotely felt the change: “Hybrid brings with it a spirit of active participation along with a refreshing dose of normalcy,” says Michael Y. ’24. “While I haven’t had enough experience in the hybrid system to express a definitive opinion, I believe that hybrid has a much higher ceiling than remote learning both in what is learned and in the social aspects of school.”

Another thing to consider is the safety precautions of hybrid learning. In classes, social distancing is strict, but in hallways, it can be more lax. “Sometimes walking with the six feet rule is a little hard to follow,” says Michael L., “because of the number of people going in the same direction and walking near you, as well as you want to talk to people, so it can be hard to hear each other.” Lunch, it seems, is distanced well, with students not allowed to talk unless their masks are on. Because of that rule, Mouhamed T. ’24 says that “socially, it’s a lot harder to talk and make friends, and it makes the lunchroom a lot more silent.”

Additionally, academics have been impacted. With the time taken to sanitize classrooms, classes have become shorter than usual during hybrid, and some time has been used on technological issues. There’s a give and take here, too. Remote learning, for all its disconnect and disadvantages, was surprisingly convenient sometimes. “For purely selfish reasons, I enjoy the flexibility in time management and degree of synchronous learning in a remote setting. This type of independence-preserving cohesiveness is what I think makes up one of the largest upsides to remote learning,” says Michael Y. That being said, once hybrid started, “the depth to which we discussed the material was almost instantly elevated due to the easier communication of (some) in-person learning.” Though remote learning is more flexible, hybrid has more enthusiasm and spirit to it, which makes learning a lot easier, though it’s still a bit bumpy.

There’s also been somewhat of a gap between in-person kids and remote kids. In some classes, people staying remote and people staying in-person have a hard time hearing each other and end up yelling into the camera in the corner. With the barrier of the screen, small-group discussions usually end up with remote kids and in-person kids separated into different groups simply because there’s so much background noise if they work together. “Personally, this division feels like the largest downside of hybrid learning so far,” says Michael Y. “Besides the technical difficulties of communication between the two groups, learning at school and learning at home are two things so intrinsically different that it’s quite hard to integrate them into one classroom setting.” Yet because of it, there’s also the opportunity to meet new people inside the groups, and it may be easier to do so in substantially smaller groups. Though it forms a little bit of a divide, it also helps people get to know each other more within the groups.

Even with the disadvantages of hybrid learning, it seems that it also has a lot to look forward to, and as we work out the kinks, it may get better over time. If students continue to follow the safety regulations, hybrid learning could continue to progress to a semi-normal school day. Here’s to hybrid!