The End of an Era: Mr. Noe Announces Retirement 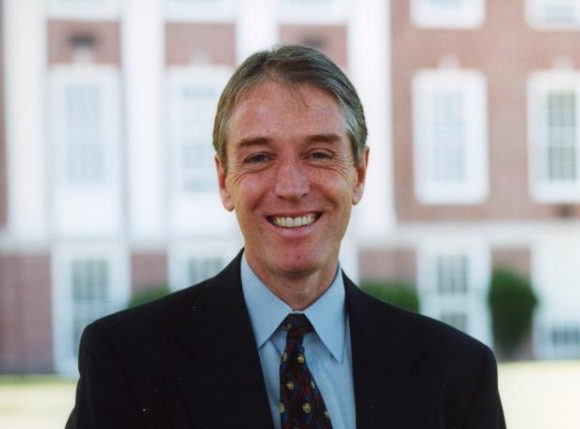 “Wow Mr Noe is leaving,” texted a friend on a group chat on January 5. Seconds later, replies of “woahhhh, bernie out,” “What?!” and “berndog [sad emoji]…” popped up. Conversation in the chat quickly turned to comments of fond appreciation and then speculation about our Head of School’s next move (“hes [sic] probably retiring so he can run for president,” wrote one member). Someone even sent a screenshot of something she’d said on Discord a month ago that had predicted Mr. Noe’s retirement. Discussion eventually moved on to whether popstar Pitbull would be our next head of school (I can’t explain that jump), but for a solid hour and a half, news of Mr. Noe’s retirement had captured the attention of one of the junior grade’s most hyperactive group chats.

The announcement came in typical Mr. Noe fashion: serious and reflective, and yet also low-key, with a simple anecdote to get us in the mood. As he expressed gratitude for his community members and walked us through his time as a father of two Lakeside students, Mr. Noe’s email carried the signature reflections and commentary on life that we’ve all come to expect. He was clear, though, that he is in no way leaving us in this year of disaster, saying, “There is much to do in the next 18 months.”

If I’ve done my math correctly, the 2020-21 school year will be Mr. Noe’s 21st year as Head of Lakeside School. To the current student body, 21 years is at least three years longer than how long we’ve been alive, and for me at least, it’s a length of time I struggle to wrap my head around. A post on Lakeside’s Facebook shows a grinning late-1990s Mr. Noe and reads, “In his time at Lakeside, the school has implemented a Mission Focus, created and developed a number of global programs including the Global Service Learning trips, begun and developed Summer School Programs, launched the Global Online Academy, renovated two of the main academic buildings on campus, and much more.” What the post doesn’t mention is what Mr. Noe considers his biggest accomplishment: the huge move towards diversity that the school has seen over the last two decades. In a Zoom interview, Mr. Noe explained to me what his first three years at Lakeside were like: “The school was in complete transition… [it] was a very complicated and challenging period.” These three years included a complete overhaul of the school’s euro-centric curriculum in order to become more global, a change to laptops, and a shocking 50% faculty turnover. Of those first few years, Mr. Noe even joked, “I thought for sure I was going to get fired. I thought… ‘Yeah, well, this won’t last long.’” But he steered the Lakeside community through choppy waters, and since then, the school has taken a completely new approach to global learning and diversity, with students of color now making up 65% of the student body instead of under a quarter.

The second great challenge of Mr. Noe’s career at Lakeside has been, unsurprisingly, navigating the COVID-19 pandemic. Each one of us has had to digest and navigate the challenges, frustrations and adversity that the past year has brought. But, we’ve also all seen the results of Mr. Noe’s leadership: an entirely remote system of teaching that was practically set up overnight, an efficient and informed medical team making real-time decisions, and now, in-person school.

Even now, with a year and a half left until his bittersweet departure, Mr. Noe still has big plans. “I’ve always believed in finishing well,” he explained; “I know what I want to focus on.” Despite the incredible change that Lakeside has seen during Mr. Noe’s time from euro-centric to global school, he’s still working for better diversity, saying that “the culture hasn’t shifted enough to reflect how diverse a student body we are”; part of his goal in his final year will be to pass that torch onto his successor. Another task ahead is continuing the transition to the skills, mindsets, and competencies, as well as raising money for the school. Finally, Mr. Noe wants to have fun and enjoy the daily Lakeside routine and environment—that is, in short, what he’ll miss most about Lakeside. Mr. Noe explained to me how, for him, Lakeside really is all about the people. Whether it’s chatting with students in Red Square before first period or working with faculty and administrators during meetings, he’s going to miss “just being around.” Mr. Noe explained how leading youth biking trips was what originally made him want to get into education, and looking back, he remembers how fun and hysterical the kids were. He saw that same overwhelming joy last week when students returned to campus, concluding that “the students are the best part of the job.” That, and Grandparents Day, he added, joking that the Lakeside grandparents who once looked so old to him are now his age.

It’s no surprise that Mr. Noe is a workaholic. Not only does he put in 80 hours of work a week, he lives on campus (he did mention though, that once he leaves, he plans to move to Greenlake, his happy place, right away) and even described Lakeside as his “lifestyle.” While he may be planning to step away from Lakeside, Mr. Noe has no intention of living the typical golf-filled retirement life, planning instead to continue working with independent schools, especially as they begin to do their own versions of “re-envisioning.” More importantly, Mr. Noe shared with me how he wants to be present for his family, especially for his newborn granddaughter (soon to be joined by a grandson!).

A year and a half might feel like a long time, but before we know it, a new Head of School will be welcoming us back from the summer break in a Convocation speech. Those of you on Mr. Noe’s advisory committees will be sharing your insights with a different face. “Noe News is Good News” will be replaced with another, likely less witty title. When I asked Mr. Noe a closing question about what he wants to see in his successor, he simply said, “I just hope they find someone who loves what Lakeside is all about.” A fitting description, as I think that’s exactly how each of us would describe Mr. Noe.