“The Prom”: Homophobia With a Touch of Zazz 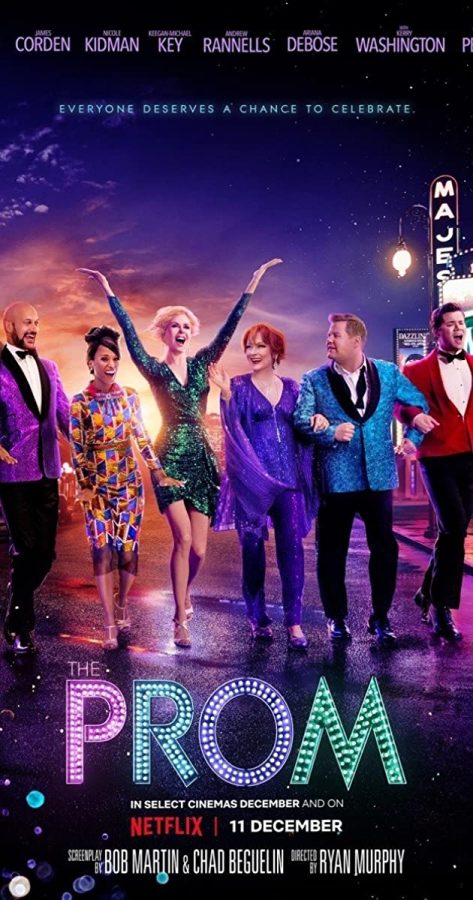 The latest installment in the Ryan Murphy Cinematic Universe is here, and this time, it’s a movie musical. “The Prom,” based on the Broadway musical of the same name, follows a lesbian teen couple and a few opportunist Broadway actors as they fight to allow the couple to attend their high school’s prom together in the face of a homophobic PTA (the president of which, by the way, is the mother of one of the girls). It has plenty of glitter, mostly good singing, and quite the star-studded cast. What could go wrong? Despite having the bones for a truly great movie musical, “The Prom” has some glaring issues that no amount of zazz can cover up. “The Prom” is the feel good LGBTQ movie of the season — if you feel good about two hours of homophobia.

Let’s start with a short rundown of the dramatis personae and main plot. We’ve got Emma Nolan (Jo Ellen Pellman) and Alyssa Greene (Ariana DeBose), the (supposedly) main couple of the film. They’ve been dating for a year and a half, but Alyssa’s homophobic mom (Kerry Washington) has no idea. Also, Emma was kicked out when she came out to her parents and is now living with her grandmother. (This trauma is barely dealt with.) Emma wants to take Alyssa to the prom, but when Alyssa’s mom finds out, she cancels the prom entirely. This event garners national attention and piques the interest of Dee Dee Allen (Meryl Streep) and Barry Glickman (James Corden), the two stars of a critically panned musical about Eleanor Roosevelt. Barry is effeminate and narcissistic, and Dee Dee is your classic Broadway diva, evoking equal parts Moira Rose and Patti Lupone (who, surprisingly, isn’t in this movie). Their show closes on opening night, and they drown their sorrows at Sardi’s with the company of Trent Oliver (Andrew Rannells), a *Juilliard graduate* between gigs, and Angie Dickinson (Nicole Kidman), an intoxicated member of the “Chicago” chorus. Searching for a way to save Dee Dee and Barry’s reputations, the actors take Trent’s non-union tour bus to Indiana in search of Emma to try and help her. Hilarity and homophobia ensue.

Before we get to the bad, of which there is plenty, we’d like to acknowledge the good parts of this film. Firstly, the production value is excellent. The dancing is also excellent. They did a fairly good job of casting actors who can actually sing (Jo Ellen Pellman studied musical theatre, Andrew Rannells and Ariana DeBose are bonafide Broadway stars, and Meryl Streep is Meryl Streep), but having such strong singers makes the gap between them and the Nicole Kidmans of the cast very apparent. Nevertheless, the songs are catchy and sung well.

There were some good, even great performances among the cast. Kerry Washington’s performance as Mrs. Greene was an unexpected favorite, not because her character was likable, but because she played the role of a neurotic mother perfectly. As well, Andrew Rannells’ big song, “Love Thy Neighbor,” was a fun number with witty lyricism. It made several strong points about cherry-picking the Bible, and suggested that a worthy opponent to “praying the gay away” just might be “singing the homophobia away.” Meryl Streep was just doing her thing, killing it as usual. Her casting made perfect sense and she proved yet again that at the age of 71, she’s still got it. Keegan-Michael Key, though decidedly not a movie musical staple in the way some others in the cast are, brought a lot of heart to his character as a high school principal and Emma’s fierce advocate.

This cast was not without its issues, though, the primary issue being James Corden. To call James Corden’s performance as Barry Glickman an affront is putting it nicely. Barry Glickman is a great character with a rich backstory, but he needed to be played by a gay man. Actors don’t need to always have the same sexuality as the characters they play, but the over-the-top campiness and affectation Corden put on was uncomfortable, to say the least. So much of Barry’s character is focused on his experience as a gay man, and many of his scenes would be incredibly heartwarming if the actor playing him had any real stake in that experience. Instead, we got James Corden’s performance, which felt extremely fake and borderline offensive. If you’re going to show us a story in which a character struggles deeply with homophobia and being accepted, at the very least cast a gay actor.

In this movie, Emma Nolan is the human embodiment of the “:D” emoticon. Even as she laments how anxious she is, or how hard it is to be gay in Indiana, she does it with a giant smile on her face. Her facial expression barely changes throughout the movie, despite the fact that she goes through A LOT as the story progresses: She gets repeatedly bullied, breaks up with her girlfriend, and finds out that the adults helping her decided to do so out of their own self-interest. Instead of showing us how Emma deals with how terribly her classmates treat her, her introductory song feels like a smiley day in the life, in which we see her go to swim practice (“terrible technique,” Lauren adds) and move through her day at school like everything’s totally fine. Mere minutes after she (very casually) breaks up with Alyssa, she’s sporting a big grin. We don’t see Emma nor Alyssa distraught over the breakup, despite them having dated for over a year. In fact, their relationship, supposedly the central driver of the film, is mostly glossed over. We don’t see them kiss until the last five minutes, they have about seven minutes total of screen time together, and their chemistry evokes nothing more than two best friends, if even that. There was more homoerotic subtext between the homophobic bullies than the central lesbian couple.

One of the film’s biggest structural issues is its balance: Why do we focus so much on Dee Dee and Barry when we could learn more about Emma and Alyssa’s relationship? Or Alyssa’s complicated relationship with her mother? Alyssa’s big vulnerable number, “Alyssa Greene,” is watered down by excessive production that turns it into a pop song and another fun montage of her various extracurriculars. In the song, Alyssa finally reveals how she feels about the pressure her mom puts on her, but because this mother-daughter relationship is barely set up in the movie, the moment makes little sense to the audience. The adults are developed fully at the expense of the romantic heart of the film: We get a fully fleshed-out backstory for Barry, complete with flashback scenes to his own prom and a mother-son reunion. It’s cute, but in a two-hour movie, you’d expect more interactions between the MAIN COUPLE. Emma and Alyssa don’t so much as hold hands before we learn about Dee Dee’s relationship with her offscreen ex-husband. It would have been so interesting to learn more about Emma and Alyssa: What are they like as a couple? How did they start dating? What is the dynamic of their relationship around people they aren’t out to? None of these questions are answered. To say that this movie did their main couple dirty is an understatement.

“The Prom” would have been a great opportunity to make social commentary about the relationship between middle America and coastal “elites.” It could have shown that not everyone is true to a regional stereotype and how wrong preconceived notions can be. There are some moments that could have been such good commentary, like when Dee Dee didn’t know what an Applebees was or when the monster truck show crowd booed the Broadway performers. However, the film isn’t self-aware enough in this regard to make an effective statement.

If you’re looking for high art, “The Prom” is not it. It’s a fun watch for the most part… if you can get over James Corden. It’s worth it for the songs and dancing, and is generally fun to watch if you don’t think about it too hard. It’s entertainment with plenty of glitter and bright colors, and in these wretched, miserable times, maybe that’s all that matters.