From Loners to Joiners 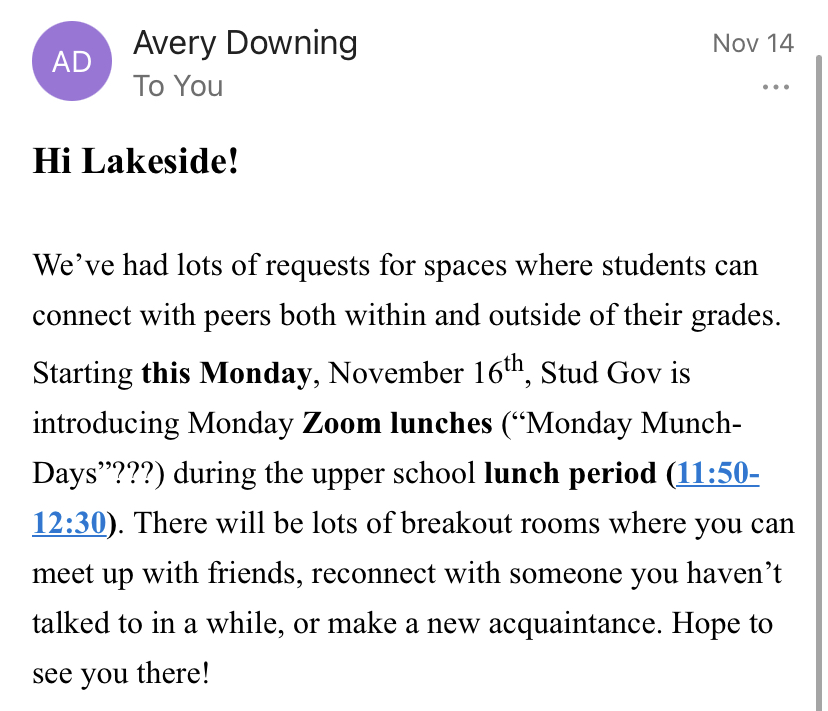 “Why did high school fly by so quickly? I feel like I was just getting to the good part when the pandemic came in and slapped me about the face. I seriously do not feel like a senior… People are getting into college and it’s hit me that probably the last meaningful time I spent with my classmates has already happened. I could very well never have a conversation with a lot of my class ever again.” – Tatler Poll Respondent #87

They say quarantine teaches you who your real friends are. Without a daily “hi” in the halls to bolster a relationship, our circle of people with whom we communicate regularly has dwindled.

To meet new people and connect with our classmates, we threw ourselves into the Student-Government-organized “fun bonding events.” In the spirit of social interaction, we first decided to join the Monday Zoom lunch meetings.

NHIVAN: I should probably mention that I am not good at small talk, so when I joined the first week and was the first to arrive besides the teacher, it was a bit nerve-wracking to say the least. But then Anya arrived, and we all went into the same room as the freshman, where we acted as moderators of their discussion.

The second week, we joined the freshman in their room and played Among Us. This was my first time playing and I was the Imposter. After flailing around for a bit, I picked up how to play and won by beginner’s luck alone. It was fun to get to spend time without any awkward pauses or silences.

ANYA: Those Zoom meetings were quite scary. Like NhiVan, I could feel my heart racing as I clicked “join meeting,” unsure if I would see any of my senior friends there. For the most part, I didn’t. (During the second meeting, I panic-texted my friends to join me after Ms. Erickson — clearly wary of crushing my dreams to be a social butterfly — told me that there were no other twelfth graders present.)

However, as NhiVan mentioned, I did spend some time with the freshmen! We spent a meeting debating the merits of Chick-Fil-A. Although… will they remember who I am if we go back to school? Probably not.

After two weeks, we had exhausted the Monday Zoom lunches. Instead, we chose to participate in the Pen Pal activity.

ANYA: As I’m writing this, I realize that I have not filled out the last Pen Pal prompt. However, that’s okay, because I figured out who my Pen Pal was after the first letter! NhiVan and I got each other.

NHIVAN: It was almost instantly clear that Anya was my partner, but I was a bit afraid to ask her right away. I didn’t want to ruin our social experiment! But once I knew it was her, it was a lot easier to be more open and honest in the letters. I also forgot to fill out the last letter, but overall, I did learn new things despite not meeting someone new.

ANYA: That being said, I can’t say the Pen Pal activity was an absolute success. I didn’t connect with a new classmate (though I of course valued the opportunity to learn more about an old friend). I admit I had a vision of a new relationship forged through emotional, soul-baring letter-writing. Unfortunately, my dream did not turn into reality.

What have we learned from this experience?

ANYA: I now have a new perspective on fast food restaurants, as well as the Stud Gov podcast, which I listened to as research for this article (I have SO many thoughts about the podcast. Stud Gov, please talk to me).

NHIVAN: I enjoyed hearing about Lakeside from the freshman when they’re still new and haven’t been on campus yet. Chatting with people I’ve never met wasn’t as scary or as awkward as I thought it would be, and I got to spend more time with Anya!  It takes a bit of effort to get over the initial hurdle of actually logging on to Zoom and joining another call, but it’s a great way to talk about topics unrelated to school and to meet new people, even if it is only fleeting.

ANYA: Personally, I think my lack of social interaction during these activities was a sign from the universe. The world is telling me that it’s okay to be a wallflower. And that — although it’s a bittersweet idea — I shouldn’t go looking for new friends during my senior year but be more appreciative of the ones I already have.

“In the blink of an eye, everyone will be going their separate ways and all we’ll really have to remember is how we spent what’s supposed to be the best parts of high school online. It’s starting to feel like we will have left one day and never came back.” – Tatler Poll Respondent #87