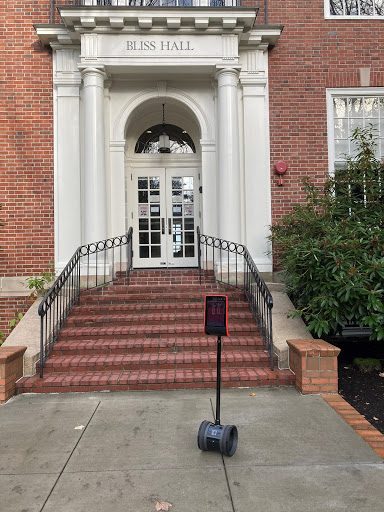 Imagine walking across Red Square and opening the doors to Bliss Hall, only to find yourself face-to-face with a robot. It stands five feet tall, with a rectangular face showing a video feed of a staff member or a greeting message. The robot balances delicately atop a single pole as it steadily swivels around to face you. After exchanging a greeting, it backs up and rolls down the hall, pausing on its way to check the rows of mailboxes lining the hallway before entering a classroom.

This might seem like the opening of a sci-fi novel, but it is already a reality. Lakeside has recently purchased two Double 3 robots from the startup company Double Robotics as an addition to campus.

Jamie Britto, director of technology, described how the idea of robots initially arose during the pandemic. Since some teachers or staff members in high-risk groups might be unable to return to campus, the Technology department was planning to offer a telepresence solution. Their goal was to connect faculty or staff working from home with students and colleagues on campus. This would not only enhance the presence of remote staff members but also augment the experience of everyone interacting with them. One particular case could be bringing teachers closer to their students in a more engaging classroom setting.

In addition to altering classroom settings, the introduction of the robot aims to help maintain a more natural sense of community during hybrid learning. Mr. Britto recounted how Ms. Wilson, Lakeside’s director of admissions, used the robot to simulate a face-to-face conversation with Head of School Mr. Noe. She remotely controlled the robot, driving it through the door to say hi before continuing her “walk.” The experience was just like Ms. Wilson physically walking in, only through the Double 3 as a medium. “They were able to have a regular conversation,” Mr. Britto commented, adding that “they didn’t even need to wear masks, so it was much more natural.”

Among various robot models that the technology team tested, the Double 3 emerged as the favorite for its ability to move around, its intuitive user interface, and its success in making people “feel there.” The Tech Department also collaborated with teachers to explore a stationary model using Microsoft Teams and a tablet.

On a Friday morning, I had the good fortune to test out the Double 3 myself at the Upper School. It took a simple login to access the robot; after connecting, I immediately saw the video feed from the robot’s camera. Once the lighting adjusted, it revealed the interior of an empty classroom in Bliss Hall with Mr. Uy, technology administrative assistant, standing next to a few chairs and desks. But the carpet appeared with a grid of dots that the robot used for navigation and obstacle avoidance. This virtual grid did not extend onto the desks or walls, indicating that the robot could tell what was the floor and what was not.

After greeting me, Mr. Uy gave a minute-long crash course in driving the robot. The user interface was amazingly simple and straightforward, resembling Google Earth Street View, only with completely realistic graphics. I undocked from the charging station as Mr. Uy explained how the robot could be driven via the arrow keys on my keyboard. At the same time, there was also a pathfinding method, where I could click the dots on the virtual grid to specify my intended destination.

This pathfinding was impressively intelligent. When Mr. Uy purposely placed a chair in the Double 3’s path, I could see the robot stop and look around, searching for a way around this newly-placed confounded obstacle. After several seconds, it rotated on its two-wheeled base, driving in an arc as if making a sidestep, and successfully rolled around the chair. Very clever, indeed.

The Double 3 brought me out of the classroom and we went down the hall. I ran into a wall and recovered unscathed in an unintentional test of the Double 3’s balancing skills. Backing away from the wall was a bit of a nuisance, though. From there, we proceeded out of one of Bliss’ back doors—Mr. Uy had to open it for me, of course—and up the wheelchair ramp. I was able to take the sidewalk but had to avoid the grass. This let me circle around Bliss and strike a nice photo pose in front of the building. However, the farther away I strayed from Bliss Hall, the worse my connection became; I eventually went “unconscious” in the middle of Red Square, and Mr. Uy had to carry “me” inside before I recovered.

The Double 3 has numerous advanced features and functions, all of which were remarkably easy for me to use and get familiarized with. On the technical driving side, its sensors provide the driver with an obstacle detection field. “I think there are five or six sensors on the bottom of this thing,” Mr. Uy explained, adding that “if you get too close to something, you’ll see this big red wall from the obstacle detector, and you know you should probably stop.” This is all the more helpful because users cannot see low-lying obstacles on the floor from the robot’s main video feed, such as strewn backpacks, textbooks, and other tripping hazards.

If you happen to be a fan of Asimov’s science-fiction, you are probably familiar with his three laws of robotics: do not harm humans, obey orders, and self-protect. The less-intelligent Double 3 follows these three laws in reverse order. Its self-preservation instincts override user commands, which, for instance, occurred when Mr. Noe performed an interesting test of the Double 3: intentionally trying to drive the robot down the stairs. You might guess that it would topple over and crash at the bottom. However, its self-preservation instincts prevailed over Mr. Noe’s orders, and the robot slowed to a stop as it reached the edge of the stairwell, refusing to continue.

I think the Double 3’s most impressive feature is its augmented reality functions. Besides the grid of dots showing the floor, the Double 3’s docking and recharging feature is noteworthy. As mentioned before, drivers cannot see low-lying objects on the floor. However, the Double 3’s charging dock itself is such an object. To solve this problem, the AR video feed cleverly adds a giant rotating orange symbol above the charging dock. By clicking on the orange symbol, drivers can command the robot to automatically navigate to the dock, roll into it, and charge itself, much like how hungry students instinctively head to the WCC.

Because of connection issues between buildings, the robots are largely incapable of moving from building to building. Mr. Britto says that Lakeside can consider purchasing a few more robots so that telepresence teaching can be more convenient throughout all campus buildings.

The Double 3 will be here to stay even after the pandemic is over. It will have many prospective usages besides teachers and staff working from home: perhaps students studying abroad or recovering from a sports injury at home could use the robot to take classes in person, a far better experience compared to merely reading notes on PowerSchool and finishing make-up work.

In this new century of Lakeside’s existence, technological advancements such as self-driving cars and delivery drones are about to take the world by storm. Robotics is at the forefront of innovation, and will soon become an integral part of our everyday lives, especially in our education. Returning to campus, you might see the Double 3 rolling through the cafeteria or teaching in Allen-Gates. The robots have already arrived at Lakeside. Ready or not, here they come.