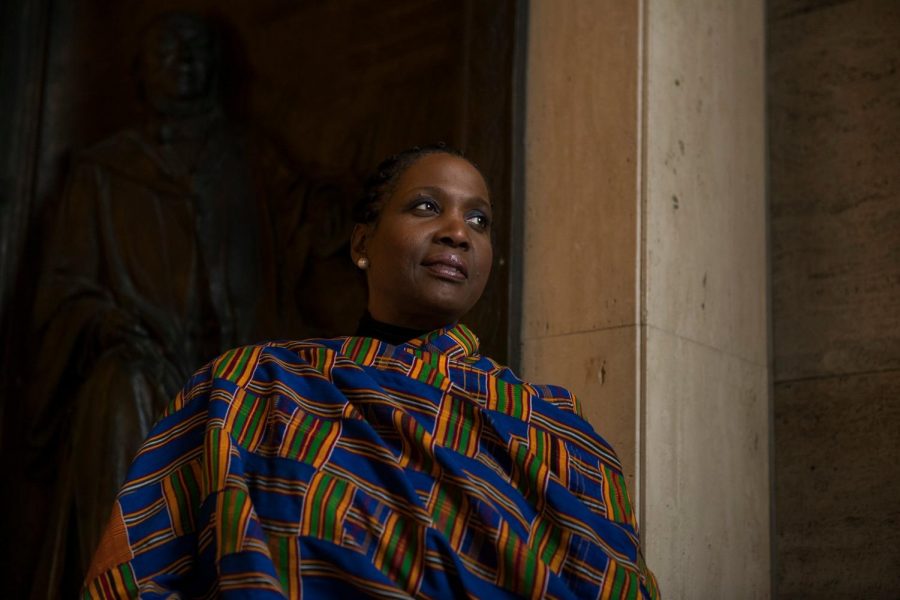 On December 17, after speaking at assembly, Dr. Lisa D. Cook met with Aaron Z. ’23 for an interview on economics and racial and gender equity.

Q: What does your work focus on?

A: My work focuses on macroeconomics: looking at the effect of the rule of law and property rights on economic growth. The first way I looked at that was through the question of “How can we protect the way the market works through the banking system?” And then I started looking at patents, intellectual property, and the rule of law. I continued to look at macroeconomics through that lens, through violence, gender and racial gaps in innovation, and other impediments to innovation.

A: These puzzles that came up while living in a developing country. I encourage all of my students to study abroad because you have one model of the way to do things, to solve puzzles, by being in a particular environment. But when you’re taken out of that environment, you don’t have the same constraints of the questions you ask and the way you ask them. In Russia or in Africa, I was just opened up to a whole different set of questions that went to the fundamentals of economics. That’s what motivated me to pursue this subject — I’m always trying to figure out the puzzle and see how figuring out the puzzle could enhance peoples’ lives.

Q: How does economics relate to racial equity?

A: In every way. I’m going to take one example, because I spoke about it during assembly — the allocation of credit. One thing we know about large financial institutions: they have a history of discriminating against racial and ethnic minorities. So when the PPP program to help small businesses was rolled out, because it went through the major banks, business owners who were from underrepresented racial and ethnic minorities could not get access to this credit, or they got much less than they needed. And they were already in dire straits. So it affects every single part of economics, whether we’re talking about the market for credit, the labor market, or the market for healthcare. And I would argue that the pandemic has highlighted how every single aspect of society and the economy have a racial component.

Q: Key topics in this recent election have included unemployment, racial wealth gaps, and immigration; in addition, various movements against inequities have been brought to the spotlight. With the pandemic, what can economic and cultural history tell us about the moment we are in?

A: History is always instructive. Because if you don’t know your history, you’re destined to repeat it. The Tuskegee Experiment is something that is deeply embedded in the American public’s mind, and especially in that of African Americans. They weren’t told that they had syphilis, and there was a cure for it. And they were observed to see how this disease evolved. It was inhumane. Because of that, we know from many papers that have been written about this, Black men don’t go to the doctor. So I think it’s no mystery that Black men are dying like flies in this pandemic, and it’s just tragic. Having a vaccine is fantastic, but our history can be a barrier to people adopting vaccines and other health interventions that could be better for everybody. And we have to face that history. We have to have more public engagement to be able to convince all people to take the vaccine. The testing and retesting and rollout are always going to be difficult, but they’ll be doubly difficult if you have this history of racialized engagement with the healthcare system.

Q: From your work in addressing racial and gender inequities in economics, how does diversity affect innovation?

A: A common statistic than my coauthor Yanyan Yang and I came up with was that if more African Americans and women — those were the groups I was studying; I think this is true in general about underrepresented minorities — participated more in the innovation process, especially at the beginning, we would have 0.6% higher GDP per capita to 4.4% higher GDP per capita. And the corollary of that, something I understood before I calculated this statistic, was that mixed-gender patent teams are more productive than single-sex patent teams. To me, that’s the most compelling argument for diversity: you are taking away the barriers to participation so that ideas can freely be exchanged. I think it’s important for innovation in the U.S., and I think that’s imperative for innovation around the world; you have to break down the barriers.

Q: What advice would you have for students interested in entrepreneurship or economics? How can they pursue economics in an equitable way?

A: There are many opportunities: interning with, say, a company that does economic analysis, that studies interesting things like energy or the environment. It might be in business school, so it might have a practical application. There are many ways to study this, and Silicon Valley, the tech firms, are some of the biggest employers of PhD economists these days. A lot of our students are going to Amazon, to Google. Our skills are in demand.