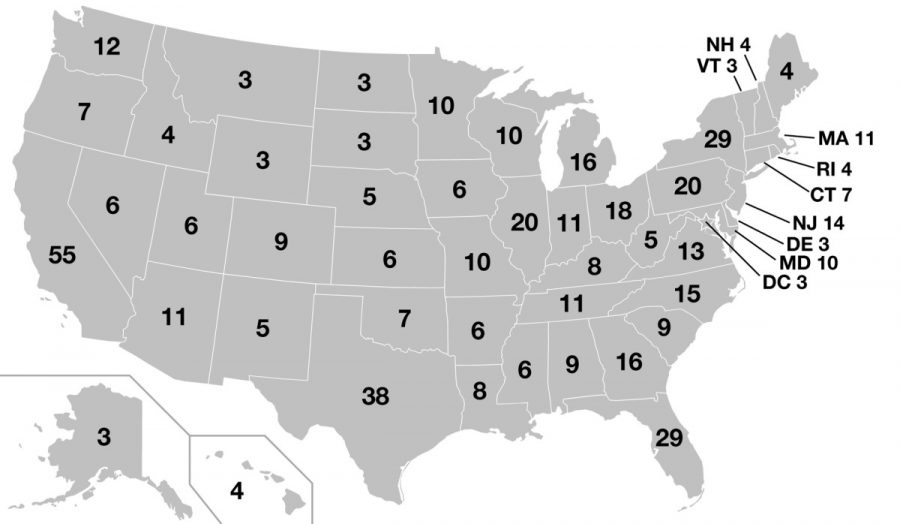 Following the 2020 election that saw Vice-President Joe Biden win an estimated 306 electoral votes to President Donal Trump’s 236 (that is wrong), we asked three students in Lakeside’s Math of Democracy Elective: Do You Think The Electoral College is an Effective System in 2020 America?

This past weekend, I did a reading for Mathematics of Democracy on this very subject. In Federalist 68, Alexander Hamilton discussed the use of the Electoral College as a means to prevent demagogues from taking advantage of misinformed voters and seizing power. In my opinion, exactly that has happened under the Electoral College. It’s not a stretch to say that Donald Trump swindles Americans. From leaving his own base out in the cold during a rally to repeatedly lying about the election results (and those are just examples from the past few months), Trump has taken advantage of people’s willingness to hear what he says to further his own agenda. He appeals to the prejudices of white supremacist groups, emboldening them to be stronger in their hate, and his win in 2016 is exactly the situation the Electoral College was meant to prevent. Though Trump is an extreme example of why the Electoral College is no longer effective, there are plenty of non-Trump reasons to end the Electoral College. It has, on multiple occasions, allowed the popular-vote-losing-candidate to win the presidency. In the 2020 election, it became clear very quickly that Joe Biden would win the popular vote, yet there was uncertainty days after the election about who would win what states. This kind of uncertainty exposes the issues with the discrepancy between winners of the Electoral College and the popular vote. In addition, the Electoral College disproportionately represents rural states. While it is important that the interests of rural Americans are represented, how is it fair that a person’s vote matters less or more based on where they live? If elections were decided with a national plurality vote, each person’s vote would count equally. While the Electoral College might have been a good system for the 18th century, it is not optimal for modern elections.

I think we should keep the Electoral College. While I can concede that it isn’t a perfect system, it is in my opinion without a doubt the best system for a presidential election that our country can have. One of the biggest criticisms of the EC is the ability for a candidate to win the presidency without winning the popular vote. However, that has only happened 5 times and before the 2000 election it hadn’t occurred since 1888. Like I said, not a perfect system but these occurrences are pretty rare in actuality. While this may not appear to be a pure democratic system of election, well it’s not supposed to be. The US has never been nor has ever been intended to be a direct democracy. It has always been a constitutional republic where there is an emphasis on the states. And so for the US to function, the states must have their intended powers and representation. The EC best fits this need for state representation because of its equalizing of representation on a state by state basis. Regardless of if it’s a red state like Wyoming, or a blue one like Vermont.

Yet people still vote, and I believe that this is because the electoral college makes the process fun, supplementing finicky altruistic voting justifications with pure entertainment. We enjoy playing parts in grand narratives, and the geographical nature of the Electoral College allows us to do so. The Rust Belt, The Sun Belt, the blue wall, swing states: it is the fighting over swathes of the country that we call home, geographical area more visceral than numbers that makes people proud to vote. The red/blue map is not simply a convenient metric through which we learn about the election: it is the only way we see the electoral process, a fight for the nation’s soul embodied in the nation’s land. The medium is the message, and the message is to vote.

The geographical representation, in combination with the irregular distribution of electoral votes, gamifies the electoral college: it is fun to watch and play. In contrast, under a popular vote system, voting would become much more abstract. There would be no map, no big surprises as states flipped, and no variable reward mechanisms. There would be a single bar, tens of millions of Americans directly opposing one another. People would choose not to play; voting would lose its appeal.