A Different Kind of Climate Change: The Political Climate in America and at Lakeside 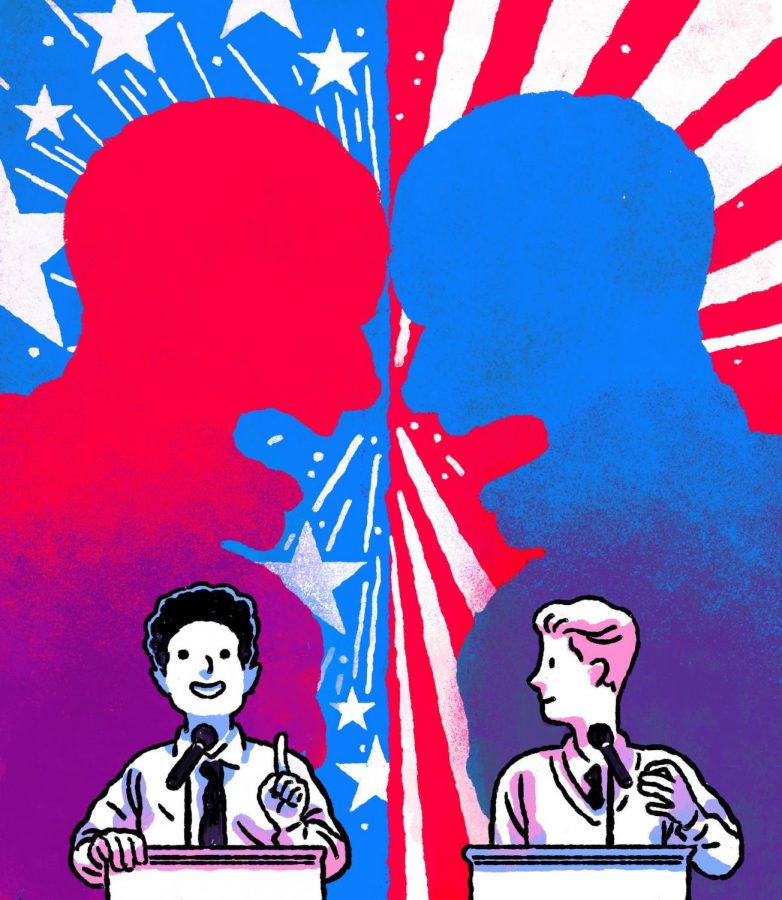 How are we going to start having better political discussions at school? (New York Times; Pope)

The presidential election is finally over, and we now have a chance to relax and reflect on what has been a turbulent past few months. And it is clear that with all of the name calling and arguments, trying to find policy information was like looking for a needle in a haystack of all-caps Twitter posts and slanderous ads. As well, as a leftist myself, I find it difficult to have productive conversations with people who supported Donald Trump, but I do think that if we ever want to move forward from this election, we’re going to have to have conversations about difficult subjects. I wondered why these discussions aren’t happening, and what we can do to facilitate them in the future.

While American politics have always been somewhat divisive and uncivil (think of the musical “Hamilton”), a common sentiment is that American political discourse has taken a turn for the worse over the last few years. To understand how we can reach a state in which we can have respectful political conversations both at the local and the national level, we need to take a look at the root problems of our political discourse. According to data from a Pew Research Center article on the public opinion of American political discourse, 55% of Americans think that Donald Trump has changed political discourse for the worse, and 24% say that he has changed it for the better. Misleading statements and outright lies about candidates have become commonplace in the Trump era. While I believe that Trump is a major influencer of politics at a national level, it is also important to note that some of his tactics, such as the focus on opponents’ personal lives rather than policy, have been used throughout American history. Political division is commonly blamed on Trump and the Republicans by liberals; however, we create division ourselves through our choices of who we interact with.

The rise in popularity of social media has changed the entire world profoundly by facilitating Trump’s and others’ tactics of spreading misinformation. Social media also allows people to argue with each other with the safety of anonymity, making the public political discourse far nastier. A third, often overlooked, result is that people can protect their own opinions from cross-examination and opposition by only engaging with like-minded people on social media. If you have social media, take a look at which accounts you follow. I follow very few people that I don’t agree with personally. We can choose who we interact with on social media, so we mostly choose to interact with people who we agree with, meaning that our beliefs are rarely challenged. This means that our beliefs become increasingly radical and polarized, because we only reinforce our own beliefs and we rarely have to think about opposing opinions. In this way, the lack of cross-party communication has an effect within a party, but it also has an effect on opinions and relationships with the opposing party. The Pew Research Center also found that the majority of members of both political parties hold the opposing party to a higher standard than their own and are more likely to criticize members of the opposite party than members of their own. In my opinion, by mainly interacting with people that we agree with we restrict ourselves from making personal connections with people that we disagree with. This means that we are less likely to consider the human aspects of reasoning behind the ideas that we disagree with. If you never interact with someone you disagree with, how are you going to understand the values and experiences that define them as a person?

The political discourse at Lakeside has been affected differently by the Trump presidency. Having a president that so brazenly promotes hate speech has made the outward expression of hate more common nationwide and reinforced the necessity of a policy against hate speech at Lakeside. However, the presence of this hate speech in the Republican party creates a general sentiment that all conservatives or moderates believe in the hateful opinions. Liberal Seattleites and Lakesiders often shoot down conservative opinions at a single glance and fail to consider the reasons and values underlying those opinions. In the Tatler Poll, 38% (52) of respondents said that they would not feel comfortable expressing a controversial political opinion at Lakeside. Of those respondents, 62% (32) felt that non-liberal political opinions aren’t respected by the Lakeside community. Some respondents also expressed that Lakesiders easily validate liberal opinions without much careful thought. Lakeside claims to foster an open environment of discussion, but an unspoken agreement exists among the community to believe what everyone else believes.

The political discourse at Lakeside is further harmed by the political homogeneity of Lakeside and Seattle. According to campaign finance data on individual contributions from the Federal Election Commission, 502 separate political donations were made by Lakeside staff in the 2020 election season, all of them to candidates or organizations associated with the left. Because it seems like everyone at Lakeside shares the same set of beliefs, systems of peer pressure push everyone to fully align with liberal beliefs, and ostracize those who don’t. It’s common to assume that all of someone’s political beliefs fall under a single party line, so when a person shares a controversial political opinion an assumption is made that the rest of their beliefs, both political and personal, fall under the same party line.

How are we going to start having better political discussions? An often overlooked method of understanding another person’s beliefs and convincing them of your own beliefs (wink wink) is to look at why they believe what they do. While most people, myself included, would say that they are empathetic, it’s hard to observe someone’s political beliefs from their point of view and not your own. Personal experiences and moral values have a profound influence on people’s political beliefs, so approaching a conversation from your own point of view won’t get you anywhere when it comes to understanding the reasons behind someone’s beliefs. Likewise, approaching a conversation with the intent of understanding another person’s beliefs rather than trying to convince them of your own will lead to better conversations with better results. Having political discussions in which our ideas are tested not only leads to more-refined arguments and ideas, but it also helps unify opposing believers even if the conversation ends with a disagreement by allowing for the flow of ideas between party lines. Have intentional conversations with the intent of understanding another person rather than proving them wrong. Think of it as a conversation rather than a debate.

The progress that we could make as a country and as a community is hindered by an ideological divide, and we need to become more unified if we want to have a chance of making productive policies. On the other hand, it is still important to stand up for what you believe in. I’m not asking anyone to abandon their beliefs and values, but we need people to challenge our own beliefs as much as we challenge those of other people. With a respectful, open and productive political discourse, we can get things done that work for most people rather than the slight majority of them.