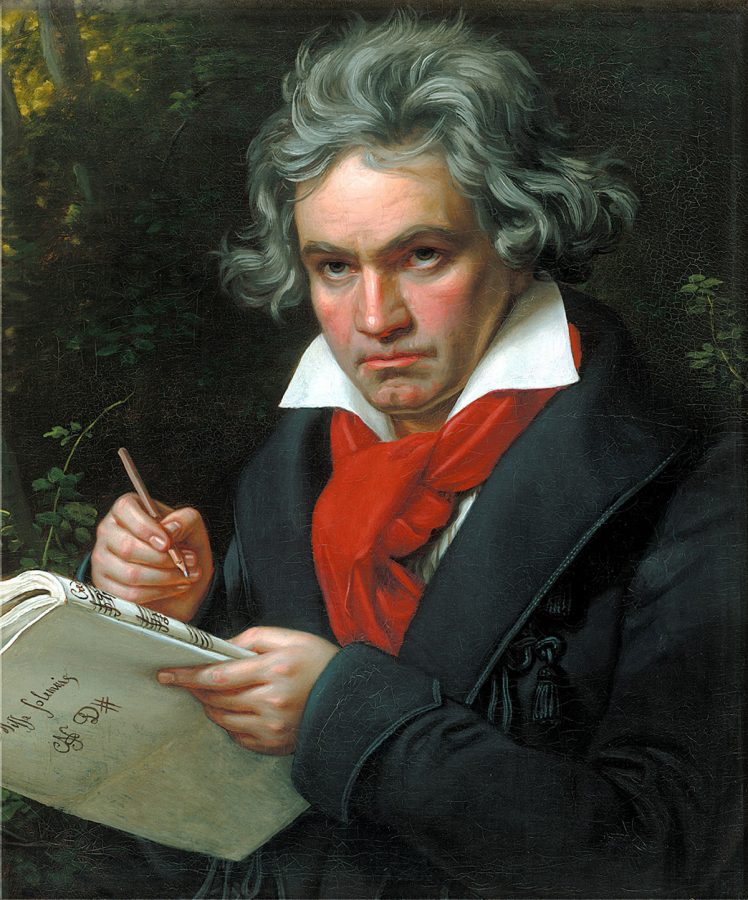 The legendary composer Ludwig van Beethoven was born on December 17, 1770. This December marks his 250th birthday, so it’s time to throw him a birthday party and celebrate.

If Mozart is known as a musical prodigy, and Bach is known as a melodic perfectionist, then Beethoven, the semi-deaf composer who vowed to “seize Fate by the throat,” is known as the Thor of classical music. Beethoven, who lived through the American and French revolutions, expressed his power and pride through his passionate music. His musical training began at the age of four with his alcoholic musician father. By the age of 16, he was already earning a salary as a professional organist. However, early symptoms of his deafness began when he was around 30.

Beethoven is also known as one of the most disagreeable composers of all time. He reportedly sprinkled trills into his piano compositions simply because he wanted to “embarrass those Viennese pianists, some of whom are my sworn enemies.”

However, that didn’t stop him from having a lucrative career and writing beautiful music. Two hundred and fifty years later, Beethoven is remembered less for his cantankerousness and more for his brilliant and beautiful compositions. Ms. Johansen, Lakeside music teacher and Orchestra and String Pedagogy Coordinator, has a whole array of Beethoven pieces that she enjoys. As a violinist, she says that she likes Beethoven’s symphonies the most. “I love [Symphony] No. 7 for sentimental reasons…the second movement never fails to give me chills,” she says. Symphony No. 6 is also one of her favorites because it is “wonderfully beautiful and descriptive in its programmatic elements,” as is Symphony No. 9 “for obvious reasons.”

Last year, the Lakeside Upper School Orchestra played the first movement, “Poco sostenuto — Vivace,” of Symphony No. 7, which begins with an expanded introduction of running scales and key switches, then — after sixty-one repetitions of the note E — transitions into a livelier, dance-like section. Mr. Krus, Director of Visual and Performing Arts at Lakeside, comments that “this piece is the rock and roll of 200 years ago…. The second movement will tear your heart to pieces and the fourth movement will put it back together.” Beethoven himself regarded this piece as one of his finest works, as it supposedly extricated him from his pecuniary difficulties.

Our Voice Club Leader Grace P. ’22 recommends Beethoven’s “Concerto for Violin, Cello, and Piano in C major, Op. 56” — better known as his Triple Concerto (“Sorry Spring Sonata,” Grace remarks). She was “interested by the idea of three soloists with accompaniment.” The piece is “basically a piano trio” — her favorite form of chamber music — “with minimal dialogue with the orchestra.” As a violinist, she thinks that finding the right balance between the soloists and the orchestra is challenging, and collaborative performance of the piece is key to its success.

Other notable Beethoven works and familiar tunes include his “Symphony No. 5,” known more for its first eight notes than the rest of the piece combined; Für Elise, famous for its simple and charming beginning; the “Moonlight Sonata,” known for its mysterious and romantic improvisational movements; the “‘Emperor’ Piano Concerto,” famous for its major-key grandeur and near-dedication to Napoleon Bonaparte; and “Fidelio,” Beethoven’s only opera, celebrated for its ode to freedom “‘The Prisoners’ Chorus.’”

December is a season filled with incessant holiday jingles and endless replays of “All I Want for Christmas is You” but if, at any point in time, the rhythmic sounding of jingle bells begins to feel tiring (maybe even deafening), I highly encourage you to try out some Beethoven compositions. They tend to be loud, angry, and powerful — just the right mood to let out holiday-induced stress.