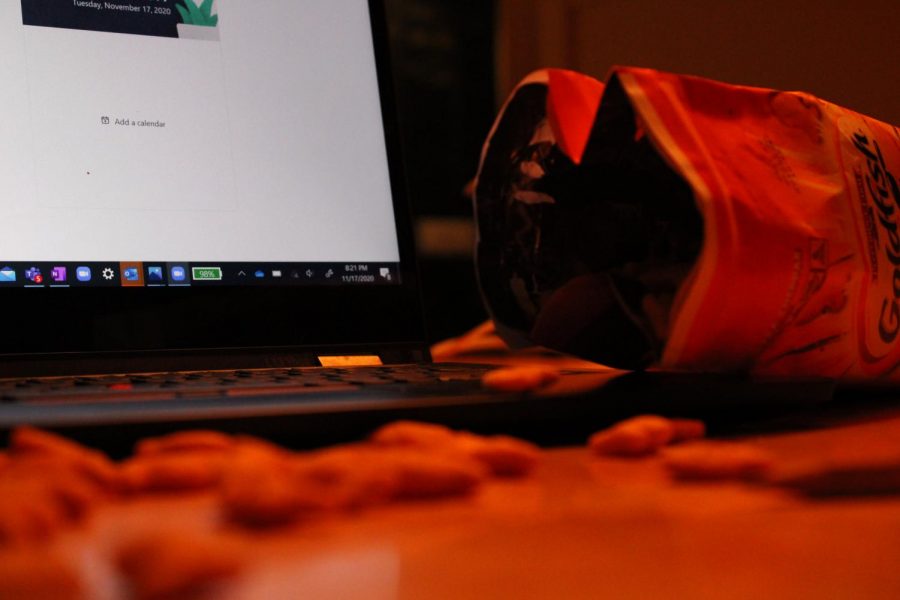 It’s 9:10 in the morning. You just woke up a few minutes ago to catch your first class, but you haven’t had time to eat breakfast. By the time class is over, you feel like you’re starving, but it’s still way too early for lunch — time to get a snack.

Snacks are a great way to boost focus and improve your mood. Most students don’t have a problem with their peers (or themselves) eating snacks during class. Out of 120 Tatler Poll respondents, around 85% believe that students should be allowed to eat snacks while on Zoom; the remainder say it depends on the class, likely because of situations like at-home chemistry labs or instrument practice sessions. In general, Lakeside students are responsible with their snacking — of the 100 Zoom snackers in the Poll, 60% say they only “occasionally” have a bite.

Needless to say, not all snacks are created equal. Here are some of Lakeside students’ top picks:

Smoothies. Universally extolled for their healthiness and fruit-filled flavor, smoothies are great because they can satisfy your hunger and your sweet tooth simultaneously. They’re also convenient, being a snack that you drink instead of chew. If you have an opaque mug, so much the better — it’ll be impossible for anyone to differentiate a smoothie from plain old tap water.

Goldfish. This one particular snack was highlighted more times than any other in the Tatler Poll. Come to think of it, though, it does have certain alluring qualities. Each goldfish is small, so you can easily grab a handful and shove them in your mouth while pretending to stifle a yawn or cover a laugh. They’re also bite-sized and go down fast, so if you are unluckily cold-called, you can immediately recover. They’re also not as oily as other snacks, so you won’t have to worry about grease stains all over your touchscreen or keyboard.

Potato chips. One great thing about potato chips is their variety; I can probably name more than ten flavors off the top of my head in five seconds. One student says that they eat chips simply because they couldn’t do so when classes were in-person: chips are loud, they noted, but now there’s a virtual wall (i.e. mute button) blocking your savory crunching from everyone else’s ears.

Fruit. Fruit is healthy, and vitamin boosts are one of the best things we can do for ourselves. As we all know, Vitamin C and fiber are very important for our bodies, and we should consume as much as possible. Furthermore, plain fruit can easily be jazzed up: If winter isn’t too cold yet, I’d take frozen grapes or blueberries over popsicles any day.

Some other delectable and convenient snacks include gum, tea, pretzels, cookies, and Kind bars (“gives me nostalgia for the WCC,” says one junior).

Anyways, what’s in a good snack? Most students agree that it should be something bite-sized so that you can respond quickly when called on. Crunchy snacks are preferred over chewy ones because picking your teeth in front of your webcam is not something you’d like to do or something your classmates want to see. Those are all some factors to keep in mind the next time your stomach rumbles in the middle of class. Just don’t be the one who eats a three-course gourmet lunch in the middle of history.