A month ago, our friend Ethan D. ’22 told us about an Instagram story he’d been tagged in from Hieu T. 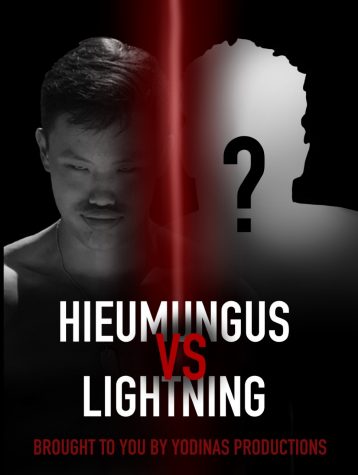 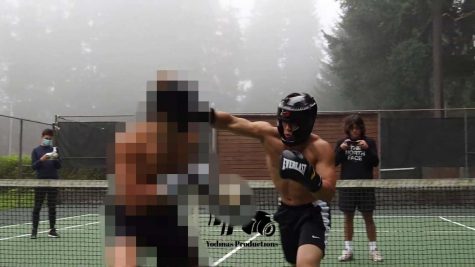 ’22 (@206hieu), a junior notorious for his weightlifting and larger than life personality. In the story, Ethan was challenged to “fight [Hieu] for charity.” Ethan respectfully declined, but on October 3rd, a boxing match still took place. In the resulting footage that “premiered” on Hieu’s Youtube channel, we watched Hieumungus battle it out with his latest rival, Lightning, in the Highlands. The two were surrounded by (mostly) masked spectators as well as the creator of the video, Yodinas Productions, and the referee of the game. After fifteen minutes of drone footage, sportsmanlike play, and quite a few breaks, Hieumungus was declared the winner. Despite Lakesiders being separated by remote learning and quarantine, word of the fight and Hieu’s victory got around fast. Considering the hype that the match created, we decided to speak with some key players of this recent Lakeside pop culture event: Dash B. ’21, Hieu’s coach; Torin B. ’22 (@artofkong), the graphic designer of the event; and the man himself, Hieumungus. We reached out to Hieu’s competitor, Lightning, but he declined to comment and requested to remain anonymous.

Hieu, despite his confident persona, was initially nervous for our interview and showed up on Zoom wearing large black wrap-around sunglasses, declaring, “I don’t want people reading my eyes.” Once we assured him that he wouldn’t face disciplinary action, the glasses came off, and the truth came out. Hieu confirmed that the fight took place at an “undisclosed location in the Highlands,” which, by watching the video, we learned was a tennis court. As the Highlands is a gated community, Hieu and his clan looked to the Yodinas Productions company, who are residents there, to let them in.

The fight’s motivation came because Hieu was looking to kickstart his YouTube channel (Hieu Tran). Hieu explained his thought process to us: “I was like, what is something a lot of people want to watch?” The first thing that came to his mind was the videos he had seen of popular YouTubers boxing each other— think Logan Paul vs. KSI. Thus Hieu set off to find a worthy competitor. His first choice was Ethan, his self-proclaimed sophomore-year weightlifting rival, but Ethan declined the challenge. Luckily, it did not take long for Hieu to find a new dueling partner, Lightning. It’s important to know that safety rules were put into place as neither one wanted to injure the other— the match was created to be a fun game between two friends with confident personas and a similar sense of humour. When we spoke to Torin, the artist behind Art of Kong and the powerful graphic used to market the fight, he noted both competitors’ reputations; in his graphic, he said, “I wanted something very simple yet powerful to get people excited and show off the big personalities of the fighters.”

From the beginning, Hieu took his training very seriously, borrowing a punching bag from a friend and getting to work. He told us, “When you play a lot of one-on-one sports, you start doing something called visualization. So every day, I would just imagine fighting [Lightning], or boxing [Lightning], in my head and winning. When you visualize something, it comes true.” Although Hieu considers himself a “pretty nice guy,” this wasn’t his first fight. Hieu recalled to us how around seven years ago, he had to stand his ground when his fellow fourth-grader tried to take the wagon he was pushing away from him on a school field trip. It was moments like these that helped prepare Hieu for his match against Lightning.

Throughout the whole process, Dash, B. ’21, was by Hieu’s side, serving as a coach. We reached out to Dash to get some insight. Dash’s career in boxing began two years ago when his house was robbed, and up until an injury a couple of months ago, he’s drilled every day.  Dash’s verdict on the match was a positive one: “Hieu had the raw power, confidence, and aggression to control the fight.” In his Zoom interview, Hieu told us that his opponent had roughly twenty pounds and six inches on him, and that was Dash’s main worry going into the fight. But, ultimately, “Hieu came out swinging… and never really lost that edge.” What gave Hieu the victory in a fight that was stacked against him, we wondered? “Hieu showed absolutely no fear,” said Dash, “Hieu’s confidence was one of the deciding factors, and without it, we could easily be looking at a different result.”

As for the future, Hieu has big plans. Not only does he want to grow his Youtube channel, but he intends to debut next football season — although his parents don’t know that yet. In addition, he’s using this article as an opportunity to challenge someone else. If your name is below, Hieu has sized you up and wants an opportunity to take you down. Because of social distancing, the Tatler can’t officially encourage any of this, but we wouldn’t mind another chance to write about the adventures of Hieumungus.

Even despite his confidence going into the match, did Hieu ever consider the possibility of walking away with a loss? Apparently not, as Hieu told us:  “I don’t like losing. Although I think I’m a literate person, losing just isn’t in my vocabulary.”