Is There More Cheating in Online School? 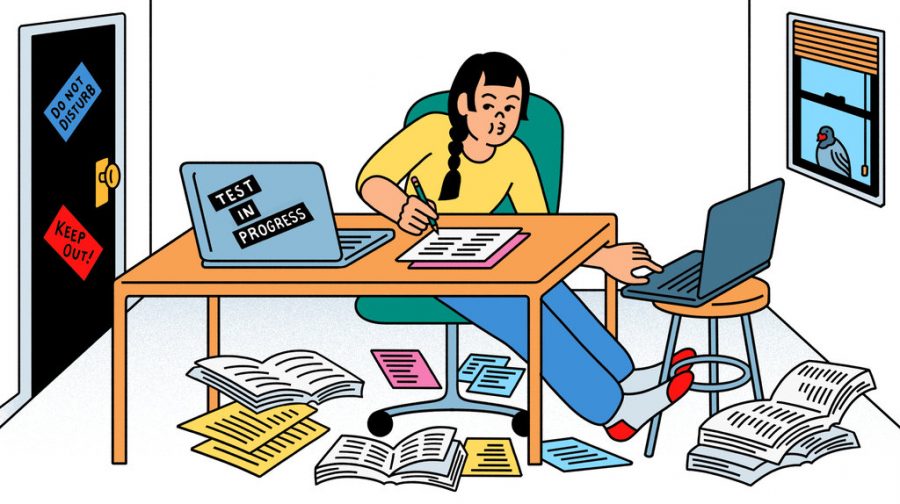 Almost immediately after schools across the world shut their doors and went online in the face of the COVID-19 pandemic, the question arose: what to do about tests? In the United Kingdom, A-level exams (something of a cross between the U.S.’s SAT and AP tests) were cancelled and scores were instead awarded by a controversial predictive algorithm. In the U.S., most ACT and SAT tests were cancelled, but the AP tests were offered online. As they navigated confusing instructions and poor WiFi connections, AP students asked themselves: isn’t everyone just going to cheat anyway?

In the spring, Lakeside cancelled most tests and offered assignments that could only help students’ grades. As the pandemic stretched through the summer and into the fall, it became obvious that in the case of online tests, they were delaying the inevitable. Now most classes offer tests on a normal schedule, with some adaptations for the online format. But are more people cheating? And if so, what is Lakeside planning to do about it?

Responses to the Tatler Poll showed a few clear trends in student opinions on cheating. Many wrote that, following conventional wisdom, they believe there is more cheating. “It’s easier to do without getting caught — I know of a lot of people who have cheated who would never have done so in-person,” writes one anonymous junior. “School is unreasonably difficult right now, and we are all just trying to get by in an extremely competitive environment in the middle of a global pandemic.” The rest believe that actions by teachers and the school community prevent most online cheating, with a range of sentiments from “I believe in the integrity of the Lakeside community” (anonymous freshman) to “the administration has us scared sh*tless” (anonymous senior). Teachers also received appreciation for their flexibility and willingness to offer open-note tests.

Jenny L. ’21, chair of the Judicial Committee, also thinks there’s less cheating in online school, but for different reasons than poll respondents. “Cheating occurs in high-pressure situations,” she explains; students are most tempted to look at a peer’s work when seated for a stressful test or to plagiarize when up late at night finishing a paper. In online school, where work is self-paced and mostly projects, she believes fewer people will cheat. She’s backed up by the JC’s numbers: in all the months of remote learning, they’ve heard only one cheating case.

Eliminating those high-pressure situations was done by design. Teachers have restructured assessments to be open note or to have a focus on reflection and feedback, rather than traditional metrics of grading. For example, some math assessments have allowed the use of outside resources with a reflection on the resources the student used, the idea being that removing a focus on getting the right answer would de-incentivize cheating. The focus has then been shifted toward feedback and communication of solutions. Similarly, in Computer Science 2 and 3, a new two-part test consists of a traditional hand-written assessment paired with test corrections during the exam, when students can then use outside resources. “The theory behind that is that it reduces the value of cheating, because they’re going to be able to check their answers anyway,” CS teacher Ms. O’Neal says.

For lessening cheating, discussions that explicitly address it help. In fact, “the fact that [students] know that CS is concerned with cheating,” Ms. O’Neal says, “is actually a reflection of one of the ways we deal with it, which is we talk about it; we are very explicit about it.” She explains that CS did have a cheating problem several years ago, and “part of that seemed to come from the fact that students weren’t sure where the line was.”

Thus, another point of emphasis in reducing cheating is to be explicit about rules and conditions, including which resources are allowed. “Sometimes cheating happens because of lack of clarity in instructions,” Mathematics Teacher Mr. Platt says, “and we have to own that as teachers. And especially in a remote setting, we have to be very clear about what the parameters are.” He says, “If the proper parameters are set out in advance as to what the purpose is, then students have little incentive to cheat.”

Mr. Platt notes that he’s “received good buy-in from students” on discussions about parameters. From what he’s seen, students are more likely to acknowledge struggles if he’s had an explicit discussion about the purposes and guidelines of the assessment.

Teachers are also pairing reflection-based assessments and explicit discussions with traditional checks for plagiarism and cheating, including the CS Cheating Checker. Taken from the University of Washington, it can compare student programs to programs of other students in the class, as well as past students, and produce a percentage of similar code. Ms. O’Neal notes that it is designed with coding in mind; for example, switched variable names will still be counted as similar code. However, “it’s not the be all, end all,” she says. “If it flags something, it just means that it’s something that we need to look at.”

In redesigning for online learning, a key aspect of assessments has been reflection and feedback. Moving into more abstract questions such as “How” and “Why” may be a boon not only in making cheating weird or obsolete, but in guiding students towards manners of thinking in adult life, where it’s not so easy to Google the answers. “There’s only so much we can take students towards,” Mr. Platt says, “It’s your choice at the end whether to take it or not.” Acknowledging that eliminating cheating is difficult, he says, “It’s teaching a bigger picture lesson: to own up to things.”