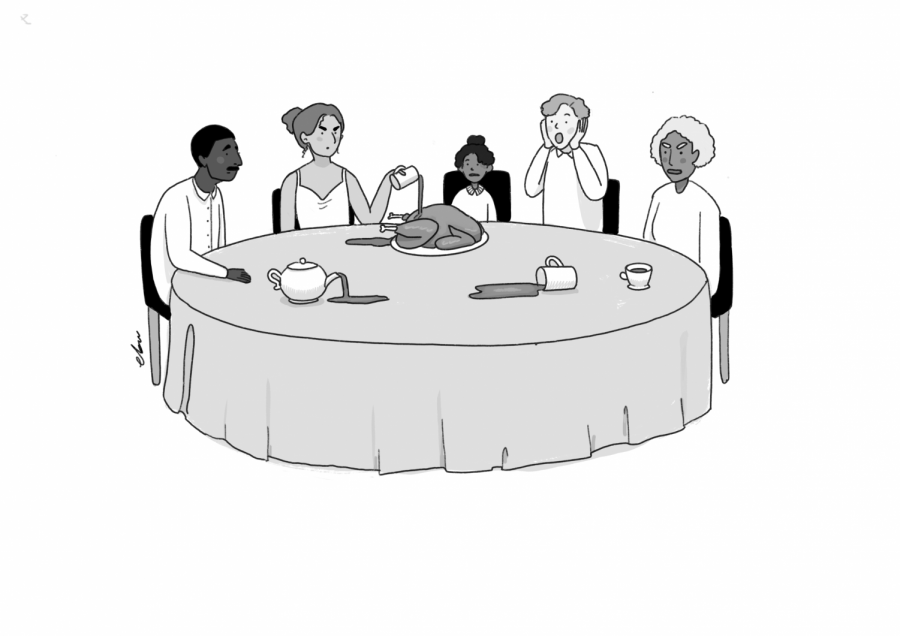 We all know that Thanksgiving cliché of families throwing insults (and sometimes food) across the table, but did you know that this is reality for some Lakeside students? Some of our peers describe awkward moments as steamy as their holiday glass of apple cider, and others tell us about family drama as raw as the turkey your auntie didn’t leave in the oven long enough. In this month’s poll, we asked some Lakesiders to dive into their Thanksgiving dish, then provided some commentary.

Answer: My cousin put gum in my other cousin’s hair, and we had to cut it out using safety scissors because we didn’t want the parents finding out.

Fiona: So the gum didn’t stick around?

Estelle: No, it caught the chew-chew train to massa-chew-setts.

Answer: My uncle just left in the middle of the night (we were all in Cali), and no one knew where he went because he didn’t tell anyone.

Fiona: Did you find him again?

Estelle: Or will we be seeing him on the back of a milk carton?

Answer: One year, we put the turkey in the oven and realized 4 hours later that the oven was broken, so we ended up having turkey meatballs from the microwave instead. The next year, we set the fire alarm off once again, cooking the turkey.

Estelle: Maybe you should stop trying to cook turkeys. Your family can share chicken tenders instead.

Fiona: Or just stick to take out.

Answer: Why you tryna get family drama!? You’re sus.

Fiona: Well I saw you vent. What do you have to say about that?

Answer: Once, I ruined a party because I had to poop and ended up clogging the only toilet. My whole family was making fun of whoever pooped, and my 13-year-old self was sitting there in pure shame, hoping no one realized it was me. It took basically an hour for my grandpa to get it unclogged (I did not feel well that day). They still talk about it to this day, but only my sister knows it was me.

Answer: My parents told us they were getting divorced.

Estelle: Very Chandler Bing. Do you also use humor as a coping mechanism?

We agree. However, this food-filled weekend is definitely going to be a little less normal this year. Because of the coronavirus, you probably won’t be clobbered with hugs from Creepy Uncle Jim or forced to compete with your cousins for your Grandma’s attention — but at least we can spare ourselves the drama of clogged toilets and gum-in-hair situations. The coronavirus seems to be devouring our lives like your brother does his turkey, but make sure to still celebrate with loved ones, on Zoom or not. Happy Thanksgiving, Lakesiders!