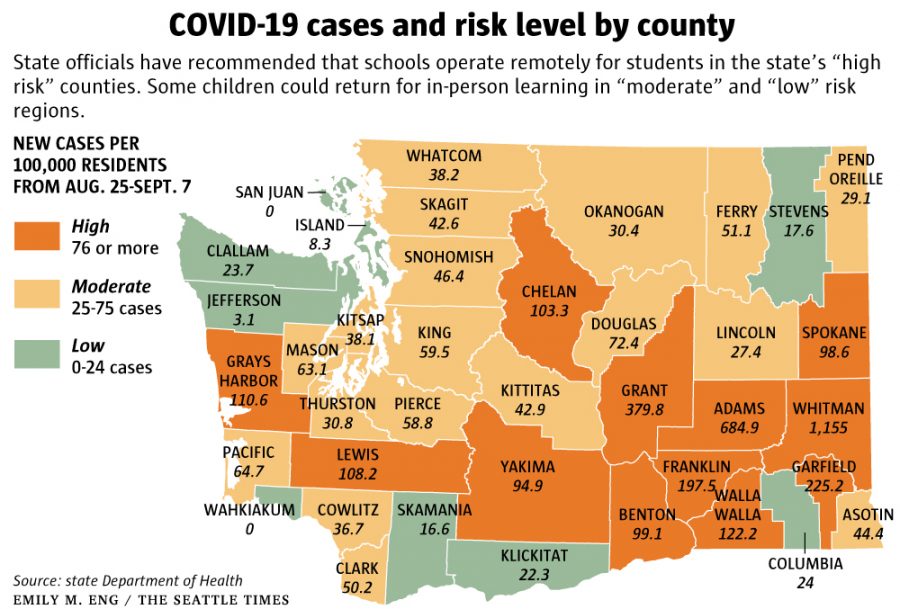 As we all know by now, Lakeside has decided to delay reopening until further notice. In the originally proposed model, each week, half of the school would be in person while the other half stayed remote. In previously preparing to reopen, Lakeside has put in a lot of effort, whether it was modeling and tracking COVID-19 data or renting four new portable classrooms to aid in distancing during classes, but it was still questionable whether reopening then was a good idea, and that is why I think delaying reopening is the right choice.

Let’s talk first about why we need to reopen in the first place. There are many benefits to in-person learning. In the remote setting, many feel disconnected and less excited for school. Social interaction and building connections are difficult, especially for freshmen like me who might not know many of our classmates. Even those who came from the middle school are finding it hard to make new friends among that pool because there are so few interactions with each other. There are also smaller grievances, like poor WiFi, power issues, loud family members, etc. In short, remote learning is not ideal. There are many facets of it that are out of our control and in that way it is less effective than in-person learning. While Lakeside has done a great job of maintaining near the same level of learning as usual, remote learning lacks other equally fundamental aspects of school, hence the haste to reopen. To help with that goal, Lakeside has done some remodeling for physically distancing, with the new portable classrooms and face mask requirements as well as a new transportation plan. There’s also a list of guidelines on the reopening webpage as well as a risk assessment updated daily. Clearly the school made a tremendous effort to ensure the safety of all attendees. So why, then, delay?

Because late October was not, perhaps, the best time to reopen. At the time of writing, according to the reopening page, the level of risk is now red (high), meaning the general conditions of which are extremely unfavorable. If we had opened on October 26, it might have been very risky, as, especially when reopening is fresh, problems may arise, and these circumstances have never been tested before, so it’s not really known what might have happened. The original plan of opening so close to Halloween was another unknown. The holiday has traditionally been filled with encounters, with parties, celebrations and trick-or-treating, and we’re uncertain of what will happen this year.

Furthermore, the flu season occurs during fall and winter months, which we are in right now. With coronavirus similar in some ways to flu, cases might spike at this time of year. As epidemiologist Andrew Noymer of the University of California at Irvine said in an article in the Washington Post, “‘I expect fall waves starting in mid-October and getting worse as fall heads into winter, and reaching a crescendo certainly after the election’” (Achenbach and Weiner). Mid-October is the projected start of reopening. If COVID-19 cases increase then, what would happen? According to the Lakeside website, when the level of alert has risen to red (which it is now), everyone will be remote. More news about the coronavirus is surfacing, and some of it is frankly disturbing. If the level of alert was not red, we had reopened and cases spiked up, we might have been forced to return to remote learning after just a few weeks, not to mention having increasing risk levels for students and their families. In some ways, reopening had asked us to choose between risking members of our families who may be more vulnerable to COVID-19 and the social parts of our educational experience. And I’m not sure that’s a good trade-off at this point.

The Lakeside Bubble also relied heavily on the actions of each individual, which, because one of Lakeside’s values is integrity, should have been relatively low-risk. However, because Lakeside is a small school, the actions of just one could affect many. I did not attend in-person advisory myself, but some people I talked to said that social distancing was lax a few times. Six feet is very long, longer than one might think. That’s taller than the average height of a high schooler. Imagine holding a conversation with a friend separated by your height. Either you would raise your voice a little and school would become much louder, or you might inadvertently move closer. Would you choose a decent conversation or choose obeying the rules of social distancing? And if you chose the latter, is there really much to gain socially? Therein lies the problem. Do some complementary counting and probability. With fewer people, the risk is lower. But with more people, that gets higher. Significantly higher. There are questions too. How would people get from class to class walking six feet away from each other? What would happen if there were more people than the socially distanced buses could hold for transportation? And even if everything worked out perfectly, would hybrid learning give us the sense of school, of normalcy that we want? There are just too many unknown variables and risks that in my opinion made it tricky to open right now.

Perhaps it would have been all cleared up after a few weeks of hybrid learning, but the option of going to school in-person then was not what I considered a necessary risk. Online learning may be more tedious and less interactive, but personal factors for students deserve heavy consideration. Although the Lakeside team has no doubt done a wonderful job of setting up all of the precautionary measures, it’s still a hard choice deciding whether to go or not, especially with peer pressure as so many were excited for hybrid learning. Whatever the reason for delaying reopening, in my opinion the decision is wise, and I thank the Lakeside Administration for their caution.