Racial Equity at Lakeside: A Q&A With Melissa W. ’19 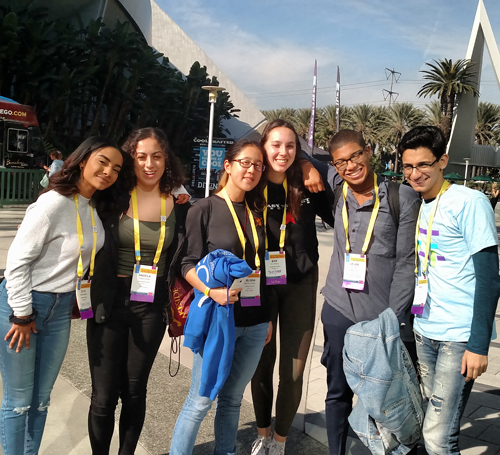 When I spoke with Profe Bensadon last month, she championed Melissa W. ‘19, who advocated for more adult support in racial equity work. Because of Profe’s enthusiasm, I sat down to speak with Melissa, now a sophomore at Yale, about her advocacy experience at Lakeside and what she hopes to see the school do in the future.

Can you speak to your experience as an advocate on campus?

Before my junior winter, I was reading a lot, learning a lot, but I was never–and never have been–involved with on-campus groups. Then, I went to the Student Diversity Leadership Conference (SDLC). One of the speakers there really changed my life; he said, “What are you doing to create change? How are you putting in the work to make your imagined future a reality?” And that really propelled me to start doing something.

The people who went to SDLC were supposed to bring something back to the community, so we thought we could bring back some of the activities: the small conversations, the silent movement. (The silent movement showcases the diversity–or lack thereof–of a community. A moderator asks for students to stand up if they identify, for example, as white. This process repeats for a variety of demographics: race, class, gender identity, etc.) In the end, there was an opportunity for us to create a whole day of programming for Lakeside students: we led with the silent movement, then split into little groups–almost like TBH talks but student-facilitated.

I also spoke at the T.J. Vassar Diversity event and also with faculty, where we brought up some complaints, like English and History courses that were very Eurocentric.

Could you tell me more about SDLC? What was that experience like?

SDLC is a conference run by a collective of independent schools. Our opening ceremony actually started with a student silent movement, so that’s where we got our inspiration; as well, we had speakers: Kimberly Crenshaw, who came up with the term “intersectionality” and was a lawyer on the Anita Hill case, and DeRay McKesson who became famous as a protestor at Ferguson, to name a couple. I don’t always agree with him, but I quoted him earlier; his speech did change my life.

We each have a family group of 30 people–these are strangers, you’ll never see them again; that’s the strength of it. You can say what you want. Also, we had affinity groups. I went to the Asian one, which empowered me to see a roomful of people who believed in the things that I did and looked like me.

As you mentioned, you brought the silent movement back to Lakeside. Why? How did it go?

At Lakeside, people were nervous. These were people you had to go to school with day after day, so we really emphasized that there was no pressure at all to stand up–though we definitely should have thought more about ability and disability; we were asking people with disabilities to stand up, which isn’t always possible.

It was just a chance to look around and see, either if they were marginalized, that they were not alone, or if they were in the majority group, how many people there were compared to other groups.

On another note, I know you did an Independent Study in your senior fall about the intersection between language and oppression… could you tell me more about what that looked like?

My Independent Study was just me reading a lot and making my own conjectures… I looked at different facets of language–how it can be used as a tool by the oppressors to silence people, how it can be used by the oppressed to reimagine a better future, what it means to be nondiscriminatory in your language. And at the end, I wrote up an essay–a “manual”–about my findings.

On that theme of language, do you have any book recommendations for those interested in learning more about racial equity?

“Sister Outsider” is my favorite book; I would really recommend it, especially for anyone who wants to get a sense of how important the Black feminist movement was. I also would recommend “I’m Still Here” for people who are already doing activism work. Also, “The Color Purple,” which changed my life.

Obviously, you don’t go to Lakeside anymore… but what do you think about its racial equity work given your history here on campus? What could be changed or done differently?

The teachers and administrators who are doing that work are definitely moving towards goals that I agree with. Compared to other schools and universities, they’re genuinely trying to be progressive.

That being said, there are a lot of things that they can do better. A lot of the activism on college campuses–and I’m going to extrapolate to high school campuses as well–is focused on DEI, on making an exclusionary place, one that was never your home, a home. That isn’t going to work unless there’s structural upheaval.

Lakeside is trying to keep up with the movement of society, but what they aren’t doing is staying ahead of the curve. They really should be striving not to just go with the flow but think empathetically about what would be good for its students, doing what’s right because it’s right.

I also feel very strongly about the role of adult leadership. Now, Lakeside adults are stepping up, which is great, but in my time, I didn’t see that as much. In an educational space, the adults and educators need to take more responsibility for protecting students and bridge that gap to people who might not be tuned in to social justice work before.

You mentioned that you were inspired by the idea of realizing your “imagined future”… what does that future look like?

I don’t want to say a place where racism doesn’t exist because that feels colorblind in a way that makes me uncomfortable, but I think we can definitely start with things like reparations, returning land back to Indigenous peoples, a collective reimagining of our future. A collective movement away from “I want to take what’s mine” and more towards the idea that our actions affect other people. That’s a world I would want to live in, a world where being kind and helping others are the most important things.