Lakesiders, Assemble (For No Particular Reason) 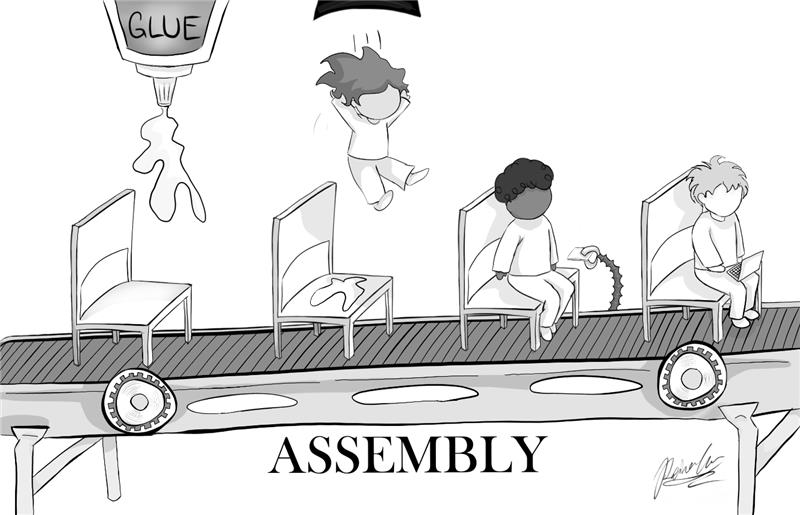 Assemblies, throughout my entire time at Lakeside, have been subject to some lighthearted ridicule. For every great roster of speeches, intriguing guest speakers, and engaging activities, there seem to be two of each that are joked about in the following periods. It’s become one of the most popular intracultural jokes to eke it out through an assembly. This problem has only been thoroughly exacerbated by virtual assemblies, yet another product of a Covidian Lakeside. While not fully representative of the Lakeside student body as a whole, Tatler poll results aren’t pretty: of respondents who answered questions about assembly (n=23), 70% thought virtual assemblies have been less worthwhile than regular assemblies, and a whopping 91% reported being less engaged in virtual assemblies than regular ones. If anecdotal evidence means anything at all, these numbers aren’t too far off mark. Why are assemblies, especially virtual ones, almost unanimously mocked by students?

I’m a longstanding supporter of assemblies. Gathering the entire Lakeside community under one roof, grabbing its collective attention, and directing that to the important issues of the day has the potential to unify the school and solve the problems that plague it. Were assemblies to live up to their potential, they’d be unrivaled. And yet, even before COVID disgraced the world with its presence, Lakeside assemblies carried shame with them each week. I can’t count the number of times I’ve walked out of assembly and heard remarks on its being boring. To ‘fess up, there have been many times I’ve agreed. Assemblies which are stunning and engaging come often, but not often enough to soften the blow of a mediocre assembly.

Why does the quality of an assembly matter so much to the student body? Well, it’s like I said: everyone is gathered under the same roof. So much potential is squandered for every assembly which fails to engage people. What’s more, because of this, people can come to see assemblies as shoehorned into the schedule (I have, some weeks) and resent their precious free time being drained away. Think about it: in the current distanced learning environment, as soon as a mandatory Zoom call is over, the numerous benefits of being at home (even if you can’t go much of anywhere) are available. Why wouldn’t anyone try to minimize their time spent in school? Even as we transition to blended learning in the coming weeks, assemblies will maintain their virtual component for some time — and their level of quality for much longer (if not forever). It’s no wonder that, especially recently, assemblies’ faults have been greatly lamented.

I once heard Lakeside assemblies compared to filibusters, the word “filibuster” defined by Merriam-Webster as “the use of…making long speeches…in an attempt to delay or prevent action”. They’re often used by politicians to push legislation into the next legislative period. How is this comparison in any way legitimate? I thought about it for a while — and indeed, there’s a line of reasoning to be drawn. A filibuster’s only concern is to obstruct motion, to stall as long as possible, even if it comes down to citing oyster recipes (yes, this has happened). As seen by the Jet City Improv debacle of mid-September, Lakeside assemblies are, in much the same way, frivolous, dangling promises of epic legendry in emails and on-screen graphics, delivering an “oops” and fifty minutes of free time when the main attraction fails to materialize. Every assembly carries, oftentimes less explicitly (but still all the same) that expectation of something new and astounding. That preconception is encouraged by the administration each week. Putting off the good stuff for special holiday and intermittent “good” assemblies, I can understand the point of view that sees Mr. Noe’s now infamous “Sarge” speech as similar to a filibuster on the house floor.

What can be done to make assemblies worth students’ time, even when we finally return to campus in full? To answer that question, first one has to determine what freedom there is in planning any one assembly. What good is a solution when it can’t be implemented? When I dug a bit to uncover the truth, I was, and I say this in all seriousness, appalled. According to Shannon D. ‘21 on the Assembly Committee (which exists?!), the average assembly is about half predetermined. Only 50% (or in the ballpark) of a random assembly is even open to any input at all! Why does no one know this? The reason we have Jet City Improv come so often (or not) is because someone pays the school for them to appear each year! I don’t mean this to be rude, but Lakeside seems to have an incorrigible desire to run opaque committees for every low-level administrative process that goes on, rather than letting students know what’s up. I had no idea the Assembly Committee existed! And if you, dear reader, are being honest… you didn’t either. Even if you’re on the committee yourself, you might not know. Considering that only around 50% of any given assembly can be altered by the community at any moment, why is there no student-level input?

I’ve been whining about Assembly Committee and so forth, but honestly, I can identify two key issues that plague assemblies and many other similar communal institutions: lack of transparency and lack of common participation. On the latter point, if an assembly is going to gather up every student and direct their attention to something, shouldn’t they have some say? I have an idea to fix this: a ballot system. If a student wants something covered in assembly, they can post an idea ballot somewhere public and the community can vote on it. If that’s too complicated, a survey can be sent out with some pre-screened suggestions and a slot for students to offer their own. On the former point, why not create a repository of information which the entire community might find useful? Or perhaps run PSA campaigns? It’s such a shame to see people like Shannon while away in the background, relatively unknown!

At the core of this piece, in fact, is that idea. I may complain a lot. A lot. And I might run too far with the ball, so to speak. But it makes me genuinely upset when a moment with the potential to connect the community is squandered. More, when the effort put in by countless faculty members (and students!) is ignored and put down by the wider community, all because of the aforementioned disconnect in the moment. I realize I might be coming off like I don’t admire and appreciate everything that goes into delivering an assembly to so many students at so soul-crushing a pace. As someone unable to even imagine doing such a thing, I have to say that’s not true: if anyone involved in assemblies is reading this right now, feel free to toss my suggestions in the recycling bin. You wouldn’t be the first. But you would be the people I respect above all, doing your best to share your work with a receptive audience who can appreciate it. Common sense reforms, people, to use that tired phrase. Let’s assemble.