For @BlackAtLakeside, Social Media Is a Starting Point for Racial Justice 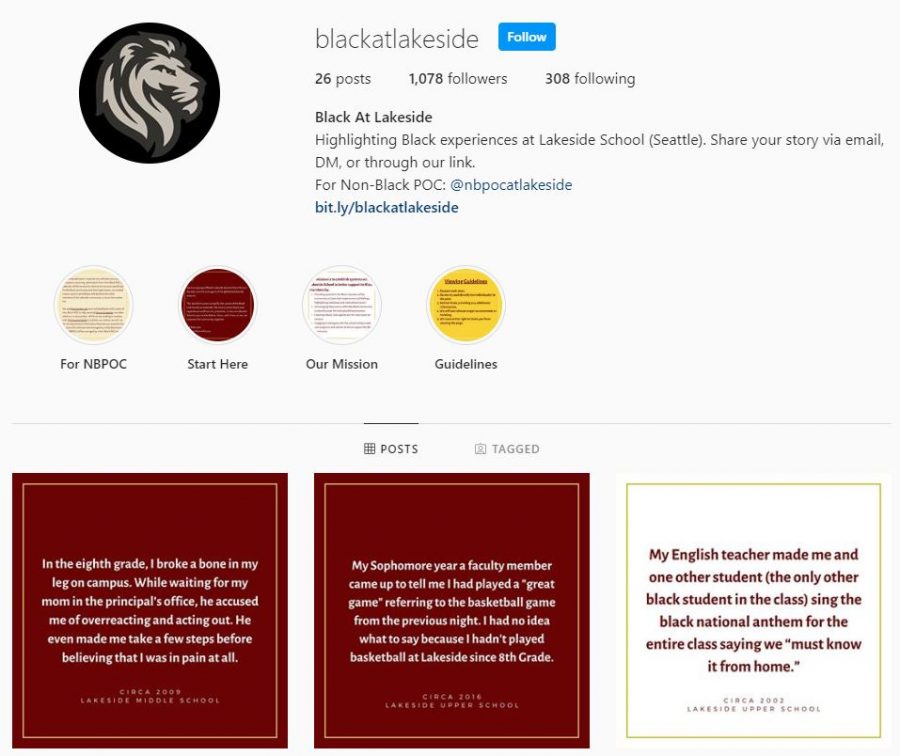 “Many of us feel that Lakeside was not made for us and it has not done enough to support its students that come from various socio-economic, cultural and educational backgrounds,” says a founder of @BlackAtLakeside, an Instagram account posting anonymous testimonies from Lakeside students, alumni, and teachers about experiences of racism and microaggressions at the school. “We, as BIPOC, all have stories about how we, our cultures and our backgrounds were commented on by members of the Lakeside community in ignorant or disrespectful ways,” they continue. “These experiences are painful and alienating.”

The founders of @BlackatLakeside (BaL), who describe themselves as “Black alumni from different socio-economic and cultural backgrounds,” chose as a central question for their account, “How was race taught, discussed, and experienced at Lakeside?” Their answer: not properly. “We felt that while race was taught in history classes, people rarely wanted to discuss race in the context of current events and experiences on campus.” With this framework in mind, they started their account, which currently displays 25 stories of racism from Lakeside students, alumni and teachers, along with “a small backlog” of testimonies still to come.

@BlackAtLakeside is modeled on successful precursors. The original @BlackAt accounts sprung up in New York City in early June, after George Floyd’s murder touched off a national racial justice movement. High schools like Brearley, Chapin, and Dalton may be unfamiliar to those outside of New York, but they have a lot in common with Lakeside: selective admissions, high rankings in their state, famous alumni, and, according to @BlackAt accounts, decades of institutional and individual racism. @BlackAt accounts quickly appeared across the country at other high schools, universities, and even some corporations, most of them prestigious and predominately white.

BaL had to make a few key decisions about how to run their account. Unlike some @BlackAt accounts, their posts redact all names. “Our intention as a platform is not to name-shame students, teachers, or administrators,” they explain. “By redacting names, we also preserve the anonymity of the individual sharing their story.” By nature of soliciting anonymous testimonies, there is also no way to fact-check or confirm the identities of any submitters. Instead, they put their trust in the submitter to tell the truth to the best of their ability.

Their most significant choice in planning their account was to form a sister account, @NBPOCatLakeside (NBPOC stands for non-Black people of color). Many @BlackAt accounts post accounts from all BIPOC, but BaL thought it was important to make a distinction. “Having a separate platform to share Black stories ensures that we are heard and our voice is not diluted by the experiences of other minority groups. At this moment in time, addressing racial injustice against Black people should be made a priority.” But, NBPOCaL adds, “We didn’t want to leave other important experiences unheard.”

Social media activism has benefits, like anonymity, but it’s not easy. While the response from most students, according to NBPOCaL, has been “overwhelmingly positive,” the accounts have also received hate messages. These range from submissions claiming Lakeside has already eliminated all racism to messages that BaL is actually perpetuating racism against white people (which, by definition, does not exist). One community member wrote that white faculty and staff “live in fear of angering a ‘black’ person, even with a ridiculous ‘microaggression’ or anything that can be easily twisted into a racial conflict.” Submissions like these are sometimes bizarre (why the air quotes around “Black”?), but to BaL, they are evidence that Lakeside has a lot of work to be done. BaL also points to the video that recently surfaced of a 2020 Lakeside graduate saying “Black Lives Matter is a lie.” A BaL team member says, “When even one student with racist ideologies slips through the cracks and leaves Lakeside with a diploma, Lakeside has failed its mission and its students.”

The years attached to the accounts’ posts point to the persistence of racism on campus. The earliest submission is from 2002, the most recent from 2020. Another BaL team member explains that including years was a deliberate choice. “I feel like it’s easy for people to see the story posted and say ‘Yeah, but that’s probably from decades ago. That’s not the reality of being on campus today.’” Adding dates, most from within the last 10 years, shows that the problem is current, while a comparison with submissions from the 2000s shows that little has changed. “Maybe racism isn’t always as explicit as it was two decades ago, but it is still prevalent at Lakeside,” says the team member. One alum from the class of 1992 wrote to the account to say, “I’m sad to see that students are facing some of the same issues my peers and I faced almost 30 years ago.” To BaL, this lack of progress makes it clear that something needs to change at Lakeside.

The response from the administration, however, has fallen short of their expectations. “The extent of what we have seen publicly is their one Instagram post that they promise not to silence @BlackatLakeside. How are you really ‘committed to improving the experiences’ of BIPOC members of the community?” asks NBPOCaL. They explain that Lakeside’s much-touted diversity metrics are only a small part of successfully fostering an inclusive environment. They want Lakeside to hold themselves to some tangible goals—and the onus is on the school, not student and alumni activists, to create them. BaL suggests a gap analysis, “a method used to assess current curriculum, doctrine, programs, and resources to determine the necessary steps to ensure that an institution or business is meeting its mission statement.” Both accounts make it clear that sharing stories is a first step, not a solution or even a complete picture of racism at Lakeside.

That begs the question, what is the true benefit of @BlackAt accounts? The language of social media activism is often nebulous: what is the tangible result of “raising awareness,” as so many campaigns aim to do? It’s hard to deny that Lakeside’s accounts have reached a broad audience—BaL has over 1,000 followers while NBPOCaL has about 600—or that they have shown many white students the daily hardships BIPOC students face. But how do you translate increased understanding into lasting change?

Both accounts are aware of their own limitations. In the words of NBPOCaL, “The immediate extent of social change our pages bring is collective awareness (or “consciousness raising”) of systemic racism that occurs at elite institutions—but it is no way a means of sustainable change. Our anti-racist efforts of highlighting BIPOC voices must be supplemented with the efforts of the administration.” For them, it always comes back to institutional change, which students and alumni can call for but only the Lakeside administration can create. NBPOCaL says, “We hope that our pages serve as a pervasive call to action for Lakeside to commit to change beyond a simple post or words of support.”