Yes, Lakeside’s Julia Schlaepfer Is Alice On The Politician 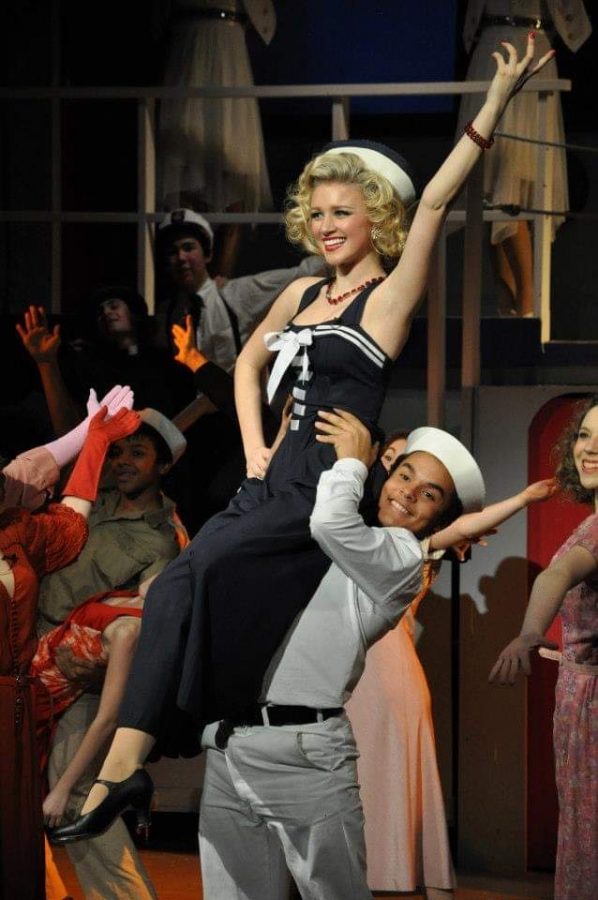 Julia performing in Anything Goes as a senior at Lakeside. (Schlaepfer)

I can’t stop watching this GIF of Julia Schlaepfer. She’s wearing a pink shirt, pearls, and black sunglasses; it’s a Jackie Kennedy vibe, which is fitting, considering that’s where Schlaepfer got the inspiration for her character. But Schlaepfer’s deadpan, emotionless delivery of her iconic line–“That I’m a stone-cold bitch with ice water in my veins?”–is not at all typical of a First Lady. It’s a beautiful choice, and I am so here for it.

Surprisingly, Schlaepfer only entered the drama world as a high school junior. For most of her middle and high school life, her dream of being a professional ballerina meant she had little time to devote to other extracurriculars. When you leave Lakeside every day at one to go to rehearsal, it’s impossible to audition for the school musical.

In eleventh grade, however, Schlaepfer was seriously injured and had to pause her training. It was then that Alban Dennis, Lakeside drama teacher, suggested she take part in the Young Actors Intensive (YAI) at Seattle Children’s Theatre.

As a result of YAI, which offers conservatory-style, college-level training, Schlaepfer completely switched paths. She stopped taking ballet classes and–with only a year of drama experience–began preparing for college auditions to top-tier acting schools. Naturally, her parents were terrified. “But Alban reassured them,” she laughed.

As she began prepping for college auditions and got one of the leads in the school musical, Schlaepfer became incredibly close to her drama teacher: “I would cry to Alban every day; I’d ask him: Am I good enough?” she said. He always assured her she was. “He’s the one who totally changed my life,” she said. “I owe everything to him.” And their hard work paid off: Schlaepfer received admission to NYU’s drama program, attended the university, graduated, got an agent, and the rest is history.

Well… not exactly. Schlaepfer, like many actors, faced rejection. “When I graduated from college, I made my entire life about auditioning. I was obsessed,” she said. “It hurt me a little bit because every rejection was earth-shattering.” She found herself burned out as a result. “It took me a while to find the joy in each and every audition. I have to remind myself that this is my opportunity to act today!” she laughed. “Sometimes, it’s still hard to face rejection–you want a specific role so badly. But you have to trust that your moment will come.”

And Schlaepfer has found her moment. After a role in Madam Secretary and Charlie Says, a New York Times Critic’s Pick about cult leader Charlie Manson, she’s become a fan favorite on The Politician, a Netflix TV show directed by Ryan Murphy and featuring a star-studded cast with the likes of Ben Platt and Gwenyth Paltrow. For those of you who haven’t already binged the show, The Politician centers around Payton (Platt), a high school boy running for class president (which is just a stepping stone to his eventual goal of President of the United States). Schlaepfer plays Alice, Payton’s girlfriend and future First Lady.

“Ryan Murphy is the all-time dream person to work with,” Schlaepfer said. “He’s one of those people who will take a chance on a nobody; half of the cast are newcomers to the business. But he trusted us from the beginning.” Although Murphy is a big-name director, with shows such as Glee and The People v. O.J. Simpson to his credit, he allows the cast to make many specific acting decisions. For example, when Schlaepfer wanted to change her character’s voice and facial expressions, he wholeheartedly supported her. “He believes in us,” she said. “So he makes me want to believe in myself too.”

When Schlaepfer first came to set, she struggled with imposter syndrome, “The first season on The Politician, I constantly wondered why they chose me,” she said. She didn’t have years of acting experience; her rigorous high school ballet schedule also meant she lacked time to watch movies or musicals as a child, so she also lacked knowledge of acting history. Nevertheless, because of Murphy’s faith in her abilities, as well as the kindness of her fellow actors, Schlaepfer began to gain more confidence. “It’s a process of reminding yourself that you’ve earned where you are today. If you do the work, you deserve to be where you are,” she said. “Trust in what you bring to the table.”

To that end, Schlaepfer advocates for teens to avoid self-doubt: “That’s what holds people back,” she said. “If you want to do it, go for it and go all the way in.” And if, five years down the road, passions change, Schlaepfer says, that’s okay: “You can change what you want to do with your life. Life’s way too short not to do something that you love.”

As well, for her, it’s important to embrace uncertainty. When Schlaepfer quit ballet and turned to acting, she faced plenty of stress and nerves surrounding her decision. But she knew she had made the correct choice: “I was following my dream. I wouldn’t have wanted to be anywhere else,” she said. “It’s not always going to be easy–it shouldn’t be easy! But as long as you’re working towards what you want to do, or figuring out what you want to do, then you’re on the right path.”

Be sure to check out season two of The Politician, which comes to Netflix on June 19th! Trigger warning: If you choose to watch season one, please note that the show contains graphic depictions of suicide.