The Birds: You’ll Never Look at Seagulls the Same Way 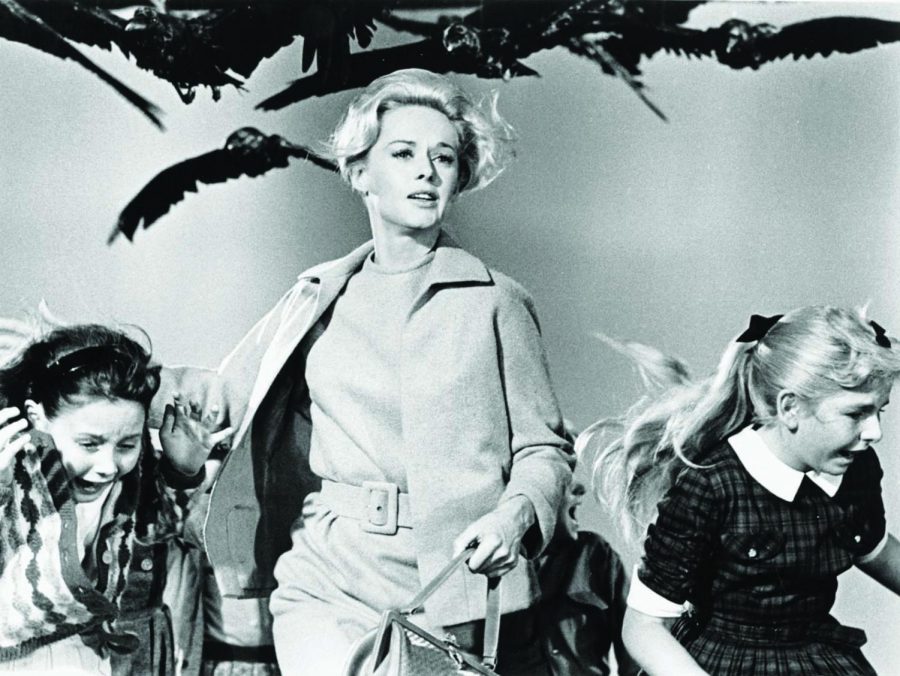 Note: In last month’s Parasite review, I made a mistake. Bong Joon-ho founded the Yellow Door club, not the Prometheus club.

Alfred Hitchcock’s The Birds is one of his most famous films, more famous still by the likes of low-budget recreations such as Birdemic: Shock and Terror and Birdemic 2: The Resurrection. (Yes, these are actual films. No, I have not watched them. No, I am not reviewing either. Try again in April.)

Recently I’ve been getting into the classics of filmmaking, and as of late it’s been Hitchcock films that have been on my radar. So why, you may ask, am I reviewing this instead of the objectively better Vertigo? Well, I’ve got a bit of a theme going right now (see my article in the Life and Culture section).

Alright. The Birds is a great movie. Made in the late periods of Hitchcock’s golden age, it is also known for being one of his most ambitious projects: he bought and trained several hundred sparrows, crows and seagulls for this movie. And watching this film again in 2020, 57 years after its initial release, makes this all the more impressive. The special effects, combining actual birds, puppets, and people, is seamless and surprising in their realism.

The Birds follows Melanie Daniels as she travels from San Francisco to the quaint town of Bodega Bay, partially to get back at lawyer Mitch Brenner, partially to flirt with him. She brings with her a pair of lovebirds, which she overheard Mitch wanting for his younger sister Cathy’s birthday. Of course, Melanie is convinced to stay, at least until Cathy’s birthday. She decides to stay with Annie, Cathy’s school teacher, who had previously dated Mitch but left because of his cold mother Lydia. Over the course of two days, strange behavior by the native bird population begins to worry Mitch and co. Yet, to their chagrin, nobody will take them seriously, even after being attacked by seagulls and hundreds of sparrows. Later, crows attack the school, divebomb a gas station shortly afterwards, and further chaos ensues.

The romance is, of course, second-place to the actual birds, but to be honest, it’s actually pretty fun. The two leads work pretty well together, and the dialogue flows pretty well. The language is a bit strange, but the execution and the nostalgia of the 60’s makes it work. Plus, there’s something unique about Hitchcock’s dialogue and the general feel of the era. Generally, I feel like Birds is both a generic girlfriend-seeking-mother’s-approval movie as well as a horror-thriller movie about birds. It lags a bit toward the end in terms of character continuity, but overall works to make us invested in these characters, which is the only thing you need in a horror-thriller movie.

The acting’s great too, though you have to take it with a grain of salt. There was a tendency in those times to make most men and women have roughly the same personality in every movie–the gruff, but loving man, the dependent but sweet woman, the well-mannered child–and you can see that here. I should give some points back for the age gap between Mitch and Cathy, it adds a bit of flair to the regular nuclear family stereotype. Of course, there’s also the usual tendencies of romances to have extremely convenient coincidences, such as the butler letting Melanie know that Mitch is in Bodega Bay, Mitch and Melanie knowing each other from a court case, basically everybody in town knowing exactly how to get to Mitch’s estate. Although these tropes are kind of overused, I think it rather adds to the charm of this classic 60’s film. Plus, most of the women are surprisingly progressive for the ’60s.

Of course, there’s the actual horror element. Now, strictly speaking, The Birds isn’t really all that scary. There’s no gore, no birds shrouded in darkness, no jumpscares. It instead relies on visual storytelling and the idea of being swarmed by hundreds, maybe thousands of small animals with no regard for their own safety, only to harm you. The birds themselves aren’t exactly terrifying, it’s the ominous way you can see them crowding around certain areas, recently-dead seagulls stuck in broken windows, thousands upon thousands of crows, seagulls, and sparrows all sitting in one place, the risk of them all pouncing at once thick in the air. One especially chilling moment happens near the middle of the film, right after the sparrow attack. Lydia drives a truck to a friend’s house and walks in. She discovers, almost immediately, that all the teacups are broken. She creeps through the hallway, eerily quiet. She turns to the bedroom door. She sees the window, broken, with a dead seagull stuck into it. Another cut, and we see the neighbor’s corpse, eyes bloodied pits. The anticipation, the signs of a struggle, the soundless and musicless environment all lend to a kind of terror that leads to horror as you realize how terrifying these birds are. These are the same birds you laugh at when you see a seagull wrestling a bag of chips away from a kid on the beach.

You have to give Hitchcock credence to make birds, birds of all creatures terrifying. Sure, there’s Cujo and Jaws, but nothing matches the thumping of thousands of birds trying to peck their way into a barricaded house.

The characters make reasonable choices, the action is great, and there’s just something so great about seeing this horror-terror movie from the 60’s still holding up today. Although definitely not one of his greatest films, The Birds is a great intro to Hitchcock movies.