Pandemics in Perspective: A Historical Look At COVID-19 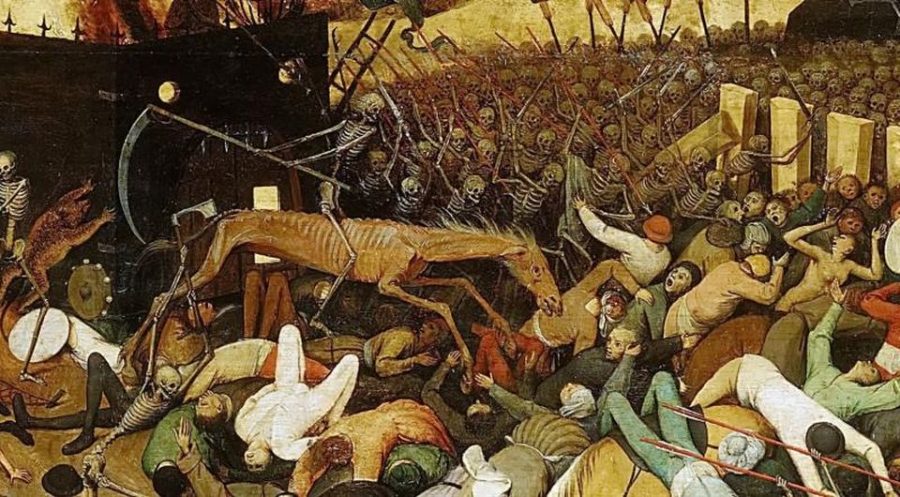 'The Triumph of Death', a painting inspired by the Black Death(Pieter Bruegel)

Nearly a century ago, countless people lived through one of the biggest pandemics ever, a flu that wiped out over a million people in two devastating waves. Right now, as we hope to contain our generation’s pandemic, history might offer some useful lessons. At the very least, it gives us something to compare our quarantine to, and see how the people of other ages dealt with their turns on the chopping block.

On April 23rd, our president suggested bleach injections and UV exposure as a coronavirus cure, ideas that resemble the quack cures of desperate 14th century Europe. By the 1350s, the continent was under the thrall of the devastating Black Plague. Whereas most estimates put COVID-19’s mortality rate around 5%, the Black Plague wiped out around half of Europe in just a couple years. Although our current lockdown has gone on since the beginning of March, the word quarantine comes from the 40-day periods used in Italy to prevent the plague’s spread. Cures for the Black Death included religious flagellation (self-whipping), rubbing pigeon insides on sores, and urine baths, none of which worked. In the absence of modern medicine, the plague ripped through medieval Europe quickly and brutally, burning itself into our collective consciousness as the worst disease in history.

COVID-19 has been described by doubters as “just the flu,” referring to the mostly harmless seasonal disease that causes fever, cough, and aches, affecting around 8% of the U.S. population each year. In the late 19th and early 20th centuries, a more dangerous flu wreaked havoc on the world, aided in its transportation by an increasingly interconnected, industrial world. An influenza virus known as the “Asiatic flu” or the “Russian flu” blew through Europe in 1889, taking just five weeks to kill a million people. Some estimates say coronavirus could reach similar death tolls in the U.S., although these numbers differ from source to source. In 1918, cramped wartime conditions allowed a similar influenza to wreak havoc. It was known as the Spanish flu because that country’s journalists broke early stories on the virus, and its second wave was even deadlier than its first. The flu infected an estimated 500 million people and killed 50 million worldwide. The 1918 outbreak has stood unequalled in the 20th century as one of the deadliest pandemics in history.

It’s grim to think about the death tolls and long-term effects of coronavirus, but a historical perspective shows that we’ve already been through much worse. While COVID will likely pop up in its own history books a couple decades from now, modern medicine and quarantine measures will ensure that it doesn’t reach the catastrophic level of the Black Plague or Spanish flu. You may be stuck inside the house, but at least you’re not having urine and pigeon guts rubbed on you in 14th century Florence while all your friends drop dead around you. The most important thing in a time like this is to be sensible and listen to the science. We’re all getting through this as a people, the way other civilizations had to in the past, and sometime in the future we’ll look back on COVID-19 the same way we look at the Black Plague: as a distant, unpleasant event.