The Phantom of St. Nick’s is Here, and it’s Hungry 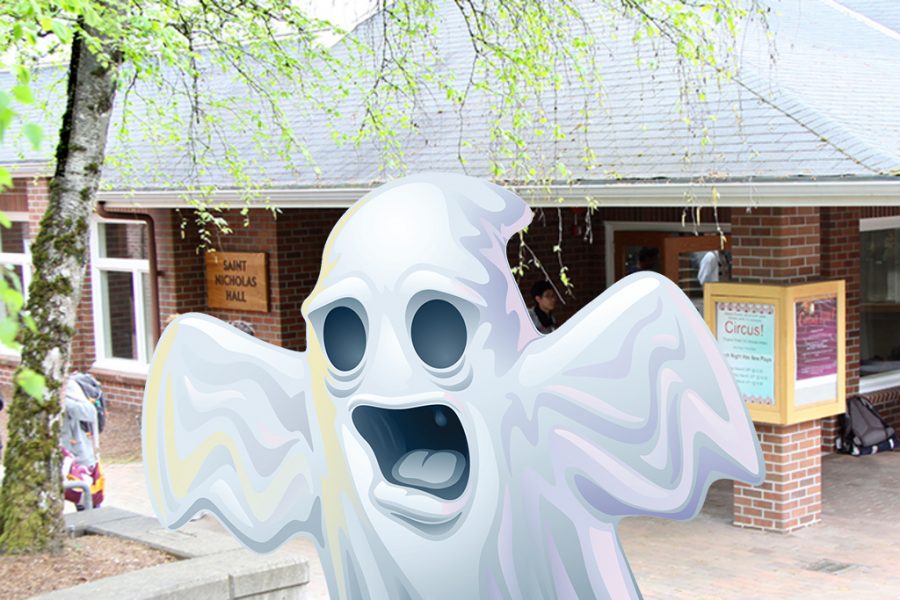 Move Over, Phantom of the Opera!

The Phantom of St. Nick’s Is Here And Hungry.

Lakeside Drama remains a hotbed of unanswerable questions. What was up with that ant situation in 2018? How long has that dressing room couch been there, and what would happen if you shined a black light on it? What is being done with the money given to the theater department? Finally, we know the answer to one of those questions.

Starting in October, during rehearsals for As You Like It, student actors reported hearing strange noises come from under the stage. A curious student, who has asked to remain anonymous, was the first to brave the unknown and peer under the extensions.

“It… I can’t describe it,” said the student, their eyes filled with a strange kind of darkness. “Imagine if Patti LuPone and Andrew Lloyd Webber were conjoined twins. Imagine that Audrey II was nested in Andrew Lloyd Webber’s mouth. Webber and LuPone are both wearing costumes that Chicago rejected for being too risque. They sneeze glitter and have spike tape for hair. But somehow, it’s 10 times worse.” The student then learned that half the budget of Lakeside’s theater department was being fed to the monster, who really seems to have an appetite for twenties.

The Advanced Theater Production class has been tasked with caring for this monster. I had the chance to speak with a student last weekend. I brought along a few fifties as payment.

“Hmm,” said the Theater Production student, testing a platform set-piece by bouncing up and down. The wood planks creaked and bent under her feet. Sawdust fluttered onto the stage, lightly dusting the broken twist ties and bent nails on the floor below. The screws holding the platform to its beams seemed to be crying for help, and the 2×4 columns the platform was supported by swayed gently. I went to join her. “Actually, we shouldn’t stand on this,” she said, hopping down from the set-piece and leading me to the edge of the stage.

She lifted the curtain on the stage extension and, amidst the low growling coming from within, grabbed my wad of fifty dollar bills and thrust it under the stage. “RUN!” she yelled at me.

We ran out the stage left garage door and all the way to the quad, where she explained the monster’s care.“We feed Greg once a week. Oh, yeah, we’ve started calling it Greg. We tried to put a litter box under the extensions, but it hasn’t really seemed to work. We keep finding massive wads of spike tape around the theater. It has to be related, right?” She paused to catch her breath, then added, “The growling gets a little annoying when the actors try to do intense emotional scenes, but we make do.” No word yet on if “Greg” will start offering voice lessons to orphaned mediocre sopranos, but anything can happen in Lakeside’s Drama Department.

UPDATE: I have finally seen “Greg.” I cannot stress this enough. Do NOT seek him out.

UPDATE TWO: I can’t find my wallet. I’m sure it has something to do with Greg.

UPDATE FOUR: If you’re reading this, feel lucky, and run, now. You don’t have much time, go beforojaifsafjk