Bookends: Reflections From Either End of the College Process 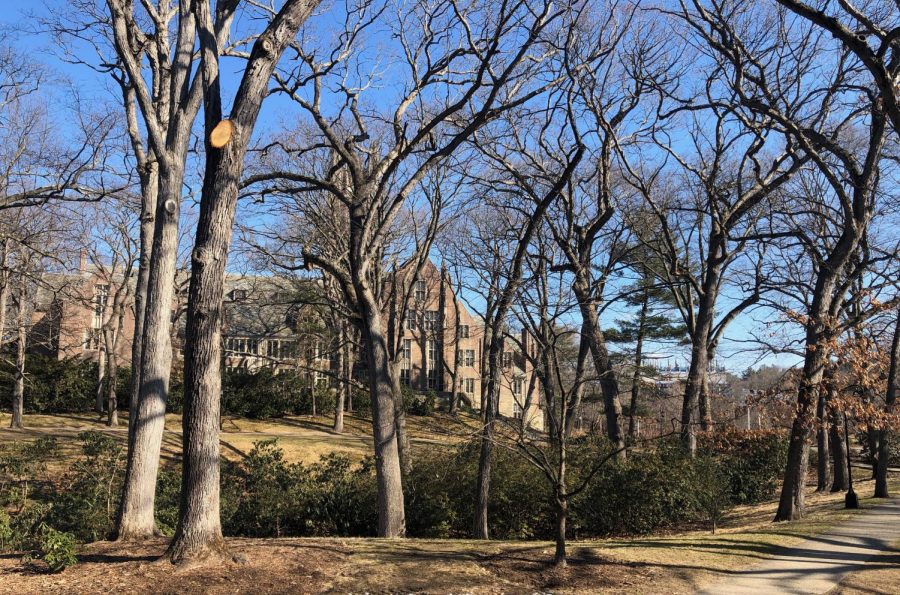 March marks an interesting time for upperclassmen. It is, for some, the time when the college process really gets rolling, with tours and research slowly infiltrating the minds of the juniors class. Meanwhile, for many seniors, March is the month when colleges start sending back news, and students are finally able to celebrate the true end of the terror that is college admissions. As such, in this March issue article, junior Lauren R. and senior Isabelle Q. both reflect on college admissions experience from either ends of the process.

Lauren: Over mid winter break, I headed to frigid Massachusetts to tour colleges in the area. I also decided that, since there was a school in New York City that I really wanted to see, we’d drive down and see a few schools there as well. It was my first time officially touring colleges, and the long car rides between each gave me plenty of time to reflect on what I’d seen and my feelings towards the college admissions process.

I toured a lot of small liberal arts colleges. That was more my cup of tea, but I wish I had seen at least one really large university, and I wish I had seen more schools in completely urban areas. The pro to seeing a lot of schools of similar size and that were all liberal arts was that I could easily compare them to one another. I was able to quickly decide whether I liked one over another for reasons that didn’t relate to the location, size, or curriculum. I found it hard to compare the city schools to the college town schools, just because the campuses were so different.

I officially toured seven schools, but there was only one I really disliked. Everyone at that school seemed to be thriving and having a good time, but it wasn’t for me. I felt like everyone there was a very specific type of person, a type of person I never have been and don’t think I will ever be. It was definitely also the most unique school I toured in the way its curriculum is structured. Despite how much I wanted to leave during the information session and how many times I checked my watch to see how much longer I had during the tour, I’m ultimately glad I visited the school. I think it was valuable to identify what exactly it is that I didn’t like about that school and what it was about other schools I appreciated.

This trip didn’t come without regrets. One of the schools I initially planned on touring Monday ended up being closed for President’s Day, so I just did a self-guided tour. Huge mistake. The amount of strange looks I got from students on their day off who weren’t expecting to see a teenage girl and her dad on campus were innumerable. I felt like I was trespassing, and it was overall an awkward experience. As an athlete, I wasn’t so on top of contacting coaches at the schools and letting them know I was doing a visit.  Another huge mistake. It worked out for the most part despite my last minute emails, but there was one school especially I regret not scheduling a time to talk to the coach. I ended up peeking in on a practice from the balcony of the athletics center after a (very helpful) student swiped me in, but I again definitely felt like an interloper.

Towards the end of the trip, I got worried: the schools I saw that I liked the most were highly selective. I started to doubt my academic achievement and wonder whether I’d be able to actually attend any of these schools. I know I will get into a college, but I was worried that I’d face pressure if the school I end up at isn’t “good” by some people’s standards. I know I am ridiculously privileged to even have the resources that allow me to even have a chance at college, but I can’t help but feel like I’m setting myself up for disappointment by really liking schools that happen to admit less than 20% of people who apply.

Isabelle: I have gotten so much advice about the college process. Advice like, “don’t fixate on just one school,” or “start your applications early,” or “keep your expectations low.” All this is advice that I would highly recommend to anyone who is starting the college process. (Hypocritical though that may be, seeing as I definitely failed to follow every single one of those suggestions). But I know you’ve probably all heard these a million times, and you’ll definitely hear them a million times more. There’s no point in me repeating them.

There probably isn’t much for me to say about the college process that would be news to anyone. I don’t really feel like I have any additional wisdom or insight with which the college counselors aren’t already well acquainted. But I do think there are a few major things that I have learned over the past few months that may be of use to anyone who is interested.

The first is that writing all those personal essays can be an incredible opportunity if you want it to be. I struggled to write the personal essays because I’m a procrastinator and a perfectionist (two things which don’t work well together) and also because the constant production of so many two-hundred-fifty word narratives both exhausted me and made me feel disconnected from my own voice. And yet, somewhat paradoxically, I think the process of writing those essays was actually really beneficial — not just in the context of applying to college, but on a much more personal level as well.

Going through the different events of my life, searching inside myself to figure out why things mattered to me, why my passions were my passions, why my values were my values…that was, in the end, an extremely important experience. I felt like I could recognize the central themes of my own life, and I could see how so many of my memories tied into those themes. Writing those essays acted as a way for me to really understand what was important to me. It allowed me to declare, in a surprisingly clear portrait, who I was as a person. I felt like I was almost analyzing myself in the way that I might analyze a novel. I could construct a narrative out of my life, and that narrative had meaning and purpose, and it gave me a sense of direction for what I wanted in the future.

The second thing is about rejection. At least half of the advice that I got during the college process was advice trying to protect me from the pain of rejection. Keeping expectations low, not devoting myself to one school, remembering that getting in/not getting in had nothing to do with my self-worth or quality as a person, etc. But like I said before, I didn’t follow any of that advice. And so, when I was deferred by my early school, it really hurt.

Throughout the second half of December, I kept coming back to this idea of deserving. It was definitely a pretty entitled mindset, but I couldn’t prevent this feeling like I had deserved to get in. I kept on adding up all the time in my head, all the time I’d spent working and studying and practicing, and I felt overwhelmed by this sense that it wasn’t fair. I held onto this idea of unfairness so tightly, in part — I think — because being angry at the injustice allowed me to stave off the looming whispers that kept telling me that I simply wasn’t good enough. That I wasn’t smart enough, hadn’t worked hard enough. That I just didn’t deserve it.

But now, months later, and with a little more perspective, I realize that — to a certain degree — maybe the idea that an acceptance letter is something deserved is kind of irrelevant. Because in the end, you’re not the one who gets to decide who deserves what. You don’t even get to decide what “deserving” means. What are the things that give a person the right to a certain school? Those things might include grades or standardized tests. Those things might include legacy status or big donations. Ultimately, you don’t get to decide which of those things constitute deserving. The school does. And yeah, I guess that is pretty unfair, but it’s the truth. In the end, maybe the easiest thing to do is send your application off and put some hope into the possibility that you’ve got the thing they’re looking for. This isn’t to say that you should go into the whole process with a defeatist attitude. Not at all. But I do think it’s good to keep this perspective in mind. Even though I don’t think rejection will ever feel easy (and here’s hoping you won’t have to face it), maybe remembering this could make it hurt a little less.

Of course, feel free to ignore the advice that I just gave you. I probably would, and I’m still doing just fine.