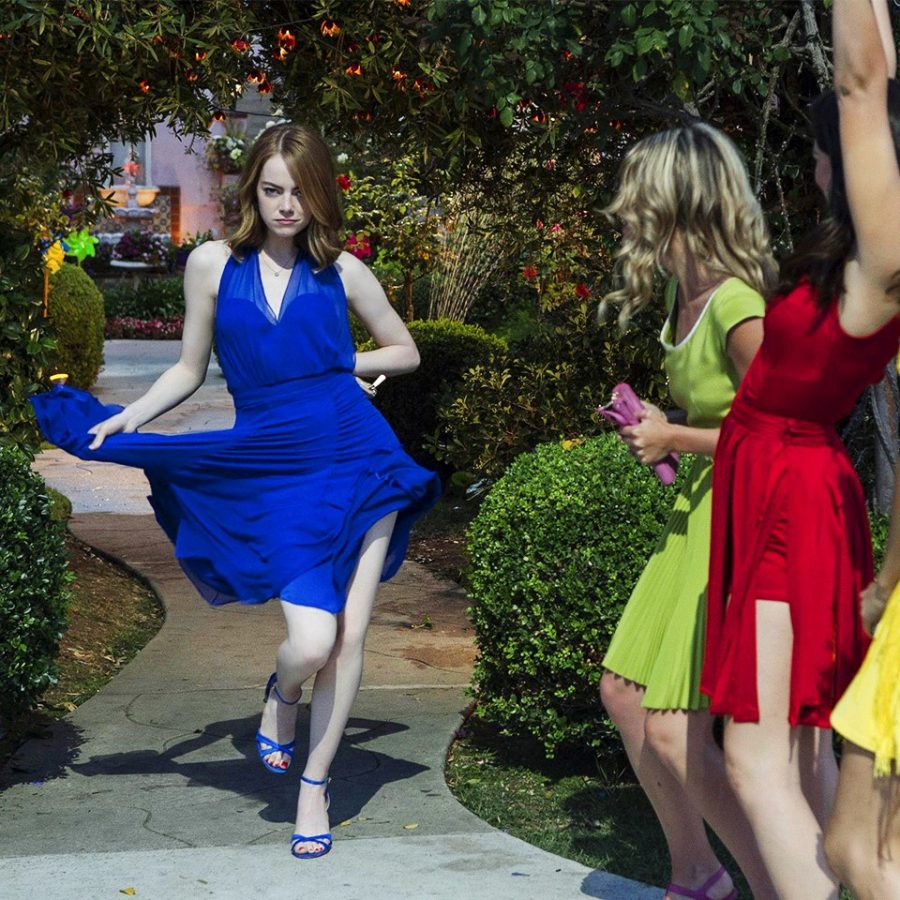 During the three years that I spent in middle school choir, we chose to sing “City of Stars” not once, but twice in two different years. You might think that having to hear the same melody over and over would render it “overplayed.” The fact that it never felt overdone is a testament to La La Land’s newfound status as a classic of cinema.

La La Land is a 2016 movie directed by Damien Chazelle (Whiplash, First Man) and composed by Justin Hurwitz. Emma Stone plays Mia Dolan, an aspiring actress working as a barista on the Warner Bros lot, fighting to be discovered, so that she can write and star in the kind of pre-Marvel entertainment that seems to be dying. Ryan Gosling is Sebastian Wilder, a jazz pianist hoping to someday bring jazz back out of the shadows.

La La Land is a lesson in cinematography and a prime example of good use of color. The entire first and second dance scenes are almost completely in primary colors; reds, yellows, blues. They are simple, almost child-like. They highlight the optimistic naiveté of Hollywood aspirations. All the colors are pretty, luxurious, and vibrant, but they are simple and separate; there is no connection or spirit. The only time Mia is shown in a non-primary color (orange), however, is during a scene in a bathroom when she has second thoughts about attending the party…that will lead to her meeting with Sebastian. Similarly, she steps out of the blue light of the Los Angeles sidewalk into the orange light of a restaurant where Sebastian is playing the piano. This secondary color signals a start to their complicated relationship.

Music works with the colors to amplify Mia and Sebastian’s relationship. The opening number, “Another Day of Sun,” is backed by primary colors, as does the “Someone in the Crowd” scene. But, the first time we hear “Mia and Sebastian’s Theme” is when the two meet and start forming a connection; there is a use of orange in the lighting and background during this scene.

Moreover, the music’s lyrics showcase the relationship’s development. “A Lovely Night” is somewhat subversive as a romantic song, since its lyrics are literally about how Mia and Sebastian would never be a pair, but also shows their unity and development; when dancing, they step in time and trade sections together. “City of Stars” shows how compatible the two are; they finish each other’s sentences and compose a song on the spot. But “We Can Start a Fire” is when things take a downturn, marked by the sudden wave of synth in the soundtrack and artificial, tech-y aesthetic.

Whether they show the beginning or the end of Mia and Sebastian’s relationship, every single song, theme, and lyric is an earworm that burrows into your brain and never comes out. In this movie, there is no such thing as a non-hummable song or a theme that you can get out of your head. The extensiveness of this ability to be remembered is demonstrated by the fact that I’m sitting here, writing about a movie from four years ago, because the music would not leave my mind. And if the permeability of the musical genre suggests anything, the film will not leave our collective psyche for a long time.