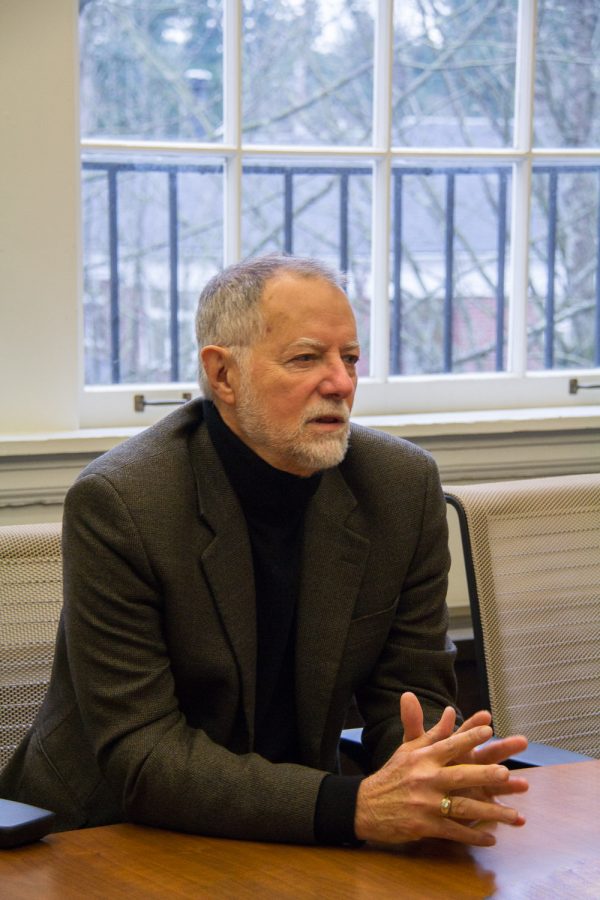 On December 18th, Dr. Robert H. Frank shared some of his thoughts on becoming an economist and what he wishes more people understood about his field. The interview took place in the Bliss Conference Room a few hours before Dr. Frank gave his all-school presentation.

Q: What made you want to become an economist and how did you go about doing so?

Dr. Frank: So I was a math major in college—I attended Georgia Tech—and it was under very unusual circumstances that they were extremely short-handed in the math department during my senior year. They asked me to teach a freshman math course, which I’m sure they’re embarrassed of now… I did it, I was completely in charge of the course—including the lectures, the tests, the grading, etc—and I so enjoyed that experience that I decided that I wanted to become a teacher. The next stop for me was to go to the Peace Corps, and I went to Nepal for two years… I didn’t think that I wanted to get a PhD in math because math seemed too solitary and too disconnected from the world. I was more outward-facing than most of the mathematicians that I knew. And like many other Peace Corps volunteers, I got interested in economic development, and so I applied to graduate school to study economics.

Q: What do you think is the best part about being an economist?

Dr. Frank: I think people have a very unrealistic impression of what economics can be… I think it’s become very mathematical and people are put off by that because it seems like economics is disconnected from reality… in fact, there are three or four basic economics ideas that can help people better understand what they see in the world. When I teach my introduction to economics classes, I like to give an assignment where students are asked to pose an interesting question based on something that you’ve personally experienced or observed and use those basic economics ideas to help answer that question. For instance, why do government regulators make you strap your toddler in to their seat when you’re only driving two blocks to the grocery store but they let you fly across the country with your toddler loose on your lap? This question was posed by one of my students, and the entire class found it really fascinating… the most common answer that he initially got from them was that if the plane crashes, everybody is going to die anyway, so it wouldn’t matter if the kid’s strapped in. However, the student knew that the true answer was something else—airplane companies started requiring seat belts long before the government did for cars because the more common danger for airplane passengers is turbulence—and eventually found that the cost-benefit test was a good way to answer the question. The cost of strapping a toddler in by buying an extra seat is far more expensive than the cost of using the seat belt in a car. Anyways, students do this assignment multiple times every year, and I find that students who ask the most interesting questions tend to stick with economics more than those who get bogged down in the math and the equations because they are able to see how economics is useful in their lives.

Q: How should we address climate change?

Dr. Frank: We will need to make big changes in a hurry to avoid the worst consequences… our window is definitely closing. However, it’ll be easier than most people think to make those changes. It’ll be expensive, but it won’t require massive sacrifices from individuals.

Q: What’s the most common misconception about economics and your work?

Dr. Frank: Adam Smith is commonly regarded as the father of economics, and many of his modern-day disciples think he said that all you had to do is turn selfish people loose in the marketplace and their attempts to serve their own ends will create the best possible outcome for society as a whole. That’s how they describe his invisible hand idea… but that’s not anything that Smith ever said. Smith’s contribution was that it’s interesting and important that oftentimes, you get good results for society as a whole when people act in their own self-interest. When companies try to beat their rivals by innovating, perhaps through cost-saving or product design, the rivals will often try to match that and the benefit of the innovations is ultimately felt by the customers. It’s an incredibly important idea, but if you’re critical of capitalism and you don’t understand that idea then you’ll be led in the wrong direction… I think what we now understand is that selfish interests don’t always lead to the best possible outcome for society. If you want to see better at an event, you stand up, but if everybody stands up, everybody sees the same as if everybody had remained comfortably seated. Without robust policy changes, we’re unlikely to see a change for the better in those situations—greenhouse gas emissions being one of them—but individual action is important too.

Q: What do you wish more Lakeside students knew?

Dr. Frank: I think it’s important for you guys to recognize how fortunate you are to be in such a rich learning environment… and if you are able to recognize that, that attitude will serve you well in the future. What we know from experiments is that people who recognize that they’ve been fortunate in their lives are more likable, sleep better, more likely to be chosen for promotions, and are healthier in general. Gratitude is an emotion that pays dividends in a whole host of different domains, and there is no cost that we know of to yourself to experience it. So even if you’ve had many bad experiences, it’s important to try to remain grateful for the good experiences.